Thirty kilos of cocaine found floating in the gulf

Iberia Parish Sheriff’s deputies have seized about 30 kilos of pure cocaine found floating in the Gulf of Mexico.

The ship’s captain reported locating a suspicious bundle floating in the water roughly 50-55 miles South of Southwest pass. He called the Department of Homeland Security, who notified the sheriff’s office and they met the boat at the Port of Iberia.

The package contained 30 individually wrapped packages of suspected pure cocaine each weighing approximately 2.5 pounds for a total combined weight of approximately 75 pounds (30kg).  The estimated street value for the narcotics recovered is more than $1,000,000. 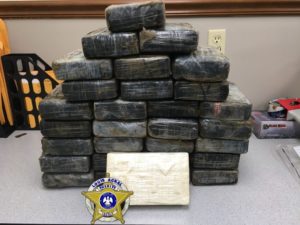 Investigators are working with federal authorities in an attempt to determine the origin of the cocaine. A spokesman said a common way to smuggle drugs into the states is for producers to drop bundles in the water, where they are picked up by drug dealers in the U.S.