More scattered storms Friday…but they will be moving

After flooding rains of 4-12″ or more and severe storms across a good part of Acadiana Wednesday night into Thursday morning resulting in the flooding across the region, there has been a bit of a break Thursday afternoon before another couple of rounds of storms will be on the way late tonight into Friday. 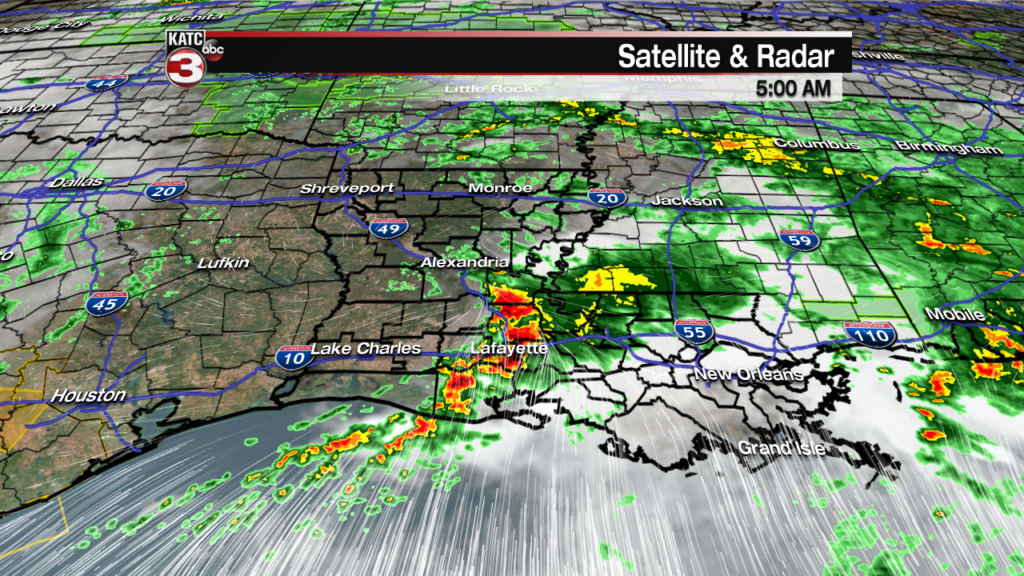 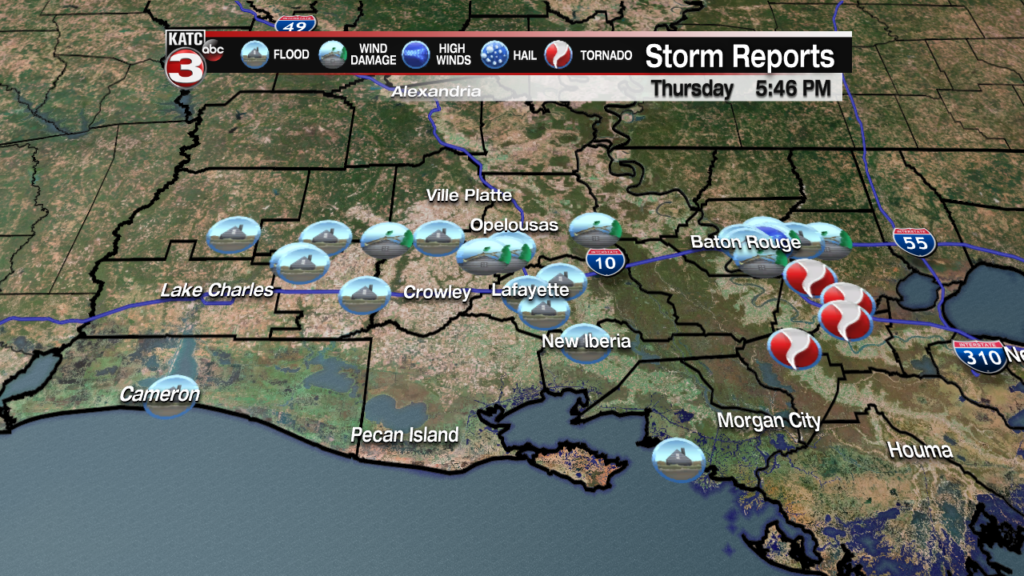 Fortunately, the next couple of rounds of  storms will be moving at a good pace, and additional widespread flooding is not expected.

However, up to a couple of inches of rain will be likely in spots, and with the grounds saturated, localized street flooding might be possible in a few areas. 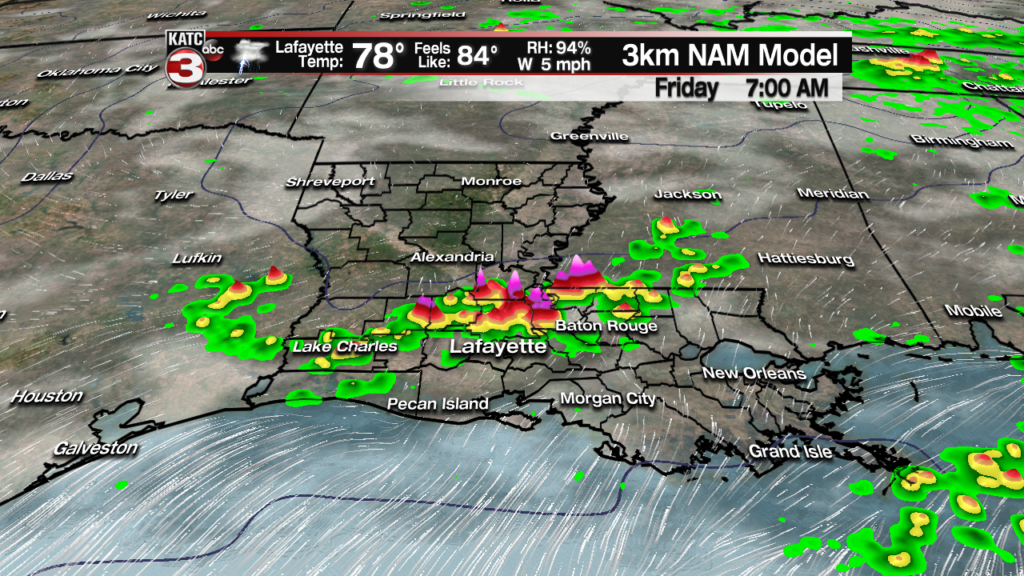 Expect a round of scattered storms approaching from the west to northwest overnight, mainly after midnight and closer to daybreak Friday.

These storms are being guided by the upper level system that drew the tropical disturbance northward into Louisiana over the last couple of days.

The upper low will be well east and have less influence over our area into this weekend.

After a brief, dry midday period, more scattered storms are expected later in the afternoon into the early evening. 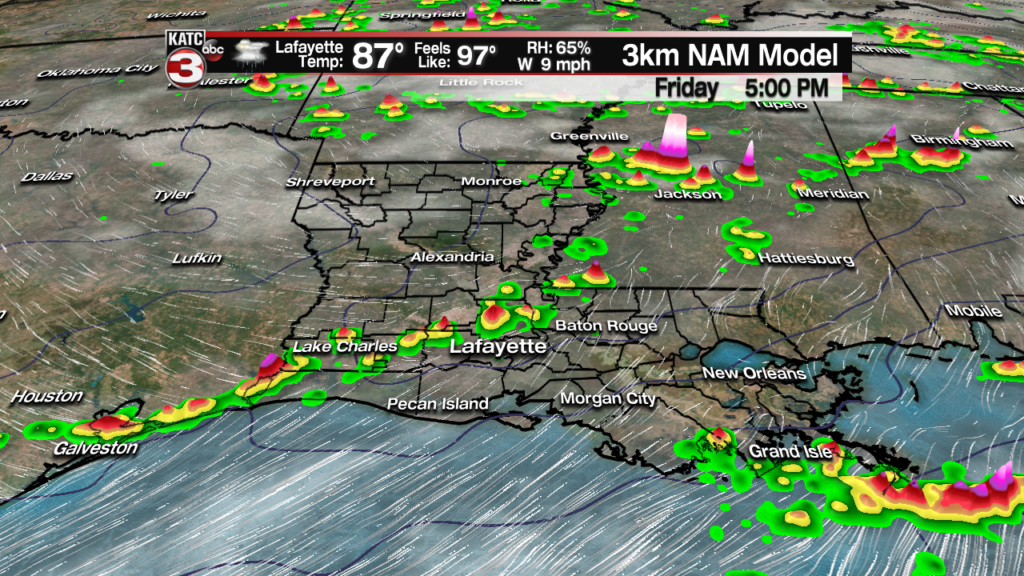 As mentioned rain totals shouldn’t be much more than 1-2″ in spots, with many receiving less and a few spots perhaps, slightly more, combining the rounds of storms. 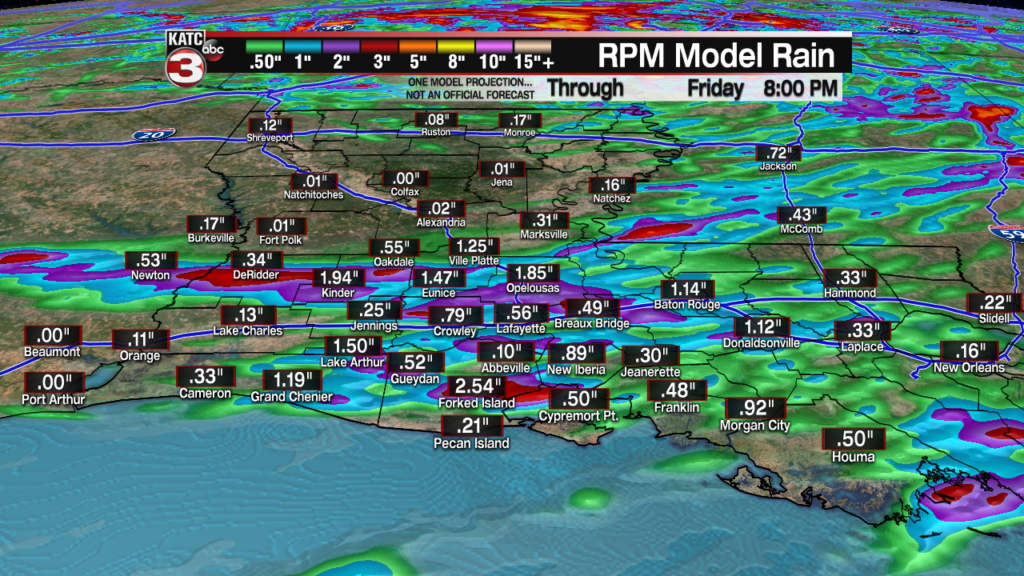 In addition to the rainfall Friday, per the Storm Prediction Center, Acadiana is hatched in for a marginal risk of a few severe storms that could produce damaging winds and/or some hail.

We may not have a severe weather “watch” for our area Friday, but that does not preclude the risk of a few severe thunderstorms from occurring in the area. 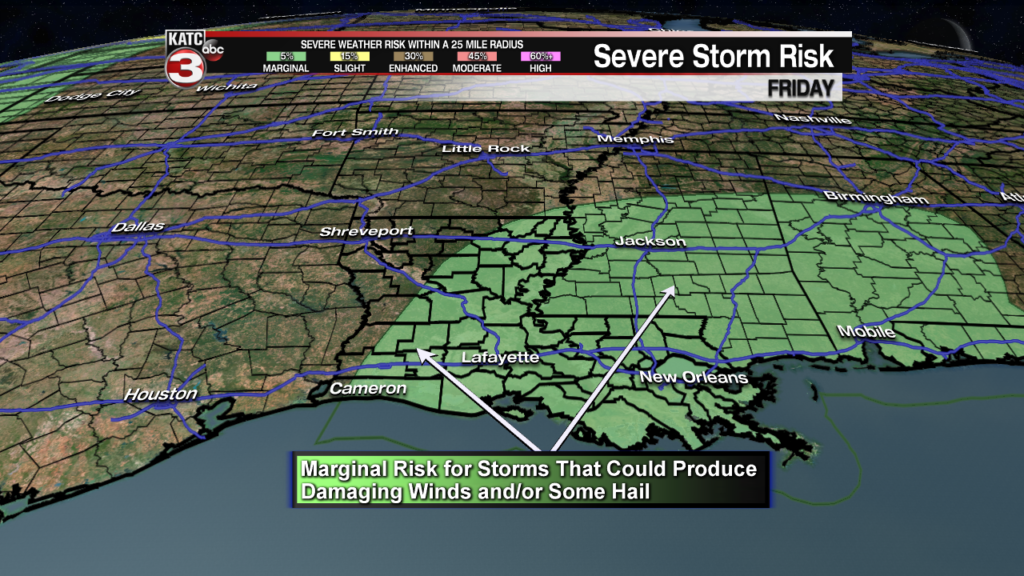 Finally, drier more stable air will begin to spill into the region this weekend with rain chances dropping to 20% Saturday, and less than that Sunday.

Temperatures will top out near 90 Friday and push back into the low-mid 90s this weekend.

Fortunately, a weak frontal boundary and building high pressure from the north will help usher in drier, more comfortable, and slightly cooler weather for mid-next week.

Unfortunately, the break from the summer heat will be short-lived, with high heat and humidity back in the area by next weekend…see the 10 Day Forecast for the latest.

Notes on the weather event Wednesday night into Thursday morning:

Based on ground truth rain gauge data, the doppler radar estimates were between 63-72% of actual rainfall. This can happen with tropical rain events and perhaps the wrong algorithm or coefficients in the model data. 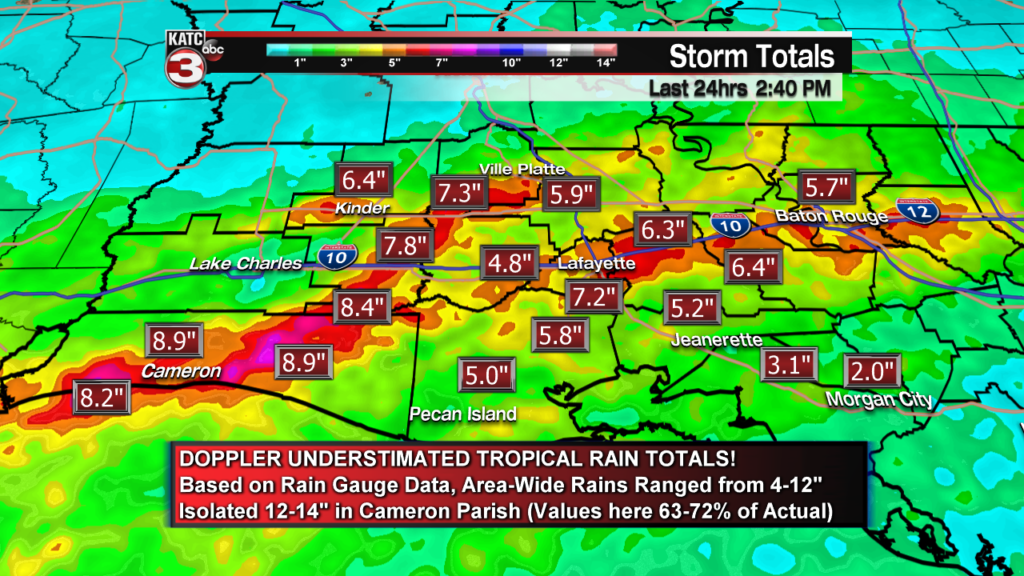 I had several rain gauge reports of over 10″ in Lafayette alone, and the highest I could interrogate in the parish was 7.2″.

So area-wide rains fell pretty close to model data forecast fields we showed in the days leading up to this rain event, with 6-13″ common from the southwest to the northeast across Acadiana.

The hot spot was in Cameron Parish, where highest rain gauge total found was 12.85″…so 14-15″ or a little more, likely fell on some alligators!

As for the Vermilion River, with rainfall rates as high as 2-3″ per hour for several hours in Lafayette, it was not surprising to see all the flooding in the city and parish, and consequently the high water in the Vermilion River. 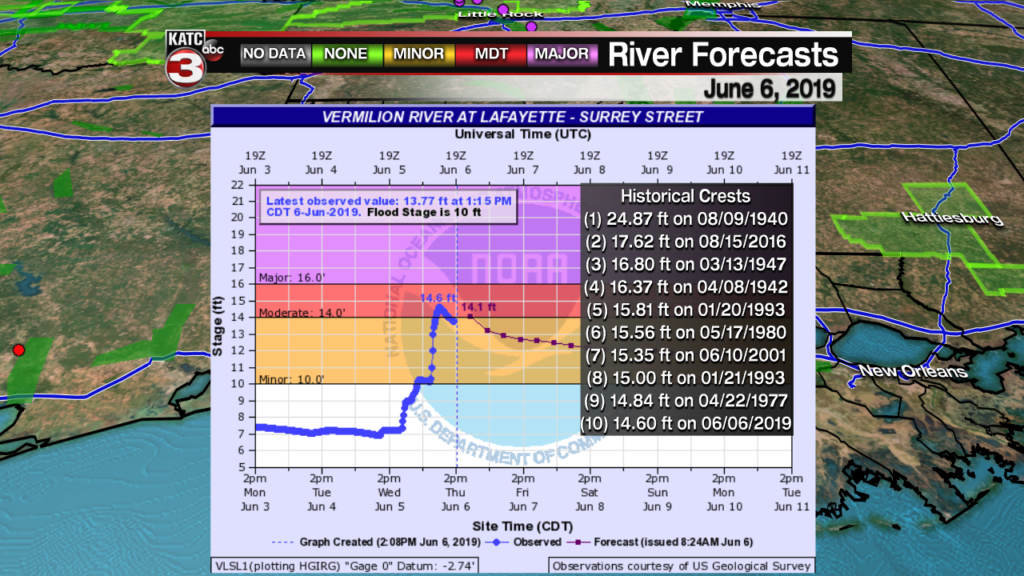 Although this system was not like the August 2016 event, the rainfall rates for this one period was very similar to the first day of that August 2016 event…problem then, was that we had a second day of the same, and then an additional 4″ of rain in the last hour of the event in Lafayette.

This is proof that it’s not just about rain totals, but rainfall rates which cause flooding.

Nonetheless, the Vermilion River crest at Surrey Street midday Thursday, made it into the top 10 of all time crests!

Fortunately, the river, after being high for several weeks, had dropped to 6.9 feet before the rains arrived Wednesday night!

After Friday, we should have a week or more of dry weather ahead…and that’s good news!