A Flash Flood Watch continues for all of Acadiana through Thursday evening. 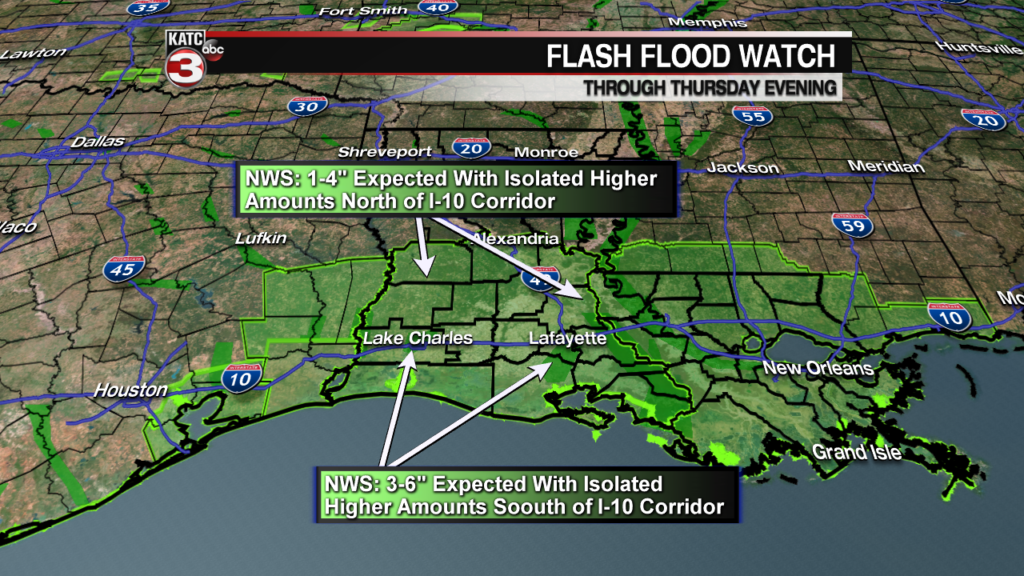 Heavy tropical showers and storms will continue to advance northward from the Gulf of Mexico as an upper level low moving in from the west strings the old Gulf disturbance northward through the region. 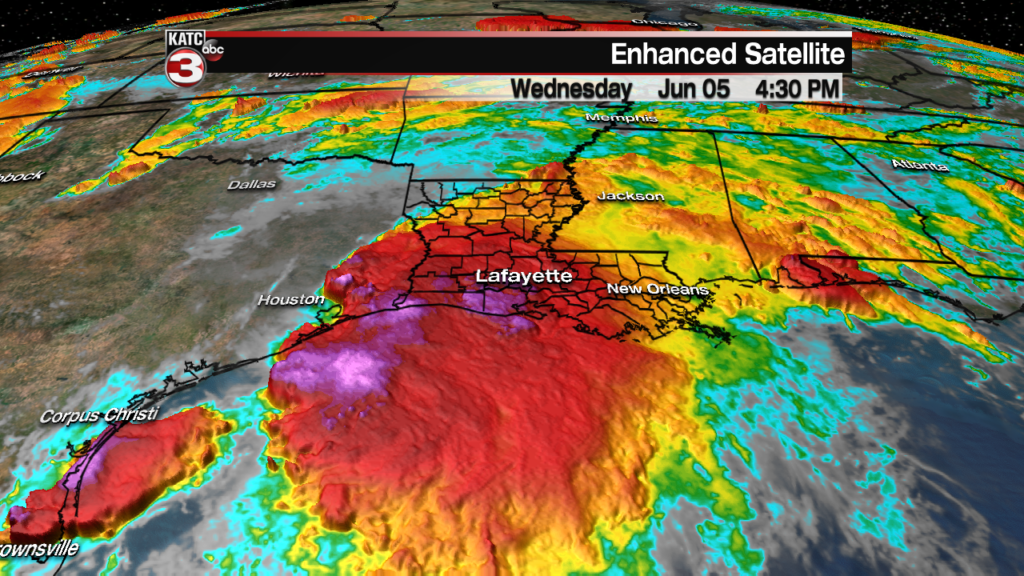 The threat of excessive rainfall and flash flooding will be possible as storms will be capable of producing anywhere from 2-6 inches overnight through Thursday morning with isolated higher amounts possible. 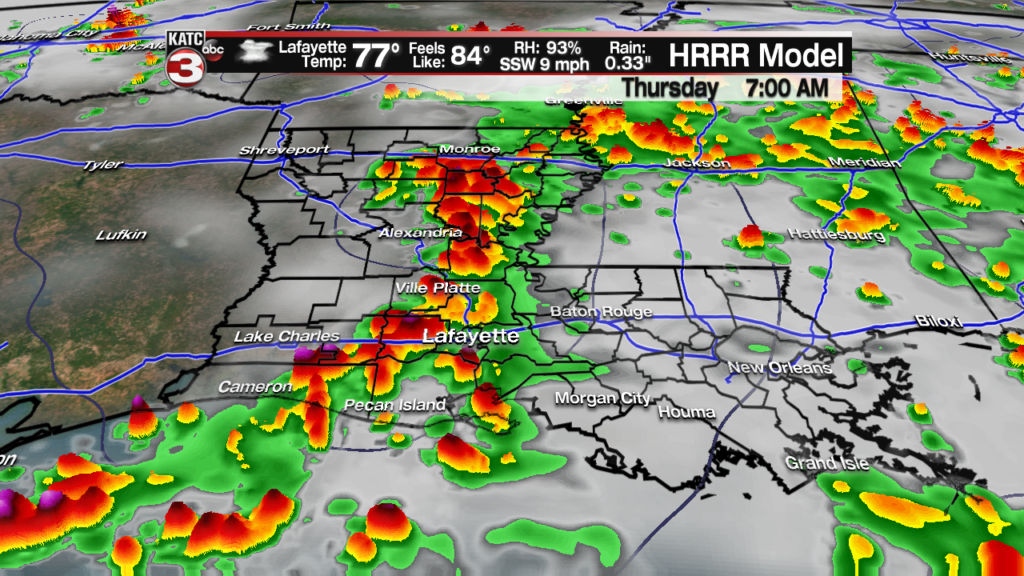 Areas most likely at the risk of flooding rains overnight will be across extreme Southwest Louisiana eastward, primarily along and south of the I-10 corridor/coastal Acadiana parishes. 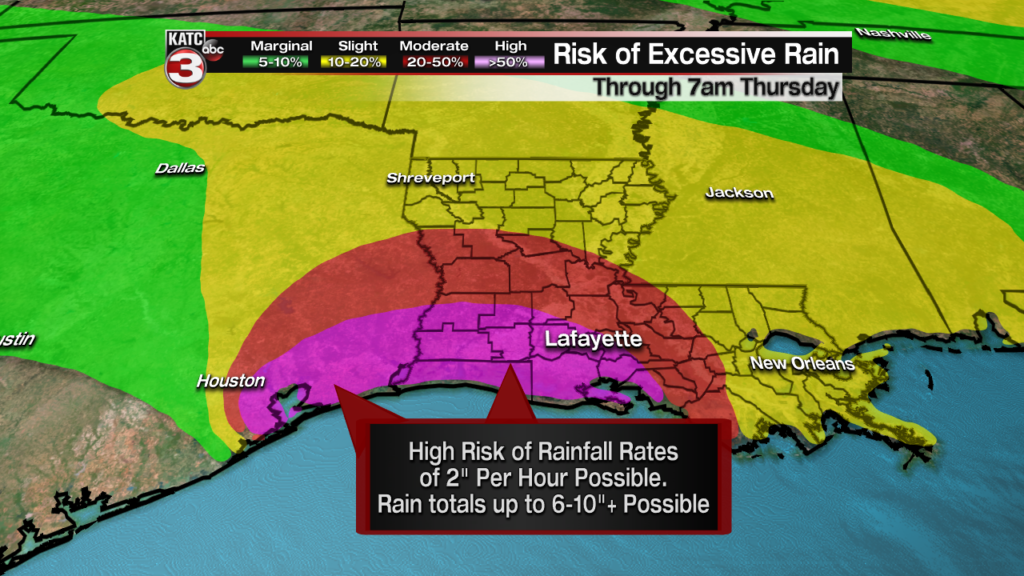 Interestingly enough late Wednesday afternoon, the high resolution models have been backing off from their biblical forecasts yesterday and this morning, but the only way this trend may occur is if storms remain heaviest in the Gulf of Mexico, and intercept some of the deepest moisture advancing into Louisiana. 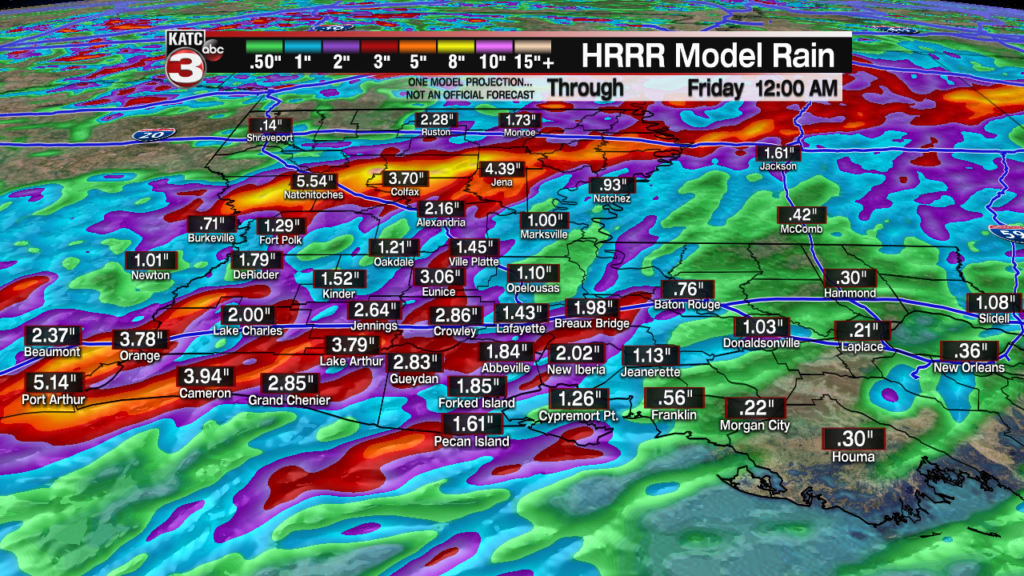 We hope this is will be the trend, but we cannot buy it hook, line and sinker quite yet. 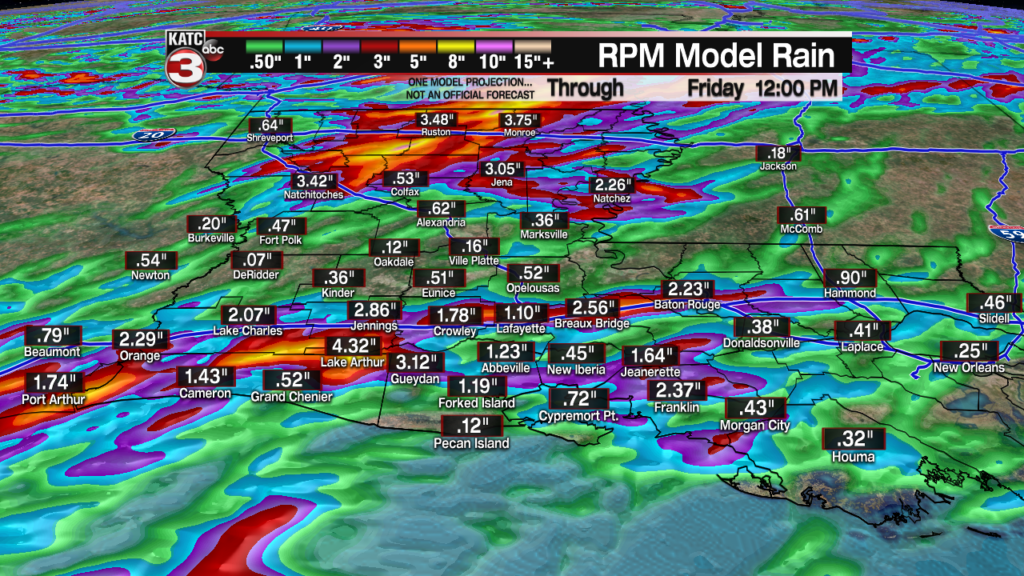 Nonetheless, localized street flooding will be possible in many areas overnight tonight through tomorrow morning. Some flooding of homes will certainly be possible, but where, remains impossible to predict.

It appears the heaviest of storms will begin to advance off to the east by Thursday afternoon, but several more rounds of showers and storms will be possible Thursday night into Friday but these storms should be moving at a much quicker pace (from the northwest to the southeast), so an extended flood threat beyond Thursday is not anticipated at this point. 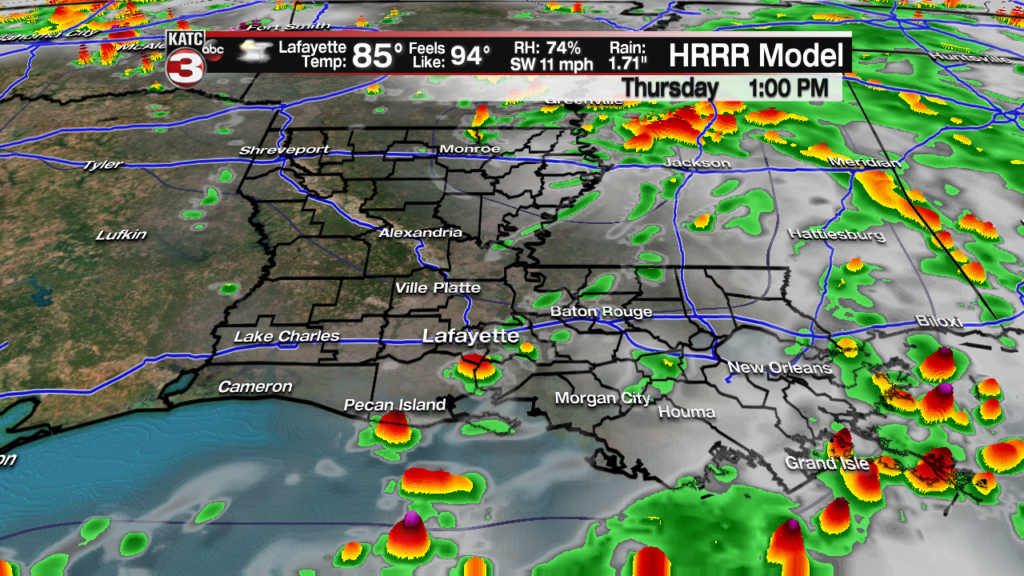 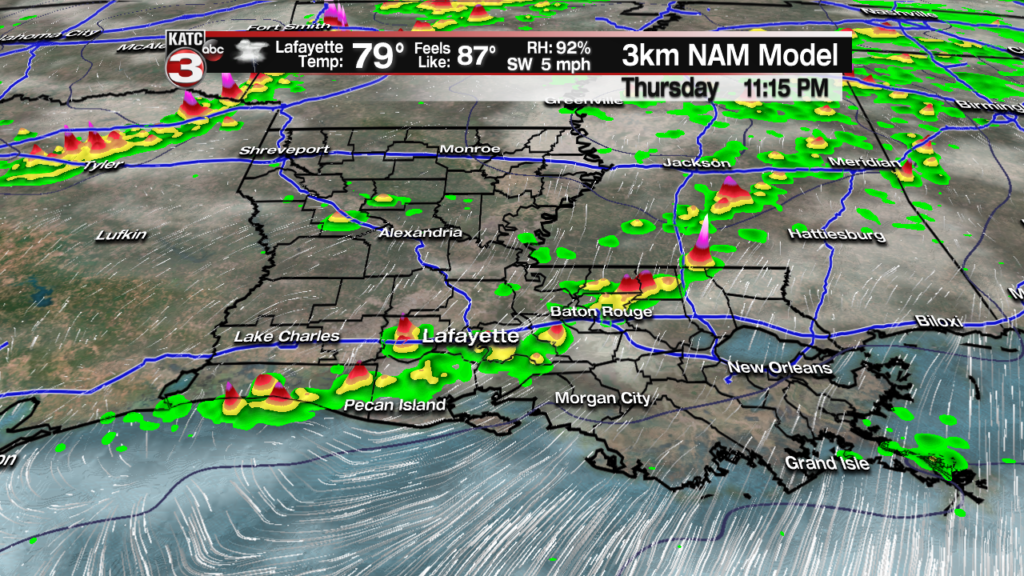 Drier conditions with hotter temperatures should return to Acadiana for the weekend with only a slight chance of a late afternoon showers or thunderstorm expected.

And the better news, is that a weak front early next week should bring more pleasant temperatures and humidity to the area for mid-late next week.

See the 10 Forecast for the latest.

Meanwhile along the coast, southerly winds will increase the tides from their current state: near 1 foot above normal, to near 2-2.5 feet above normal predicted astronomical levels overnight through high tide times Thursday morning. 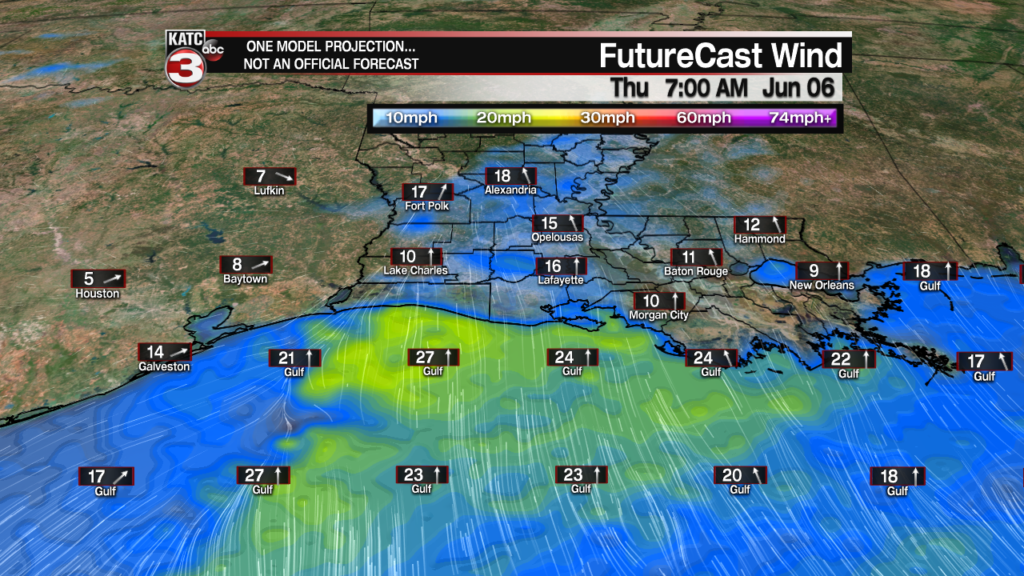 A Coastal Flood Advisory remains in effect here, with some high water likely in the usual spots from Intracoastal City to Cypremort Point. 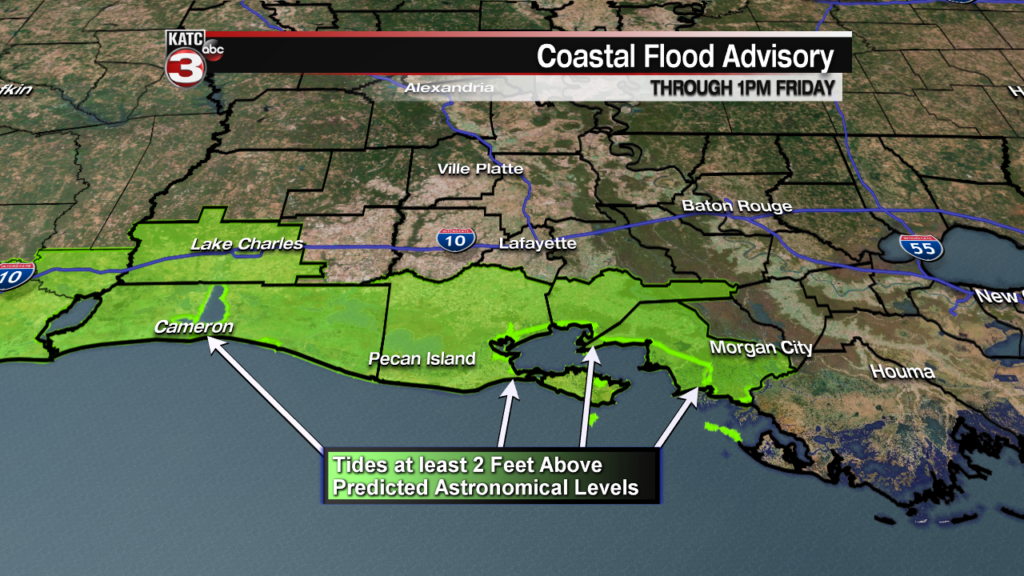 Latest tide levels for the Fresh Water Canal Outlet can be found here.