High pressure is still the dominant feature over the southeastern United States. The heat wave that has held for the past week will continue to stay strong, at least until the mid week. Expect more sunshine, with a few clouds mixing in later this afternoon. Temperatures will soar into the mid 90s with heat index values near 100. Western sections will have a slight chance for showers and thunderstorms, particularly closer to the Texas state line. Rain chances for the far west will run about 40%, while areas closer to the Atchafalaya Basin will run closer to 20%. The same forecast will repeat Tuesday. 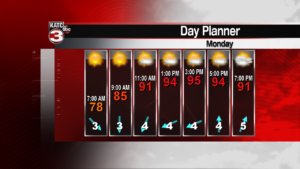 We’re monitoring a disturbance over the Bay of Campeche. This will be lifting northward along the western Gulf coast during the early part of the week. Previously scheduled recon flights have been cancelled as the disturbance remains very disorganized. Another flight is scheduled for this afternoon, if needed. Rain chances will be increasing as the moisture lifts northward. 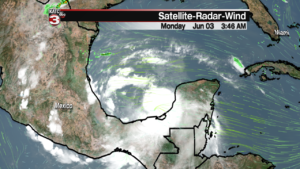 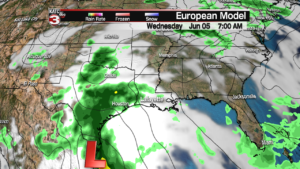 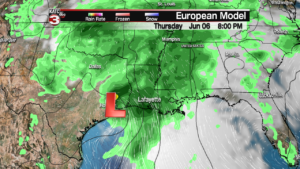 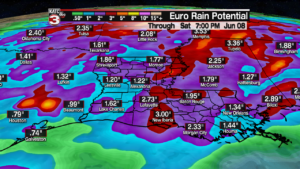 Regardless of development, decent rain totals can be expected Wednesday through Friday. Most models are putting down 3-4 inches of rain before the week ends. As of now, the lower parts of the Mississippi Valley can handle the rainfall with little impact on current flooding. Areas farther inland, such as Oklahoma and Arkansas, can’t take much more. This is not good news for them. These disorganized tropical type systems can either be normal rainmakers, or they can be drenching, such as the “unnamed” event in 2016 and Tropical Storm Allison in 2001. Both of these systems dropped feet of rainfall rather than inches. The Morganza Spillway is still scheduled to be opened Thursday to relieve pressure on the Old River Structure as floodwaters from the Arkansas River and the Upper Mississippi move in.

By the weekend, this disturbance should be moving northeast of the region. Sunshine is expected to return with summer like temperatures again.