Services will be June 1 for Nolton “Horse” Semien, who died Wednesday.

The funeral will be at 11 a.m. on June 1 at Holy Family Catholic Church in Lawtell. Interment will follow in the church cemetery. 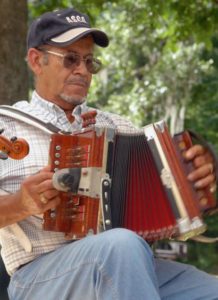 Semien was “a true Louisiana treasure and the last of his kind,” according to the liner notes of his 2012 album, “Oh Lucille.”

“Young Nolton would sit at his father’s feet watching him play the accordion. When Papa Semien took a rest, he would give the squeezebox a try. From the 50s to the 80s Nolton performed at zydeco trail rides and nearly every church hall and dance club in Louisiana,” the notes state.

He’s also credited with inspiring many Zydeco and Creole musicians.

Ford and Joseph Funeral Home is in charge of the arrangements.