Heat gradually increases into the weekend

After a windy, warm and humid day across Acadiana Tuesday, expect a gradual decrease in wind and increase in temperatures later this week and into the weekend.

In the near term, it will be breezy, warm and humid Tuesday evening, with a very slight chance of a quick, passing shower, primarily between 8-11 pm. 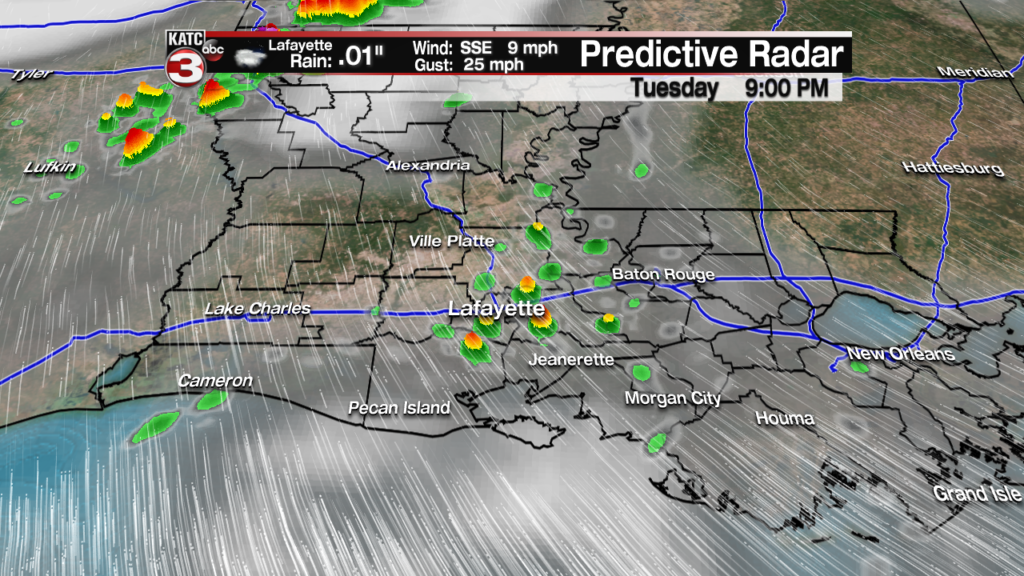 It will be another balmy night thereafter, with temperatures holding mostly in the upper 70s under partly to mostly cloudy skies. 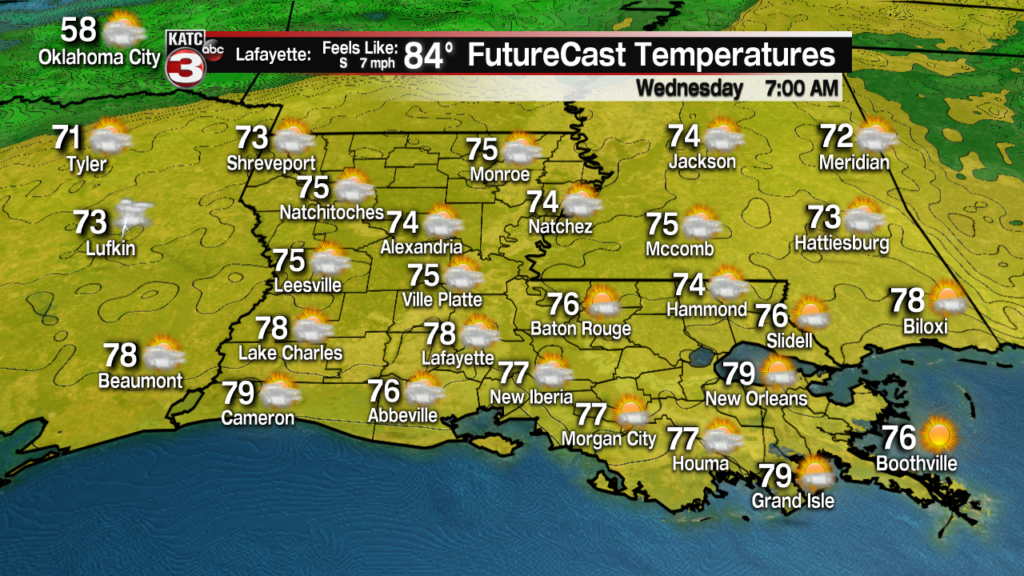 Breezy southeasterly winds will continue into this evening but should diminish toward daybreak, only to get breezy again (but not as strong as Tuesday) for Wednesday afternoon.

After a round of morning clouds Wednesday, look for another sun and cloud mix for the afternoon accompanied by breezy southeasterly winds near 12-18 mph, and temperatures topping out near 90 briefly for a high. 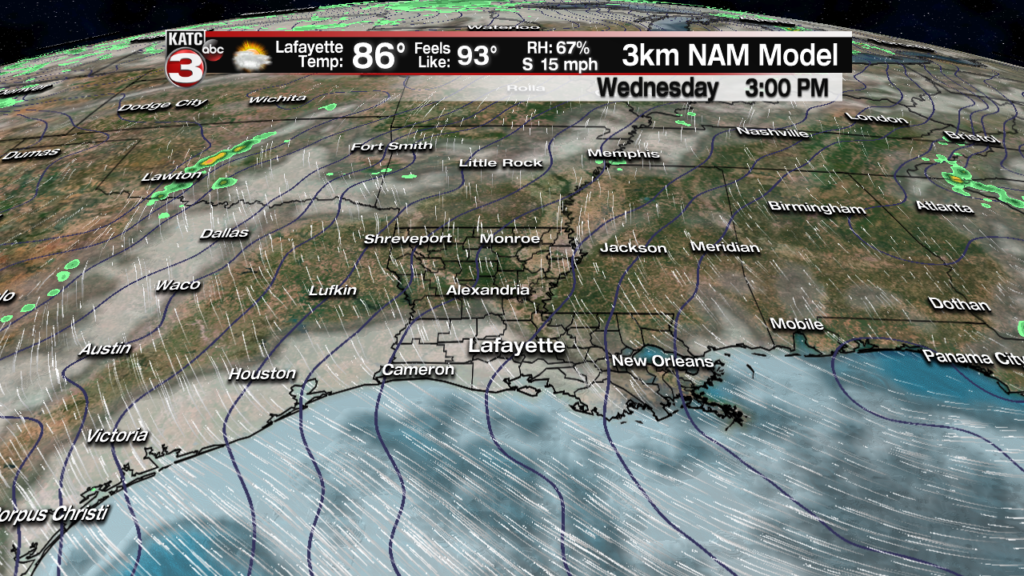 Winds Wednesday will be closer to 12-18 mph sustained with a few gusts reaching the 20-25 mph range. 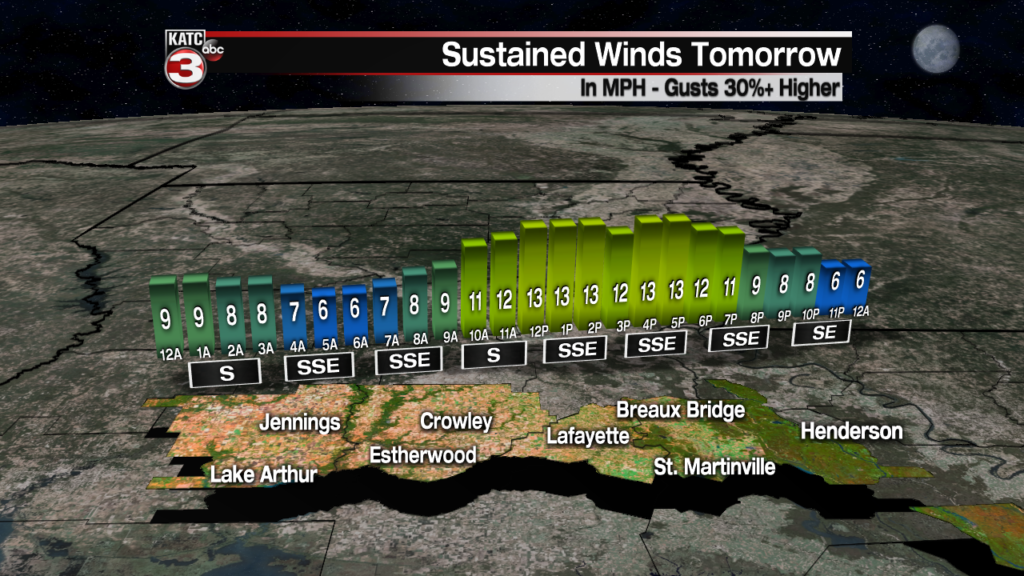 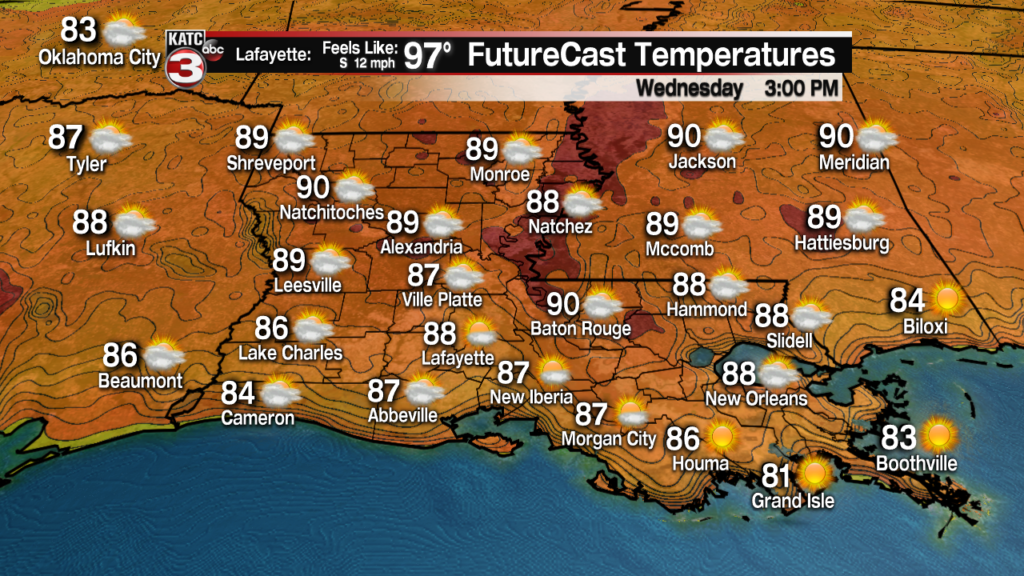 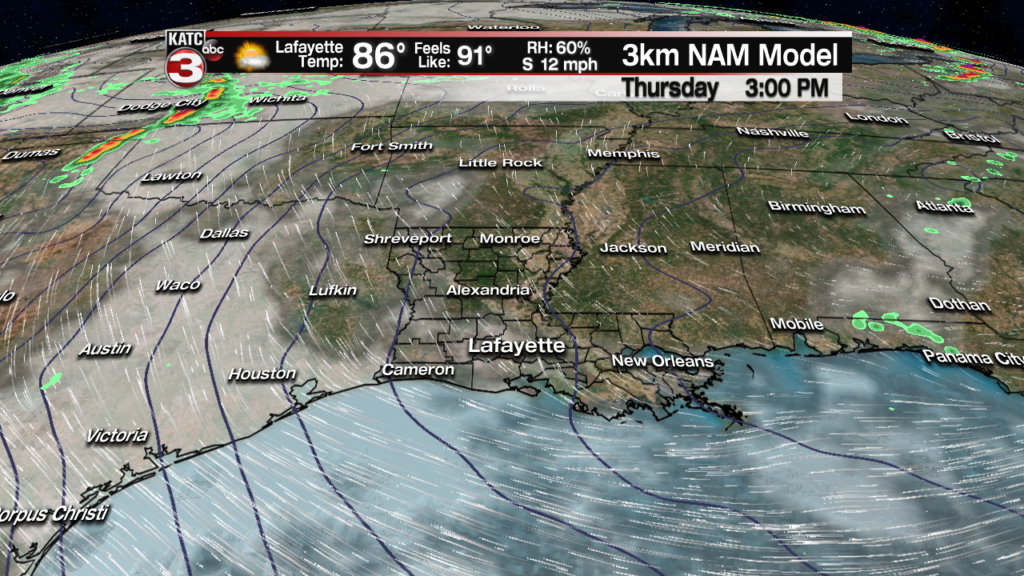 Highs Thursday will again top out near 90 with heat indices pushing the upper 90s. 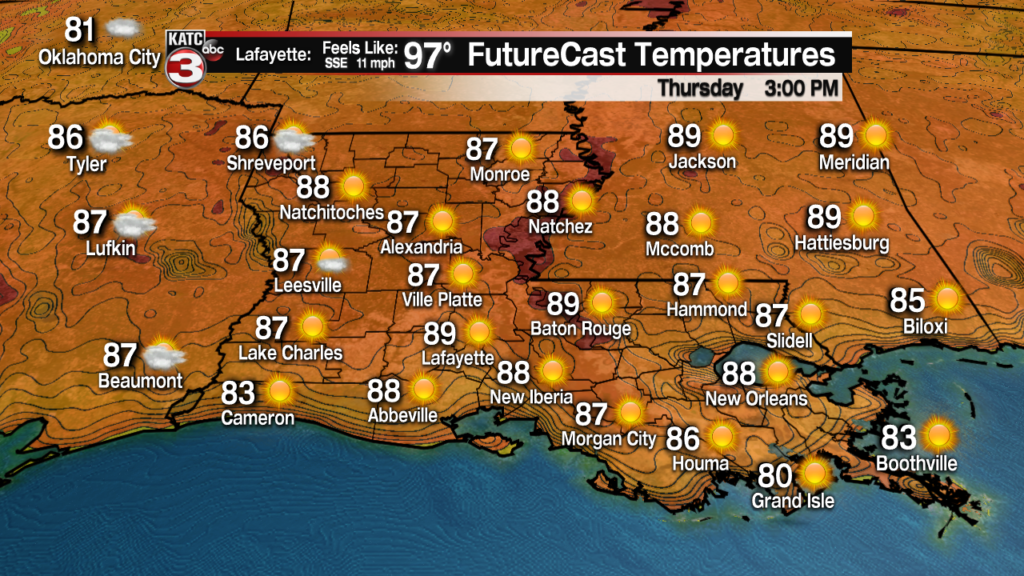 As the weekend approaches, the aforementioned ridge of high pressure will sit right on top of Louisiana allowing for sunny and likely hotter conditions pushing the mercury into the low-mid 90s into early next week. 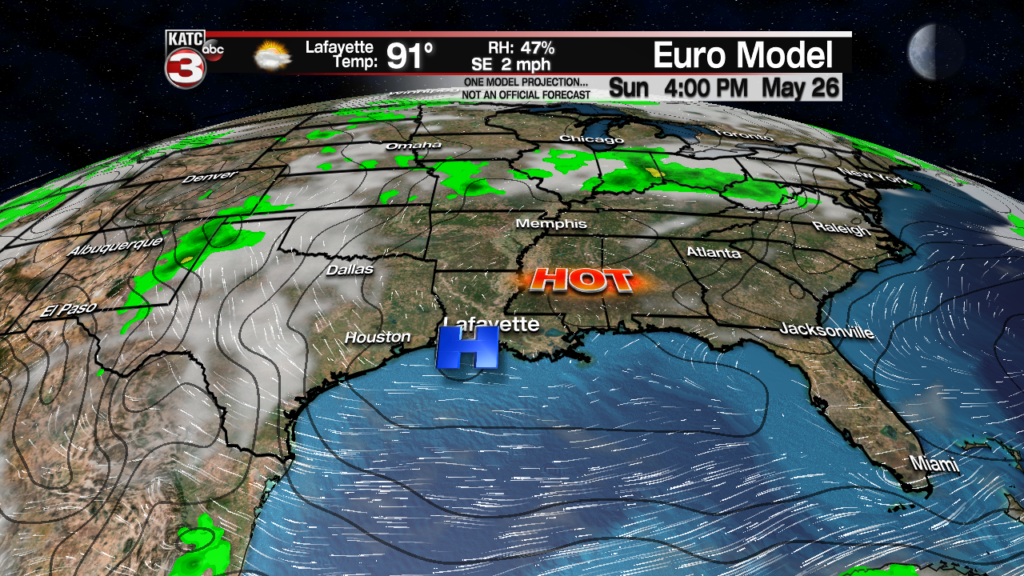 At least it looks like our dew points will decrease when it truly gets hot, but nonetheless heat indices will likely be flirting with the 100 degree mark through the entire holiday weekend. 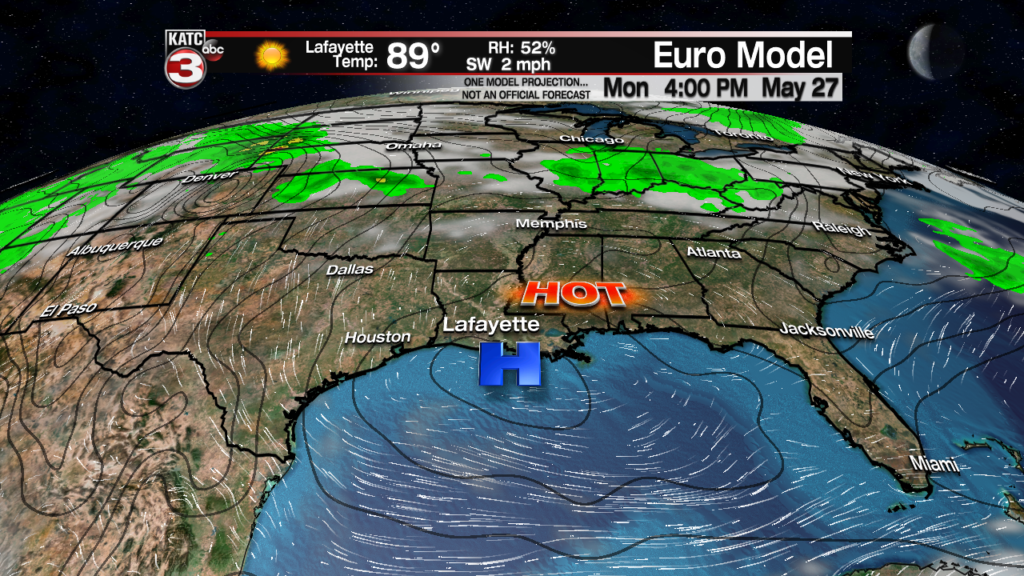 Rain chances are anticipated to remain quite low until there’s a change in the pattern somewhere in the 9-11 day period. See the KATC 10 Day Forecast for the latest.

As for the strong southeasterly winds inland and buffeting the coast today, a Coastal Flood Warning remains in effect for the entire Acadiana Coast through Wednesday afternoon as tides will remain 1-2 feet above normal. 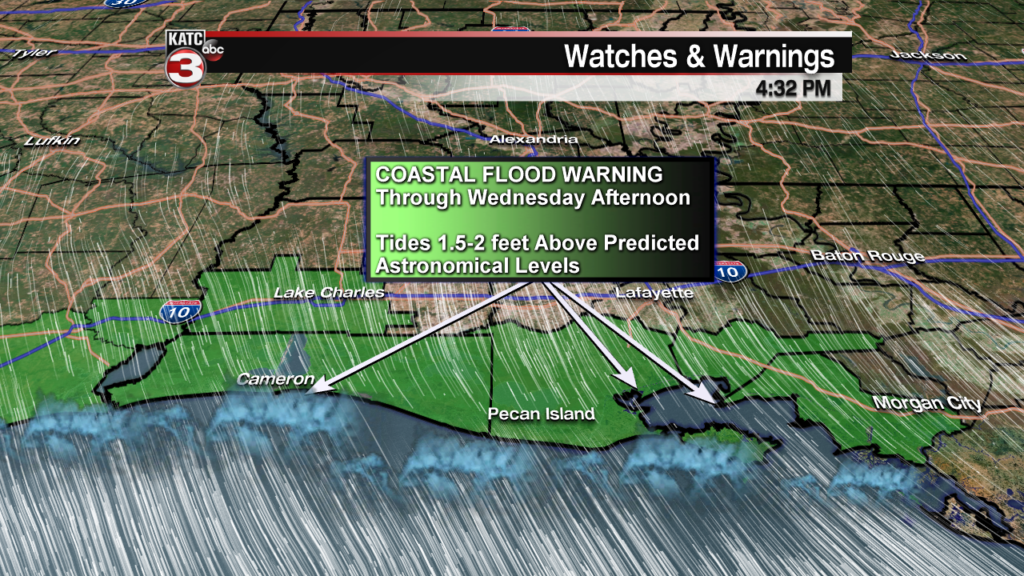 Minor flooding was reported at Cypremort Point around noon Tuesday as tides reach 2.5 feet above predicted levels with water roughly 6″ lower later during the mid-afternoon afternoon. 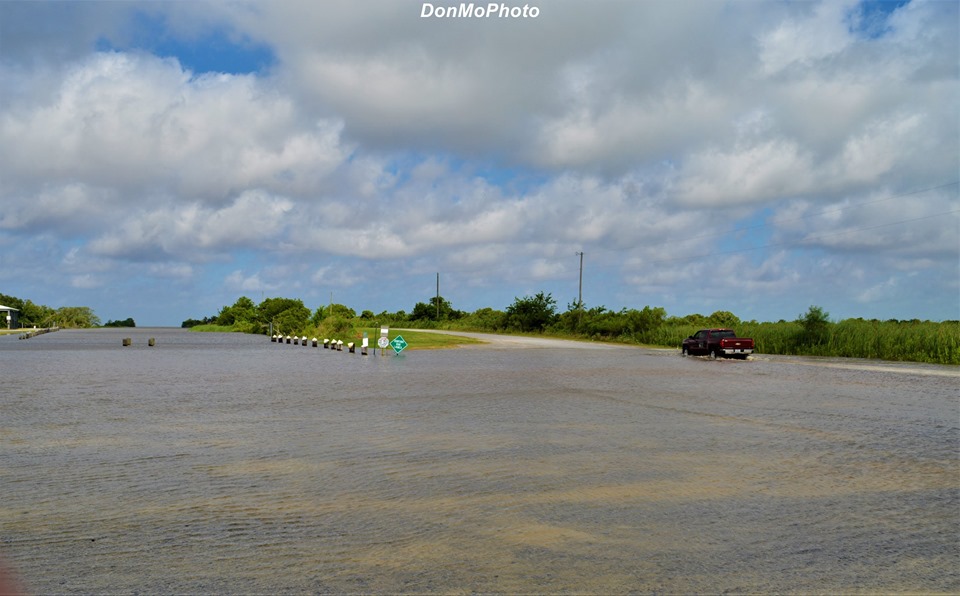 Boat Landing at Cypremort Point courtesy of Don Meaux Sr.The water will likely peak again near 2 feet above normal Wednesday in concert with the noon high tide at the Point.

Breezy southeasterly winds (not a s strong as Tuesday though) will likely to continue for several more days keeping elevated tides along the coast most of this week with improvement anticipated for the weekend.