High pressure continues to move eastward allowing more southerly winds to blow in off the Gulf of Mexico. We’ll start with mostly sunny skies for the early part of the day with a few scattered clouds developing later this afternoon. Temperatures will climb into the upper 70s to near 80 degrees. A little more cloud cover can be expected overnight with mild temperatures. Lows will drop to near 60 degrees. Tuesday, expect a mix of sun and clouds with highs near 80 degrees. 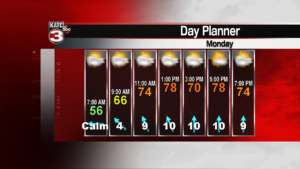 As we head toward the mid week, there will be a weak system moving through. This could have a minor impact on some opening acts of Festival International Wednesday. Both the GFS and the Euro Models are indicating mostly cloudy skies for the duration of the day Wednesday, with a few widely scattered showers developing Wednesday night. The timing still brings most of the rain and storminess during the overnight period into Thursday, with the best chances of rain Thursday morning through midday. Lingering rains may still be in place Thursday evening, but the chances for any lightning by Thursday evening should be moving east. Both models keep clouds for the early part of Friday, with the GFS holding on to a few sprinkles even into Friday night. Over the weekend, we can expect sunny skies and perfect festival weather! 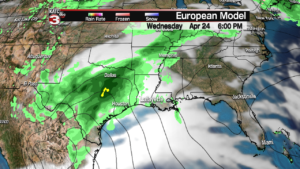 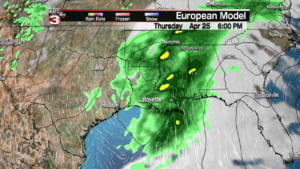 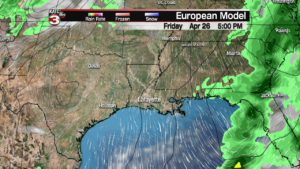