Showers and thunderstorms will become likely for Acadiana overnight through Wednesday morning with a marginal risk of a few severe storms possible.

In the near term, foggy and misty conditions can be expected through the early evening hours, before a warm front moves northward through the area and freshening the winds from the south. 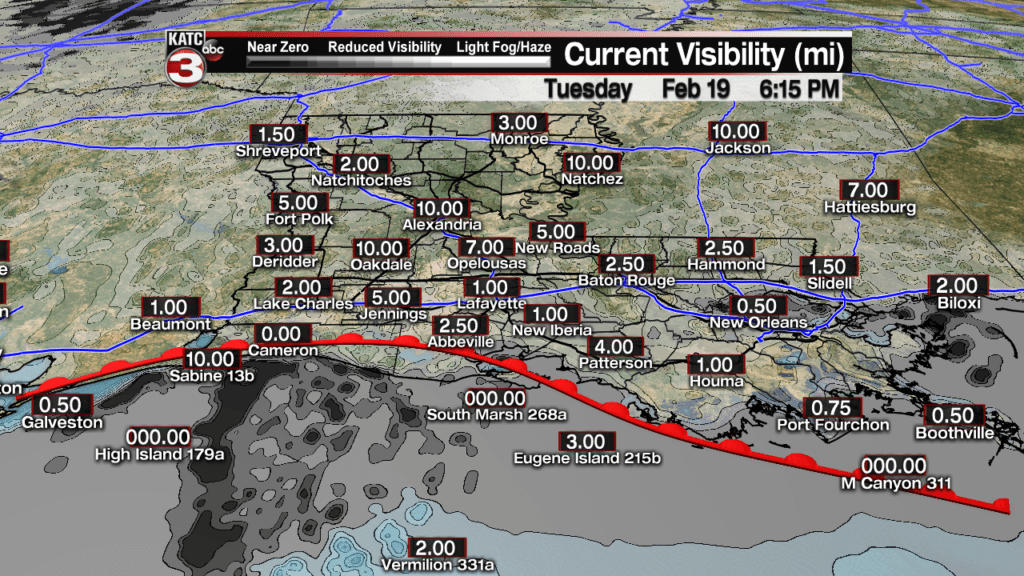 Thereafter, thunderstorm activity will be on the upswing prior to midnight.

The Storm Prediction Center (SPC) has most of Acadiana hatched in for a “marginal” (5%) risk of a few severe storms with the possibility of one or two super cells storm forming during the overnight hours. 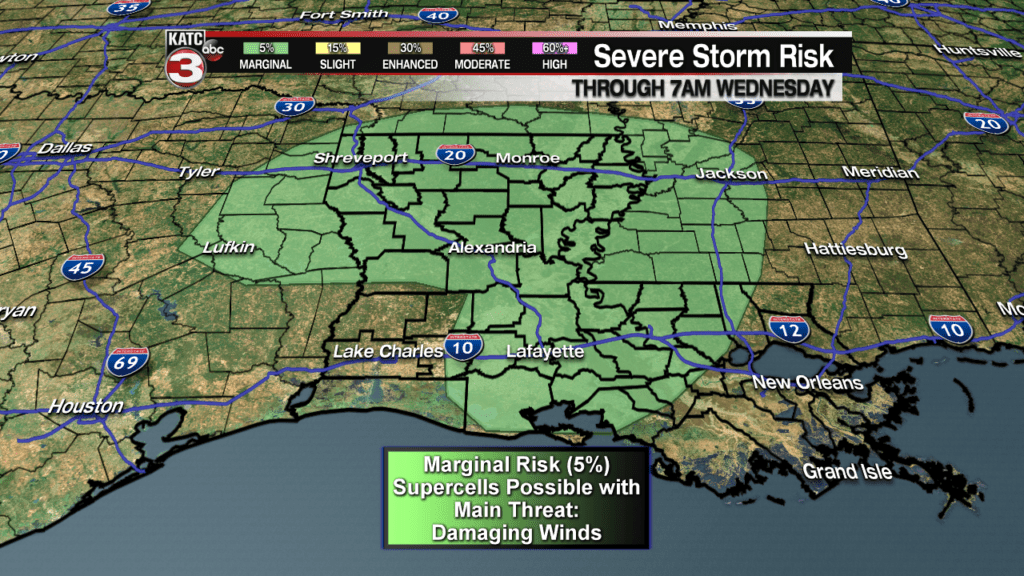 The primary risk and strongest storms would be for damaging winds, mainly well after midnight and through the first few hours of Wednesday as a frontal system moves eastward. 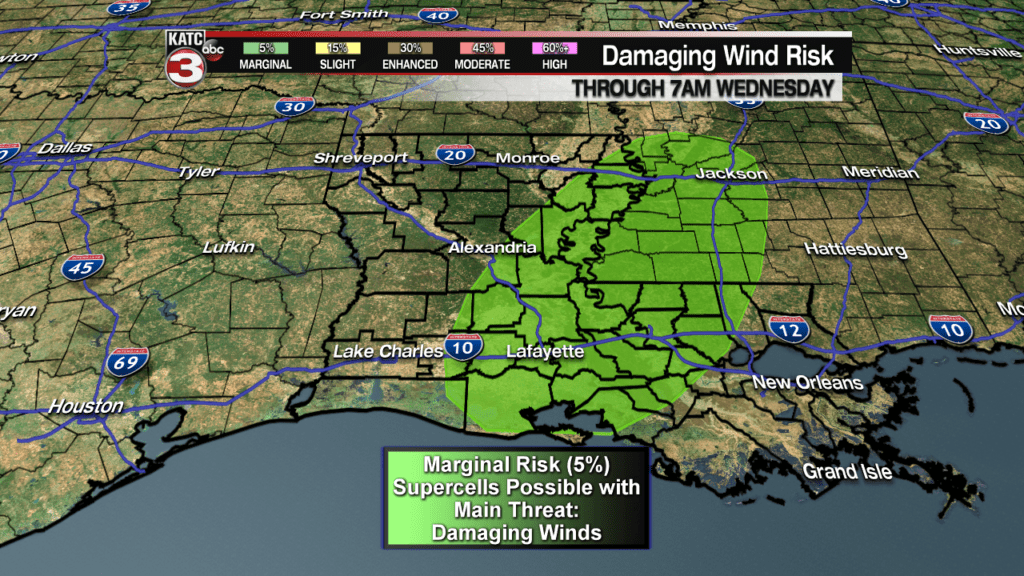 Meanwhile, the highest risk for hail will be confined to the northern part of the state. 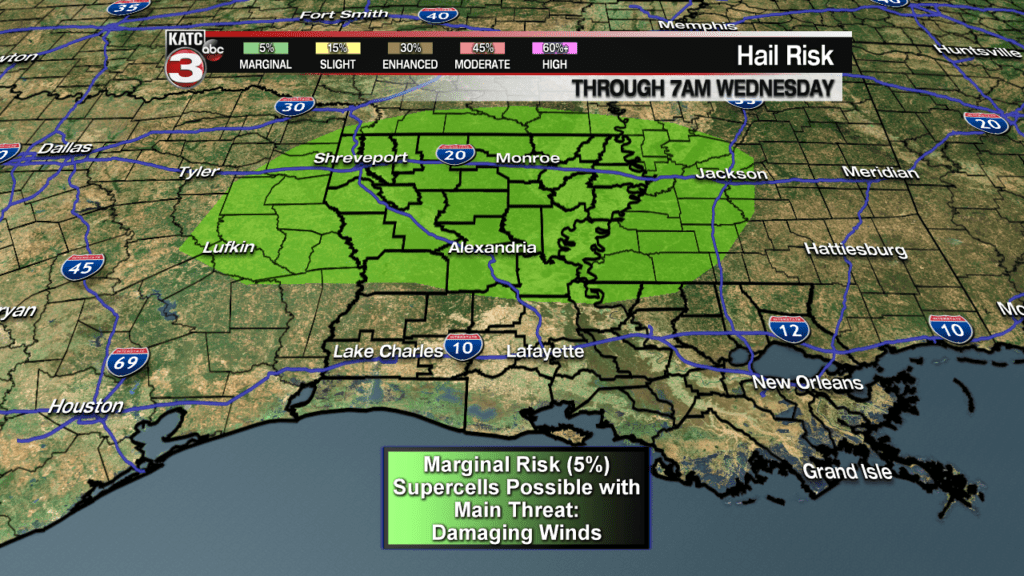 And although any tornado risk should be very low…near 2%, if dew points can climb along with the temperatures into the lower 70s overnight (right now the thinking will be that it could be close), an isolated tornado or two cannot be ruled out…and even during the evening hours with fairly impressive upper level wind profiles. 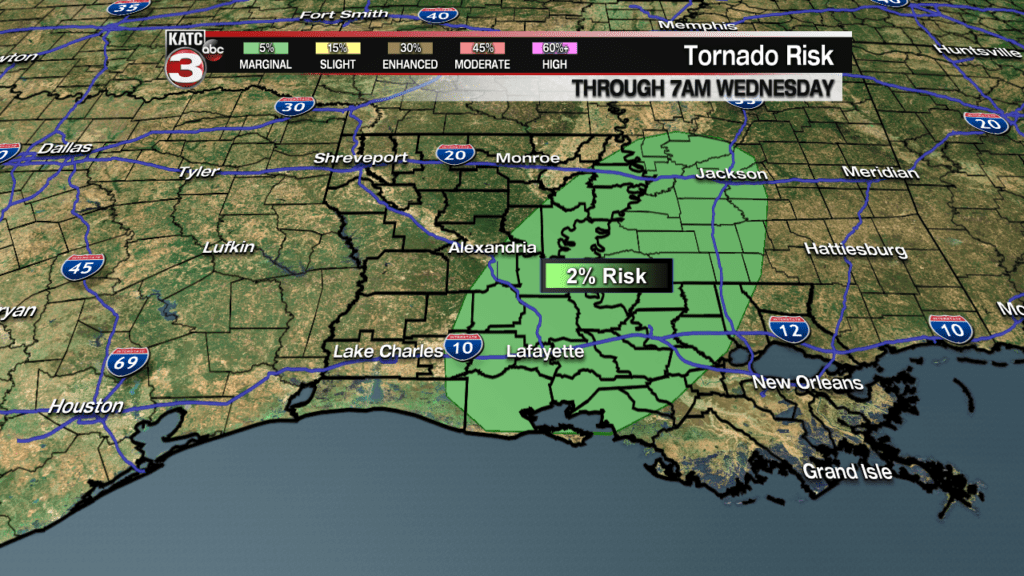 Rainfall should not be an issue, with most areas receiving somewhere between one third to two thirds of an inch through Wednesday, but a few isolated spots may catch closer to an inch…overall more is expected than the latest RPM Forecast below. 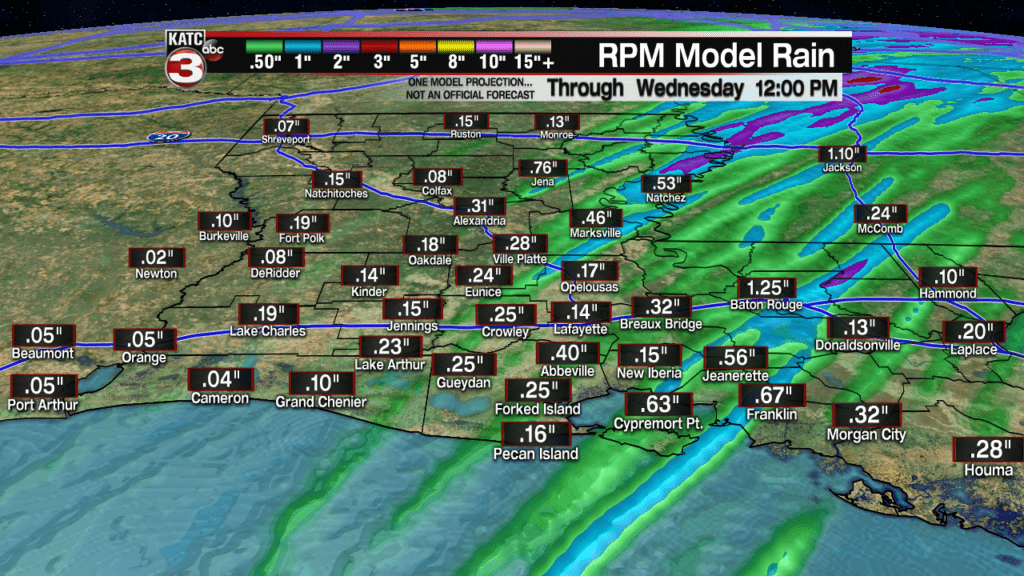 Rain chances will decrease significantly Wednesday afternoon as a cool front pushes to the east allowing for cloudy skies and temperatures to cool into the lower 60s. 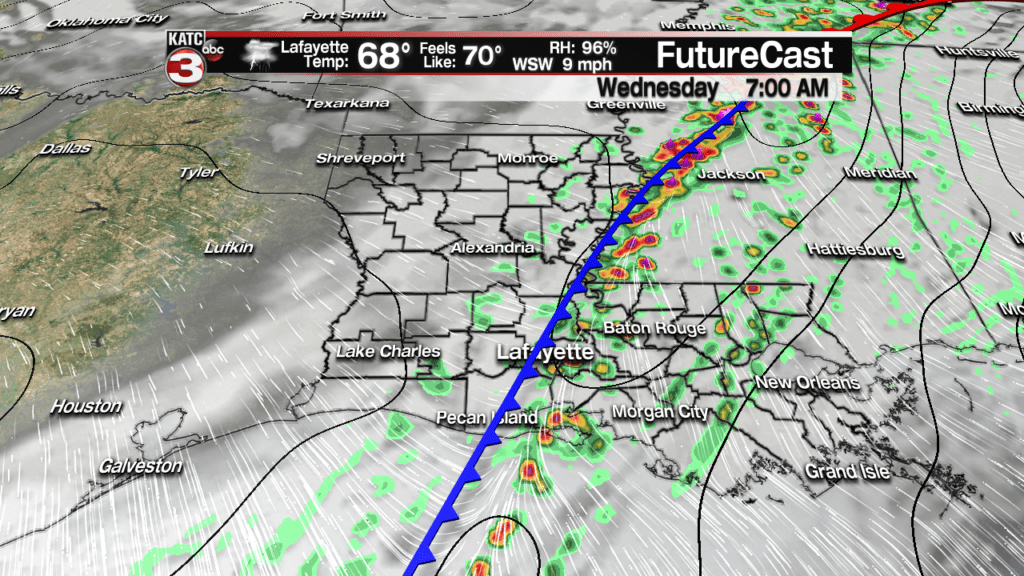 Rain chances will be near 90% early Wednesday, decreasing to near 30-40% by midday and 30% or less for the afternoon. 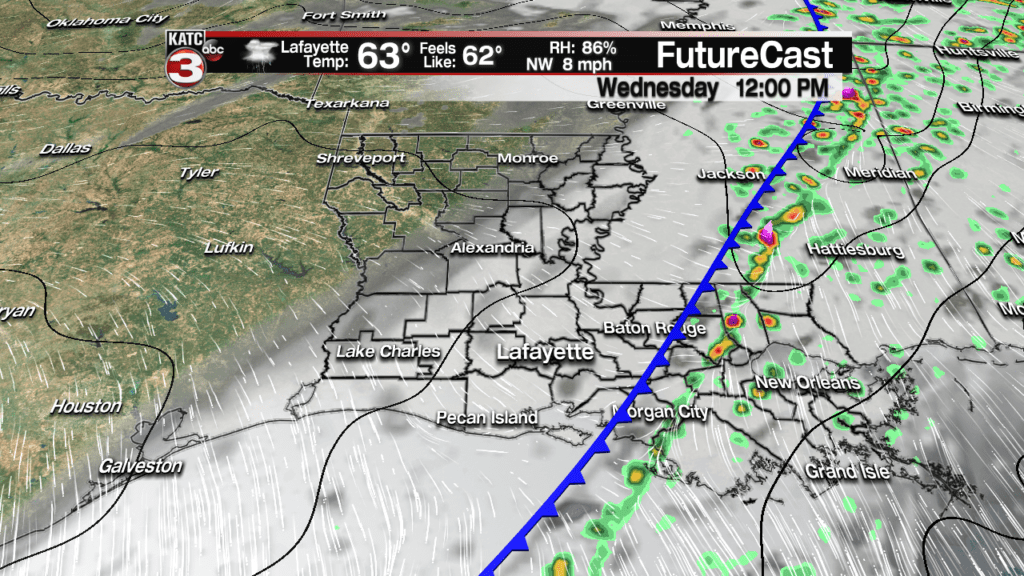 The same frontal boundary will become nearly stationary and begin to back up to the north and west overnight Wednesday into Thursday. 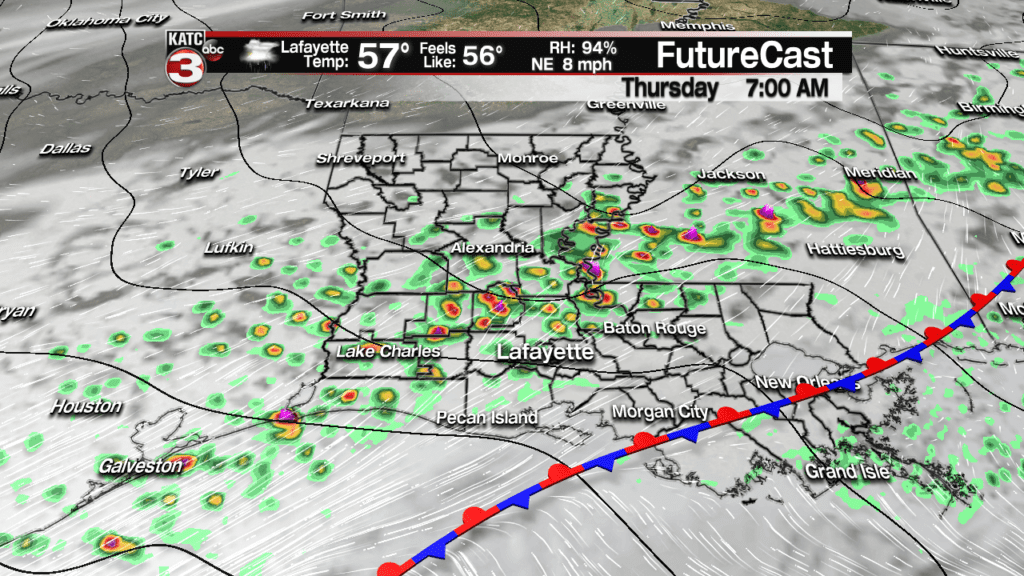 At the same time another vigorous upper disturbance will ignite showers and storms by Thursday morning with an additional 1-2″ of rain possible in isolated spots…but overall, the flood risk may still remain low for the area. 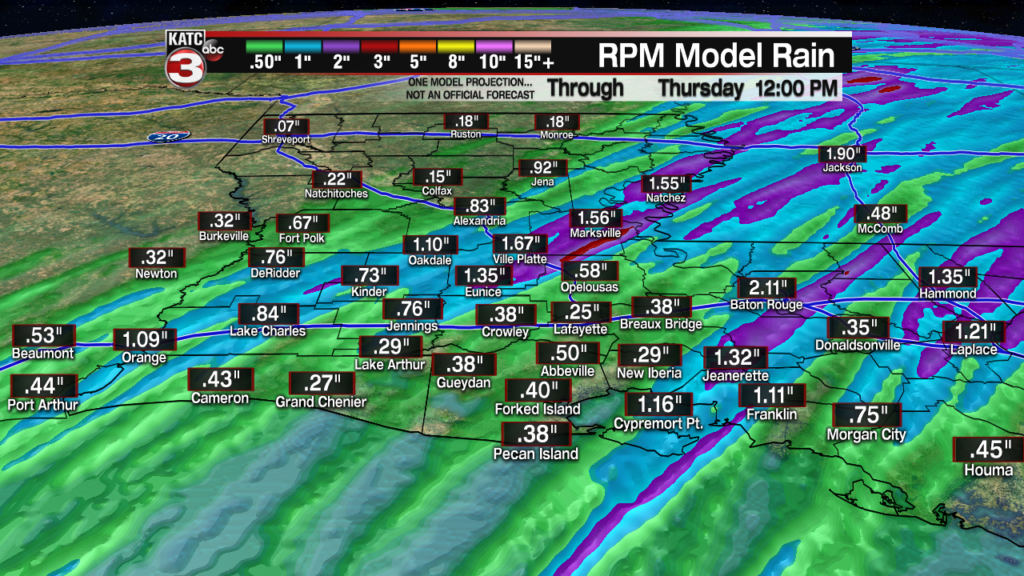 No severe weather is expected Thursday, nor as mentioned, should there be any flood issues, but conditions may change, so stay with KATC for the latest.

Temperatures will warm back into the lower 70s Thursday afternoon (but much cooler yet to the northwest) with morning storminess leading to showers that will be more scattered in nature for the afternoon.

Rain chances Thursday will be near 80% in the morning and near 40-50% for the afternoon.

Moving into Friday, few showers and storms are expected, but they may concentrate closer to the frontal boundary that will be well to Acadiana’s north. And there could be some breaks in the clouds by midday into the afternoon, which could ultimately lead to the warmest day of the calendar year to date.. 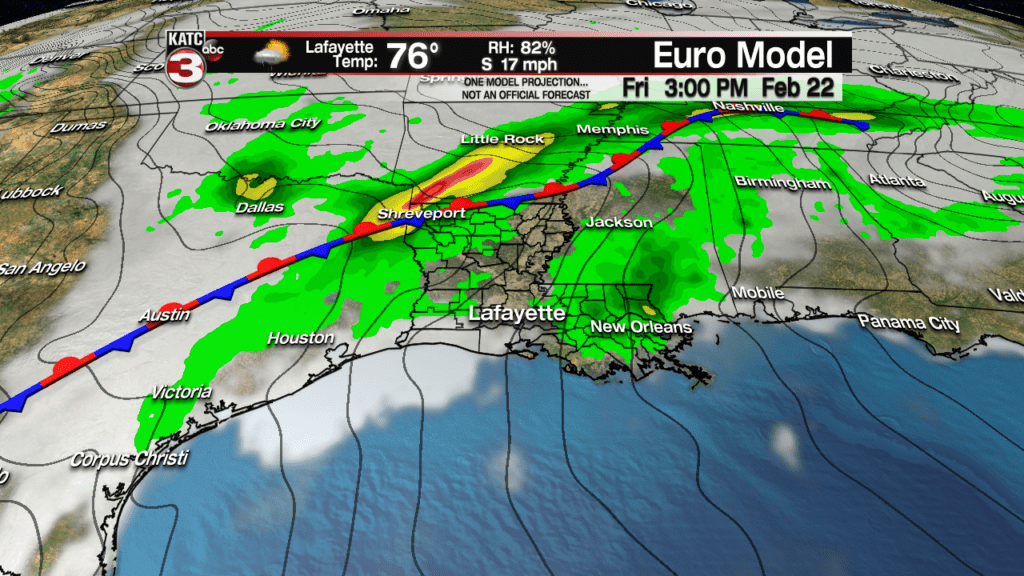 And with a strong southerly flow in place of our next frontal boundary, temperatures Friday afternoon could reach near 80 degrees in a few spots.

It will become breezy and stay warm Saturday with the chance of showers and storms once again increasing ahead of a cool front that is currently forecast to arrive Saturday evening.

The early Mardi Gras parades Saturday should be in good shape, but the Rio Parade could be impacted by storms…stay tuned as timing may change. 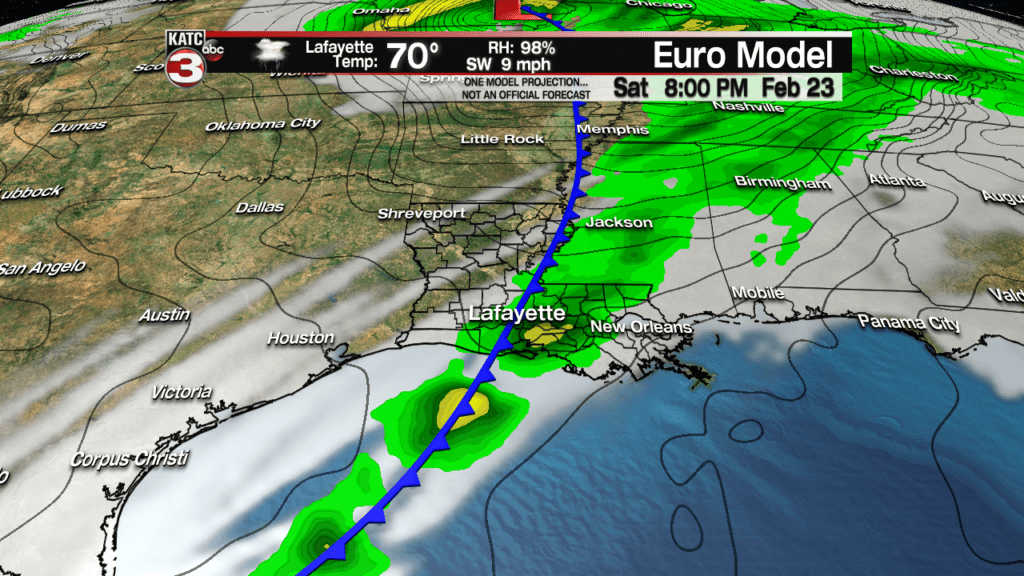 Thereafter, we get a break from the rains with breezy and seasonably cool conditions expected Sunday under partly cloudy skies…enjoy! 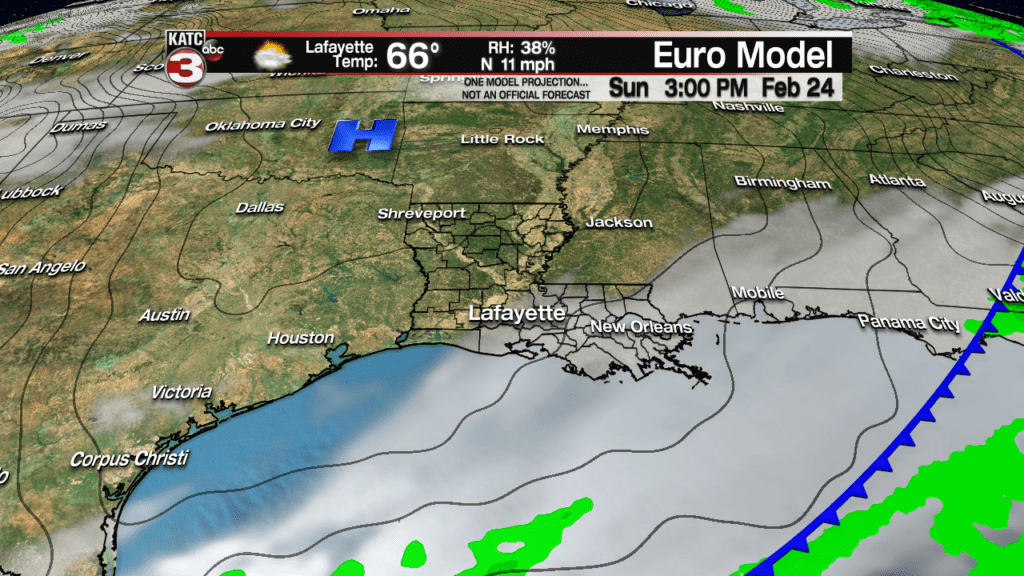 But the dry period will be brief with another good chance of soaking rains, and perhaps a few embedded storms returning Monday into early Tuesday. 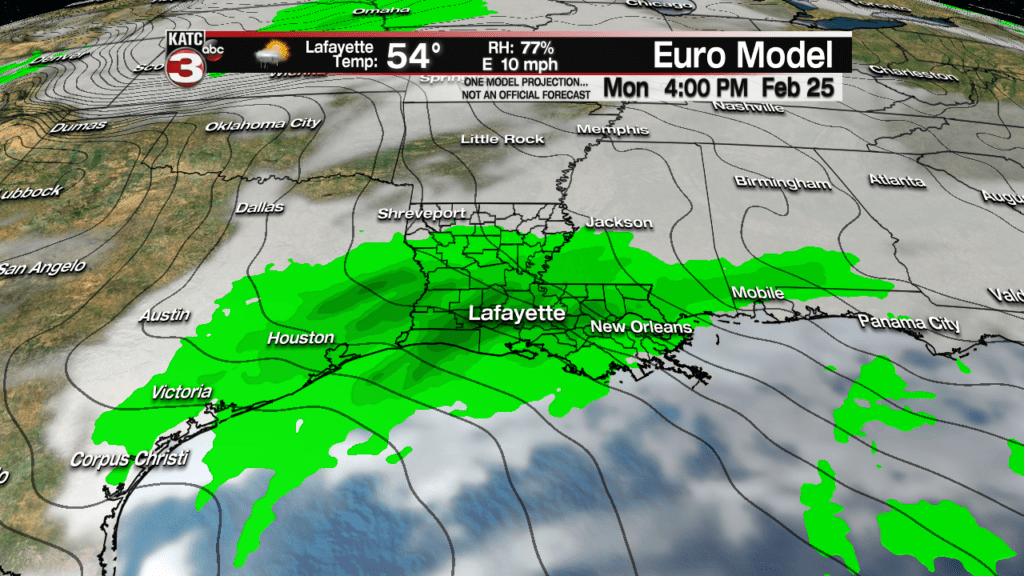 Accumulative rain totals (per the Euro model) through next Tuesday will be rather high, in the 3-5″ range or more over a week’s period, but with any luck, hopefully there will not be any flooding issues. 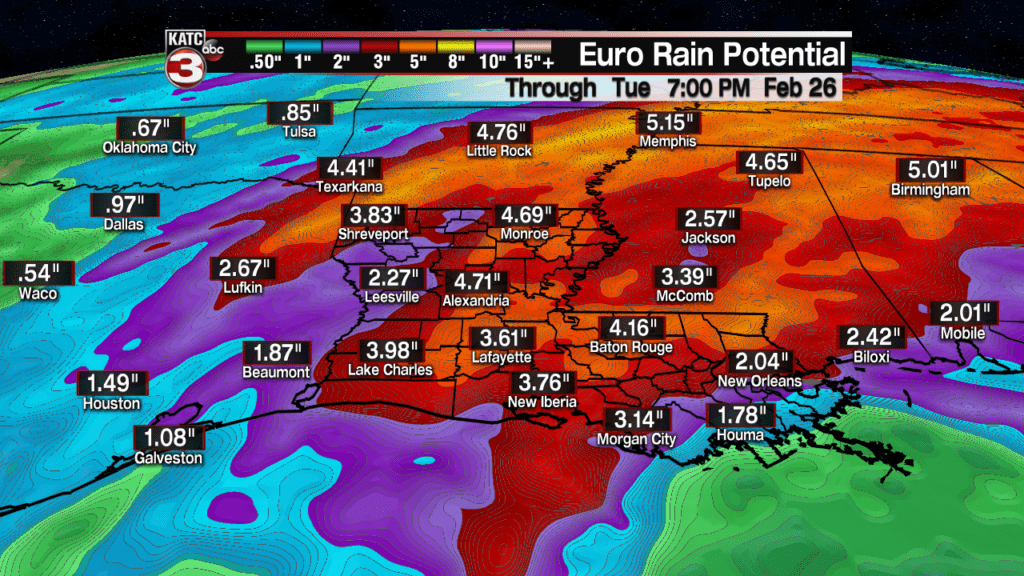 But with heavier rains (and snows) farther north feeding into the Mississippi River Basin, expect a fair bit of water to be coming down the Mississippi River into March, with bigger bumps possible of water into April when the snows to the farther to the north begin to melt…which will also likely impact the Atchafalaya River…something to watch through this spring.