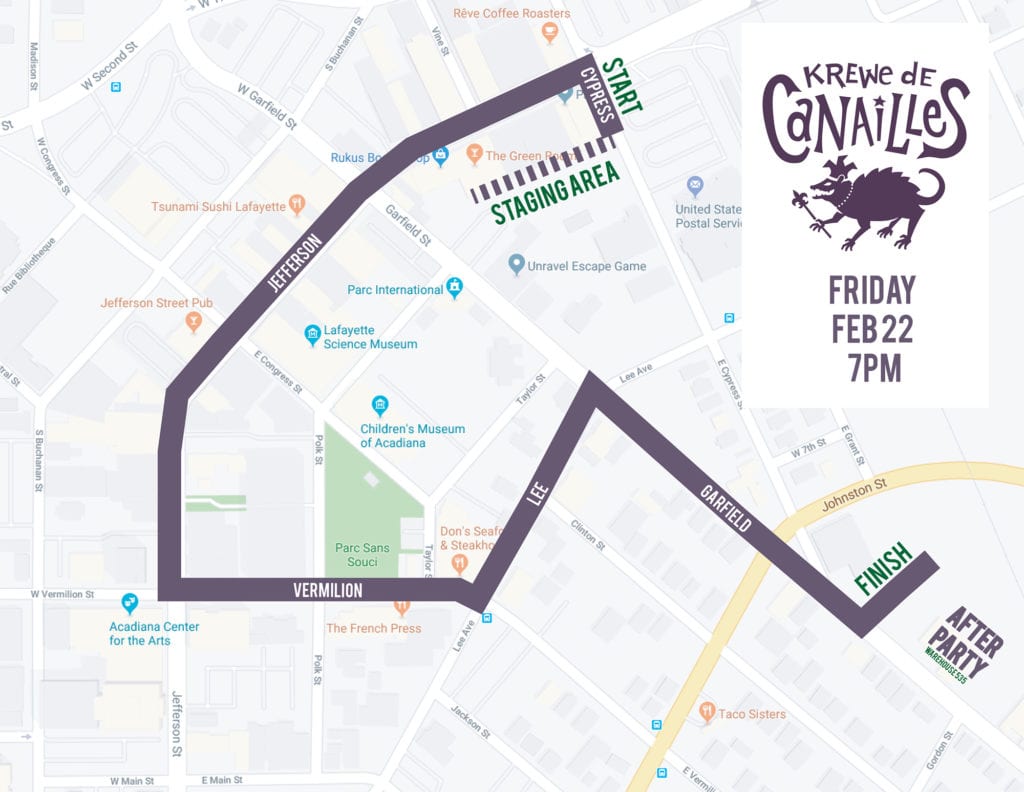 LAFAYETTE, La. – Downtown Lafayette’s newest parade krewe returns on Friday, February 22 as the first Mardi Gras parade of the season to celebrate the rich history of the state of Louisiana.

With the 2019 theme of “Louisiana Folklore,” the krewe will pay tongue-in-cheek tribute to hundreds of years rich folk history of Cajun, Creole, Native American, and so many other cultures that make Louisiana an intriguing and unpredictable state. Spectators can expect handmade costumes and throws referencing beloved Louisiana folklore such as the Rougarou, the Cauchemar and so much more.

After a successful inaugural parade in 2018, downtown Lafayette’s only walking parade brings with a new and improved route and designated areas for performance breaks (TBD). The new route will begin at the corner of Jefferson and Cypress Streets and continue down Jefferson Street before turning left onto Vermilion Street near the Acadiana Center for the Arts. With a left turn onto Lee Street and an eventual right turn on Garfield Street, the parade will end with an after-party at Warehouse 535 (entertainment TBA). The new route will incorporate Parc Sans Souci on Vermilion Street and give spectators ample space to congregate before, during and after the parade.

With the krewe’s core values of ingenuity, sustainability, and inclusivity, spectators can expect to see a wide array of creative expression. The krewe hopes to create an atmosphere where art and Mardi Gras mischief intersect with unique costumes, signature throws, and people-powered floats. A lack of barricades on most of the route means spectators will be able to safely interact and dance with krewe members in a much more personal manner than traditionally possible in Lafayette parades.

The family-friendly parade is free to attend in downtown Lafayette beginning at 7 PM on Friday, February 22. Spectators of all ages are welcome and are encouraged to bring flashlights, costumes, and noisemakers to the parade route.