After a gray day across the region, the clearing line is finally moving across Acadiana tonight. Those clouds held temperatures in the low to mid 50s most of the day, while areas closer to the Texas state line that saw some sunshine approached 60 degrees. The clear skies and light winds overnight tonight should allow temperatures to drop into the lower 40s, which is normal for the middle part of December. 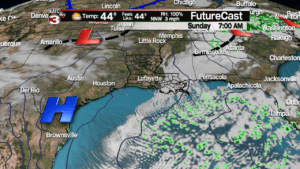 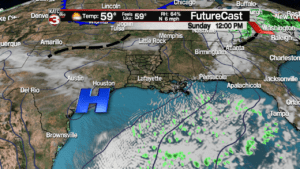 We’ll salvage the weekend weather Sunday with quite a bit more sunshine. There will be some high, thin cloudiness, but it will definitely be a brighter day than Saturday. With the extra sunshine, temperatures should reach the lower to middle 60s, again normal for mid December. Quiet weather is expected to linger for the early part of the week with a slight warm up Monday and Tuesday. Both days should see partly to mostly sunny skies with highs in the mid 60s and lows in the mid 40s. 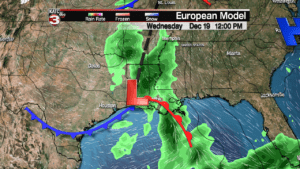 Looking toward the middle part of the week, skies will again become cloudy by late Tuesday with rain developing by early Wednesday morning. A little too early to tell, but it doesn’t appear that this next system will be a big rain maker. Models now are bringing about a half inch of rain, with some higher totals north of the area. It looks like less than an inch for all areas. That system will swing through quickly allowing sunshine to end our week and linger into next weekend. Looking ahead to Christmas Eve and Christmas day the following week, the forecast as of now looks cloudy with a few showers and rather warm.