Investigators from the League City Police Department are seeking the public’s help in identifying the skeletal remains of a homicide victim from a 1991 “Calder Road” cold case. Detectives are hoping that recent scientific advancements in the field of forensic DNA analysis will generate leads and help identify the woman whose body was found on September 8, 1991, in League City, Galveston County, Texas.

League City investigators recently employed Parabon NanoLabs (Parabon), a DNA technology company in Virginia, to predict the physical appearance and ancestry of the unidentified woman using a new method of forensic DNA analysis called DNA phenotyping. Parabon’s Snapshot® DNA Phenotyping software analyzed the unidentified woman’s DNA and made predictions about her eye color, hair color, skin color, freckling, and face shape. The Snapshot analysis predicted the woman most likely had fair skin, hazel eyes, brown hair, no or few freckles, and has a likely family origin of Louisiana. These predictions were combined with a forensic facial reconstruction to create the composite, shown in the accompanying poster, depicting what the unidentified woman may have looked like at age 25. It is important to note that Snapshot composites are scientific approximations of appearance based on DNA and that environmental factors, such as hairstyle or scars, cannot be determined. 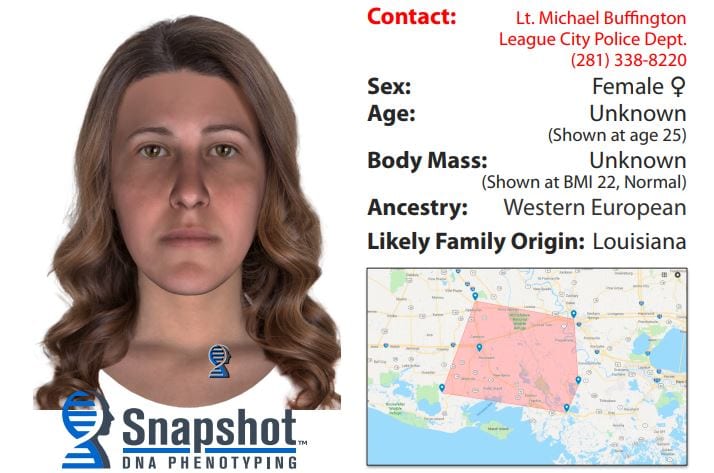 Coroners estimate the woman was 24-34 years old, 5’0″ to 5’3″ tall, and weighed 100-130 lbs, and that she had died six weeks to several months prior to being found. The woman had numerous old, healed injuries which were unrelated to her death. Her right first and second ribs showed healed fractures at the spine; the victim had a compression injury to her upper spine in three places; her lower spine showed signs of an old, poorly-healed compression injury. These injuries and her poor dental condition may have been the result of a singular injury event that occurred sometime prior to her homicide. As a result of her injuries, the victim may have had apparent problems with her head or spinal movements.

In addition to the Snapshot analysis, genetic genealogy methodologies were employed in an attempt to identify the subject. Based on this additional analysis, it is believed the woman’s relatives were of Acadian descent. The research further indicates locations where the victim’s extended family may have originated: Broussard, Lafayette Parish, New Iberia, Abbeville, Breaux Bridge, and St. Martin Parish areas are of special interest, followed by Vermillion Parish, St. Landry Parish, and Assumption Parish.

CALL TO ACTION: If you or someone you know originates from the specific geographic areas listed above please check with relatives and ask if any women matching the description provided in the Snapshot poster went missing around 1991 or inexplicably have not been in contact since that time. If you have any information that may help in this investigation, call Lieutenant Michael Buffington of the League City Police Department at (281) 338-8220.