Rain and storms will be likely for Acadiana Thursday with a couple of inches of rain possible and a marginal risk of a few severe thunderstorms. 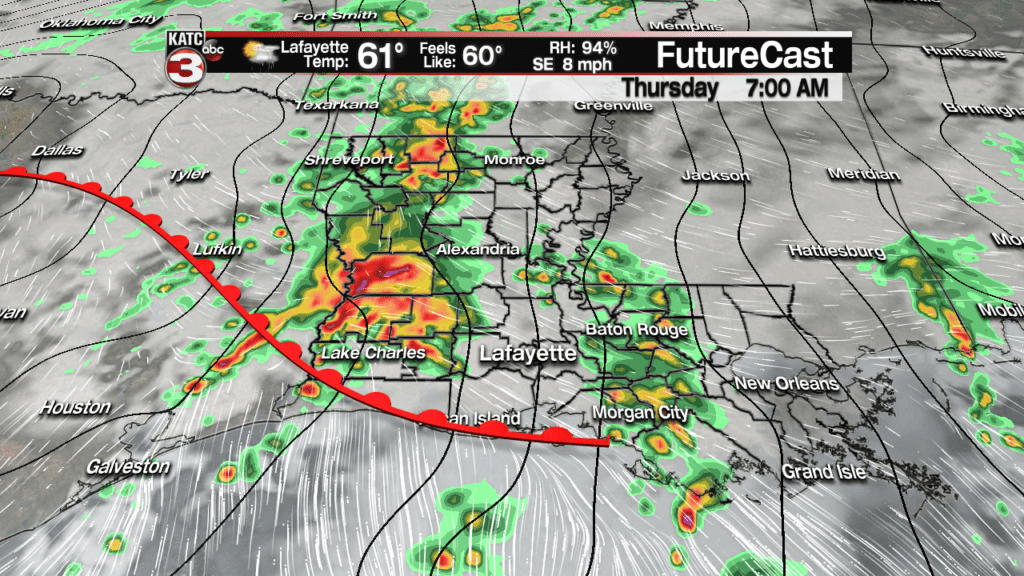 Additional shower and thunderstorm activity is anticipated into the early afternoon, with activity beginning to taper and move off to the east and northeast by late afternoon into the early evening. 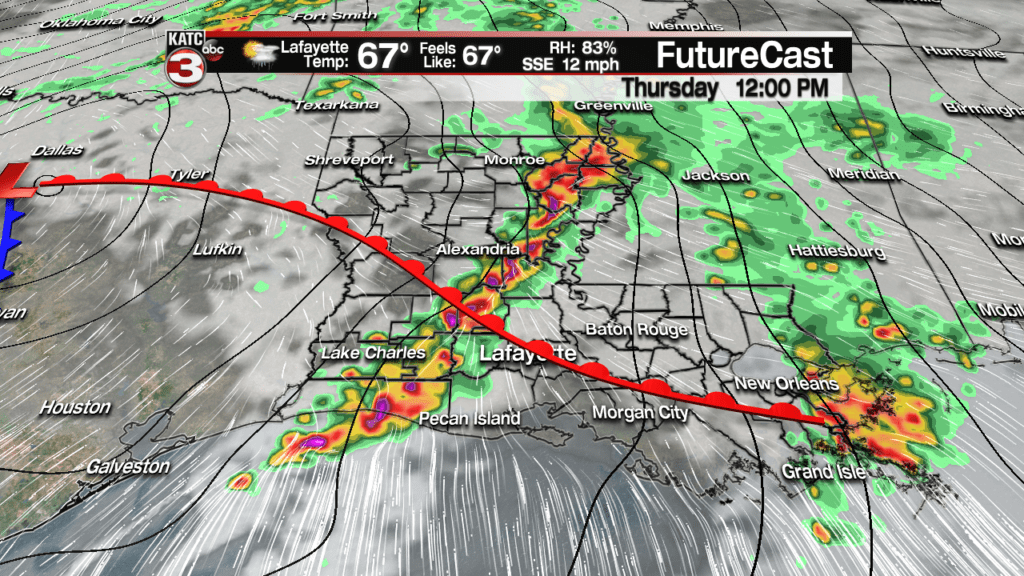 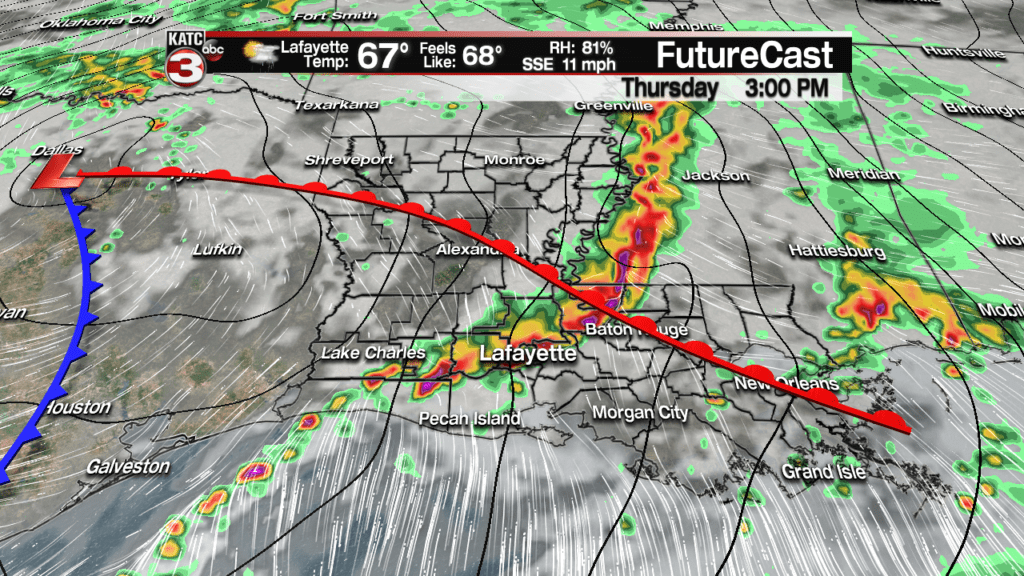 The Storm Prediction Center (SPC) continues to maintain all of Acadiana and Louisiana in a “marginal risk” area for a few severe storms, with the primary threats being hail and damaging winds, with a much slimmer chance of an isolated tornado. 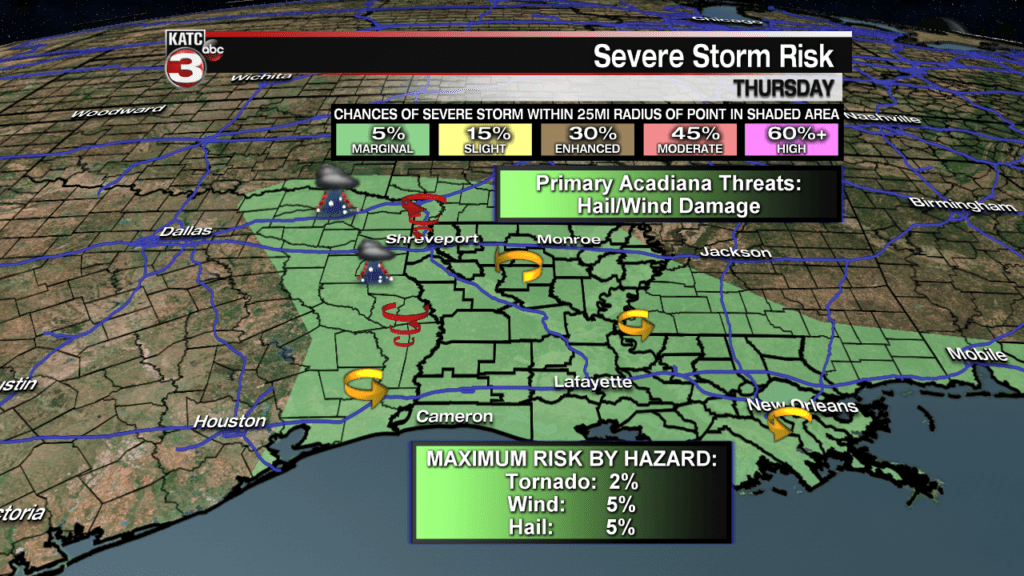 Most of the storm metrics indicate ample wind shear for severe storms, but lower level instability (or lack of thereof) may keep storms from rooting into severe weather modes. 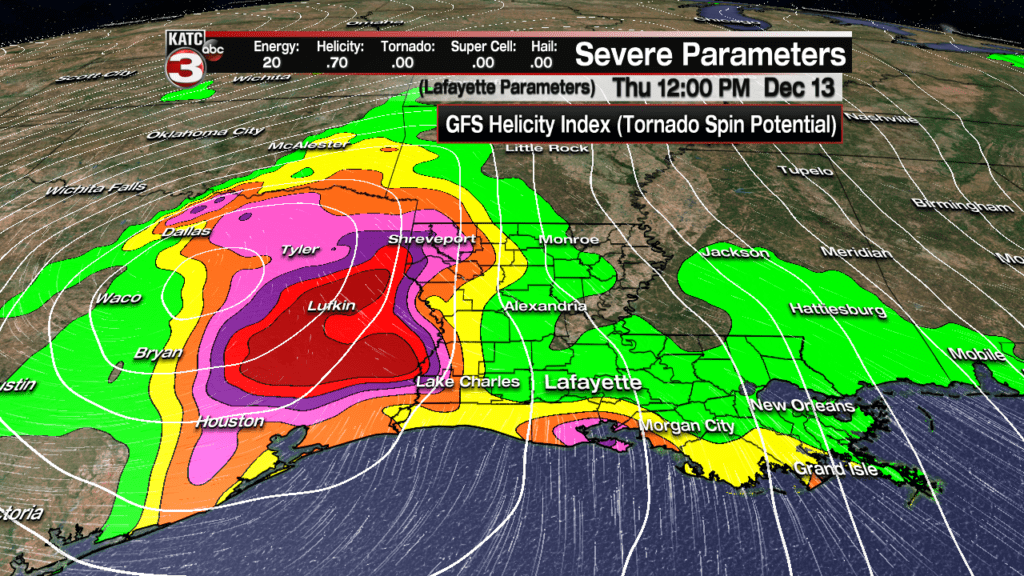 Nonetheless, per where the greatest GFS helicity forecast, or spin potential that could set off rotating super cell storms, could be greatest if they were to develop, in extreme Eastern Texas into the western-most portions of Louisiana northward toward the Arklatex.

Nonetheless, anywhere the storms get going from the late morning into the early afternoon, there could be a few embedded severe storms…but at this time, we are not expecting to be under a weather “watch” area tomorrow, but that does not necessarily mean there won’t be any severe storms that form.

The most likely mode of any severe storm activity would be for hail and/or damaging winds with a risk of 5% occurring within 25 miles of any point in the outlook area, while the risk of a tornado will be closer to 2%. 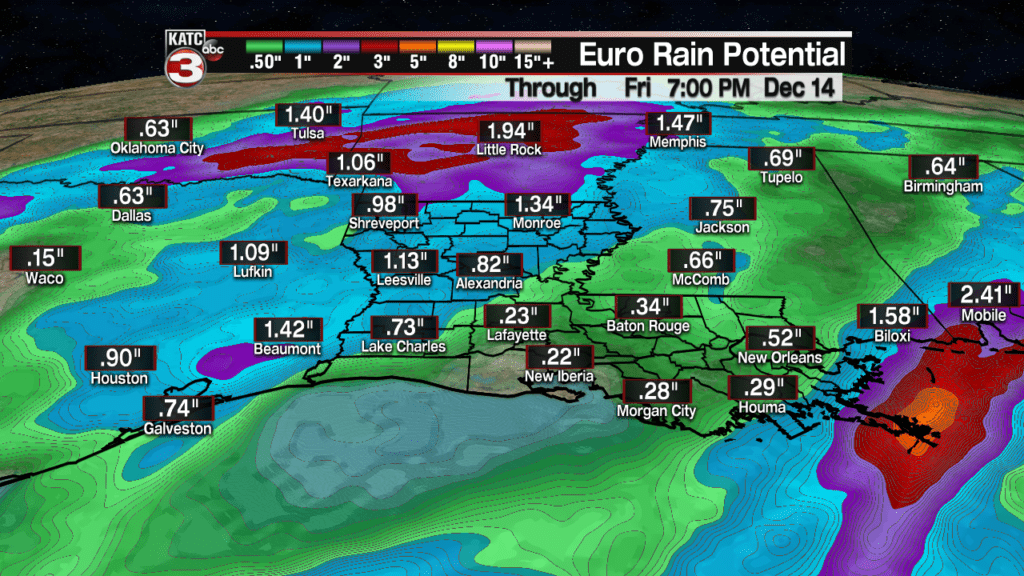 Rainfall estimates are all over the place for Thursday with European Model unimpressed while GFS Model is a little more bullish on a better soaking. 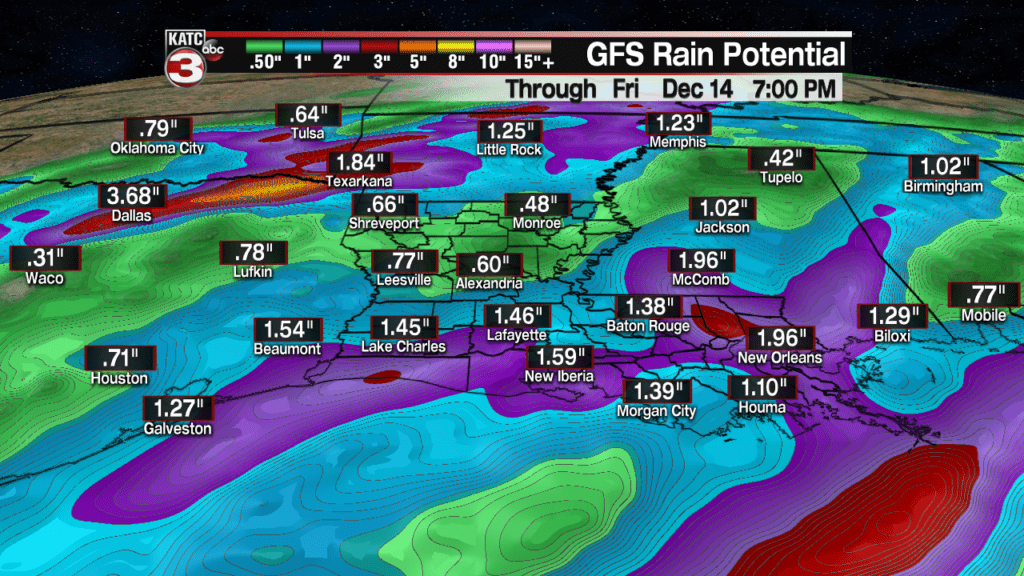 The KATC RPM FutureCast Model in the middle on its latest run with a few stripes of 1-3″ of rain possible, but there could also be some spots that catch 1/2″ or less. 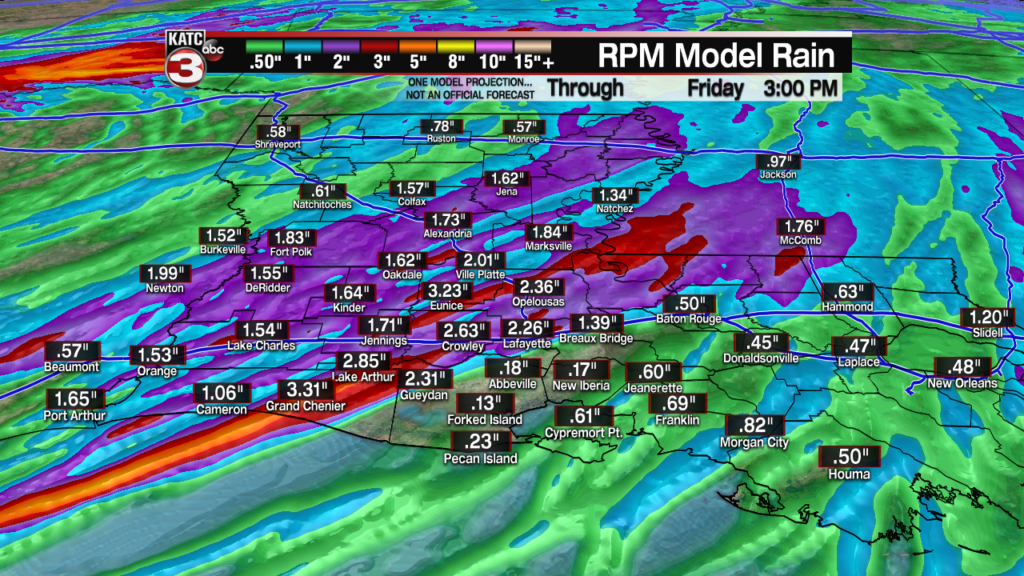 For now we can stay with 1-2″ for many, for some a lot less, but a few spots may push up to 3″ per the aforementioned RPM Model.

There shouldn’t be any flood significant issues Thursday but be wary on the roadways for ponding and minor flooding when the storms are cooking.

And there might be the opportunity Thursday night, after midnight for a few hours where Acadiana may see a very brief clearing period…if so, it would be an opportune time to try to catch the Geminids Meteor Shower…you can read more about that here. But there is zero guarantee on this potential brief clearing period! 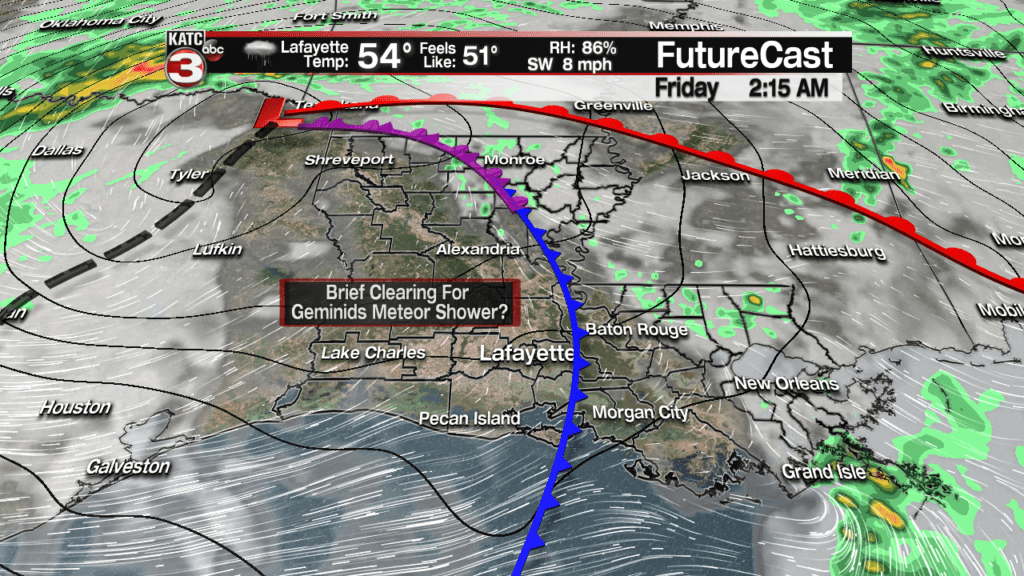 And like the weather system that impacted the area this weekend, the upper low portion of this weather system will lag behind and move across Louisiana Friday bringing back and keeping clouds locked in along with the chance of periods of light rain and/or patchy drizzle and mist. 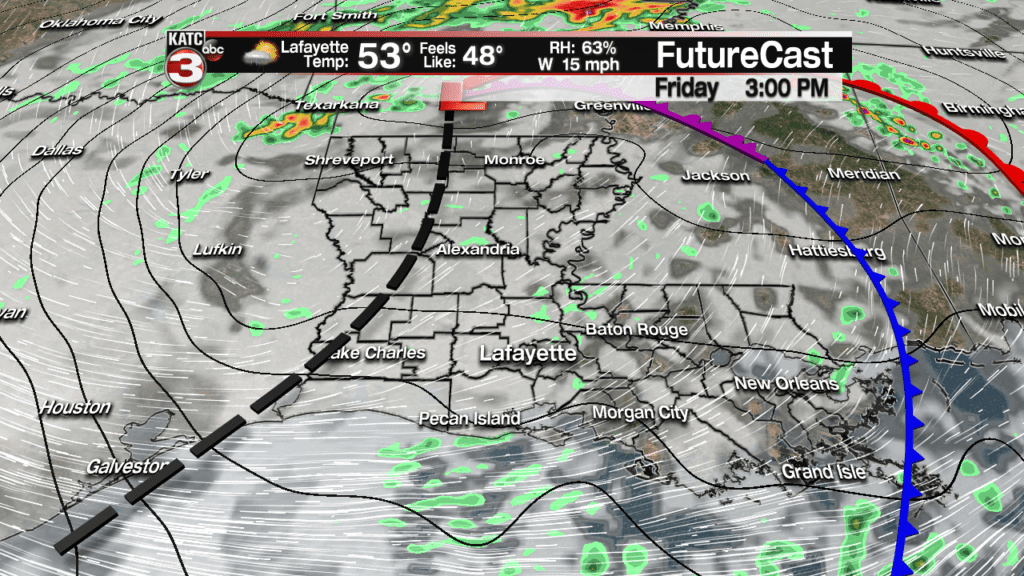 Temperatures Friday could stay in the 40s to lower 50s all day.]

The weekend looks seasonably cool and dry but there may still be a fair but of cloud cover in the region along with a few intervals of sun possible.

Look for temperatures to remain seasonably cool with highs in the upper 50s Saturday and low to mid 60s Sunday, while night time lows dip into the lower 40s.

The pattern next week still looks rather quiet, with the slight chance of a few showers possible by late Wednesday.

The latter part of the weekend into the first part of the following weekend looks good for now.