Models this week haven’t changed much at all when it comes to the rainy event that’s planned this weekend. The last few days have been quite pleasant with sunny skies and cool temperatures. Thursday is expected to be the transition day as skies will start clear, then clouds will begin moving in this afternoon. Temperatures will also climb a few degrees, into the mid 60s, which is normal for this time of year. As the winds shift to the southeast, it will start to become more humid, although, noticeable changes won’t come until Friday.

A frontal boundary will continue to move slowly southward from the middle part of the country to the Red River Valley areas of Oklahoma and Texas. This will bring shower to the ArkLaTex later this afternoon and evening. Overcast conditions are expected by the end of the afternoon into the early evening as this front gets closer to Acadiana. Overnight, skies will remain cloudy, and those clouds will stick around for Friday. Most of the precipitation will remain north and west of the area through the early part of Friday afternoon. Western areas will start to see a few showers by mid afternoon, eventually spreading across the entire region by Friday night. Highs Friday will stay in the mid 60s. 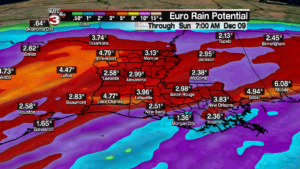 A strong upper low moving from the desert southwest will slide eastward over the Rio Grande Valley into south Texas. This will help generate another surface low along the front as it sags toward the coast. This low should move eastward along the Gulf Coast during the day Saturday. Rain will be likely, with heavy downpours at times. Total rain accumulation is still forecast to be in the 2-4 inch range starting Friday night and lasting through early Sunday morning. Severe weather may still be a possibility Saturday, especially along the coast.

Rains will end before sunrise Sunday, and skies should remain cloudy. Monday, high pressure will build in clearing the skies, but temperatures will remain below normal.