Sheriff outlines details of proposed December tax, including supplemental pay for all officers 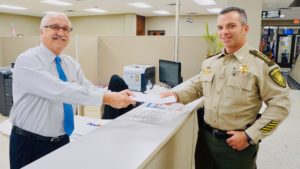 Sheriff Mark Garber has filed a resolution with the Lafayette Parish Clerk of Court outlining his plans for the 1/2 cent sales tax proposition on the December 8, 2018 ballot. This covenant with the voters establishes exactly what the Sheriff is promising to use the money collected for.

According to the Sheriff’s Office, the covenant is binding and enforceable, so they could be sued if they don’t use the money as outlined below.

You’ll recall the Sheriff’s Department had been waiting to release the details of the proposition until all law enforcement entities involved could weigh in on what they wanted to see their portion of the tax go.  All city law enforcement agencies, with the exception of the city of Lafayette, had done so, so the resolution outlines that supplemental pay will be offered to police chiefs, officers, and deputy marshals if the tax is passed.  For the city of Lafayette, the resolution offers up several different options, which Lafayette government officials would have to decide on, essentially either raises for their officers or funding new officer positions within the Lafayette Police Department..  The Sheriff’s Department said the smaller departments told them their greatest need was to keep good officers employed and raising the pay would help their retention rates.

Also, as part of the proposition, the Sheriff promises to reduce the millage amounts once their outlined goals are met.  The sheriff says if LCG chooses not to accept the money collected from the tax for the police department, they’ll pay off their debt more quickly and be able to reduce the millages that much sooner.

Lafayette Mayor-President Joel Robideaux has reportedly been in discussions with Garber about the tax.  Robideaux has been unavailable for comment.

The Lafayette Police Union spoke out against the tax – read their statement below the details of the covenant proposed by the sheriff.

A portion of the annual proceeds collected is to be expended to fund law enforcement services provided throughout the District through formal intergovernmental agreements with each Municipality in the District, including the City of Lafayette, City of Broussard, City of Carencro, City of Youngsville, City of Scott and Town of Duson, the University of Louisiana at Lafayette, and the Lafayette City Marshal as follows:

If the proposition passes, the covenant also outlines they’ll adjust other millages currently being collecting.  For example, they’ll stop collecting a 1% sales tax that began in 2003 that is currently being collected within “Law Enforcement Sub-District No. 1.”  They also say they’ll roll back another millage started in 2000 by $5 million dollars once they’ve repaid the debt for the construction of the Public Safety Complex, saved the equivalent of a 12-month operating budget in an emergency fund, and funded $39,750,000 toward the completion of capital improvements and projects referenced in the resolution.  The Sheriff also says they could reduce the tax collected further, if surplus revenue is seen.

The Police Association of Lafayette, whose membership is comprised of a large majority of Lafayette City Police Department officers, wishes to reiterate its stance on the Sheriffs up-coming half cent parish wide sales tax. There currently exists no covenant or agreement between the Lafayette Police Department and the Lafayette Sheriff’s Office regarding tax revenues. Sheriff Mark Garber is attempting to fill his coffer, at the expense of the citizens of Lafayette, while providing minimal enforcement services within the city of Lafayette. The Lafayette City Police Department is the primary enforcement service provider for the city of Lafayette, and its officers stand proud and ready in their continued and dedicated service. Seventy percent of the total revenues generated from the Sheriffs half-cent sales tax would be reaped from Lafayette city residents, whilst the city would see only 1/20th of that amount being supplied to the city police department. In the past, the sheriff has made verbal commitments to the Police Association of Lafayette, while later doing another, effectively breaking his word. It is widely known that the best predictor of future behavior is past performance, and knowing that, P.A.L. finds it hard to trust the sheriff when he mentions any covenant or agreement. Again, there is currently nothing that would legally bind the sheriff, or any of his successors for that matter, in providing any amount of tax revenue to the city of Lafayette. While we do appreciate the fact that the Sheriff is attempting to bolster law enforcement and its mission, we disagree with his lack of fiscal accountability. The Police Association of Lafayette cannot support Sheriff Mark Garber’s taxation endeavor under these circumstances.

The election will be held on December 8th.