The Youngsville Police Department is being proactive about bus stop safety after several national reports of people getting hit.

At least ten people were seriously injured, and two students were killed in separate incidents.

Chief of police Ricky Boudreaux says the school bus stop on the corner of the Copperwood subdivision is particularly dangerous.

It’s on the Youngsville Highway which turns into Lafayette Street when entering downtown.

Boudreaux says he’s tried to persuade DOTD to bring down the current speed limit of 50 miles per hour on the busy thoroughfare, but they haven’t. 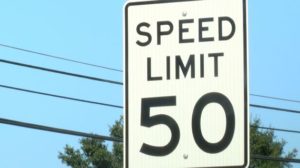 Boudreaux says he’s tried to persuade DOTD to bring down the current speed limit of 50 miles per hour, but they haven’t.”There are about twelve kids that gather here to board the bus. We’ve instructed. and the school board has instructed, the school bus driver to camp partially into the oncoming lane to make cars aware that they must stop,” said Boudreaux.

All students in Youngsville have also been instructed to not walk onto the shoulder of the road to board the bus until all traffic has stopped.

Boudreaux says his traffic department regularly deploys two motorcycle patrol officers who follow the school buses to make sure that both the bus driver and motorists adhere to bus stop traffic laws.

“The yellow lights, when they’re activated by the school bus driver, are an indication for drivers to slow down, not to speed up. That is in preparation of the stop signs being deployed, where it is a state law that you must stop until those stop signs are retracted,” said Boudreaux.

Not breaking the car to a complete halt at a bus stop can lead to a $500 dollar fine.

Here’s a link to CNN’s article on the national uptick of people getting hit by motorists.