A storm system crossing along coastal Louisiana overnight into early Thursday will bring a good soaking to Acadiana with rain and a few embedded storms likely. 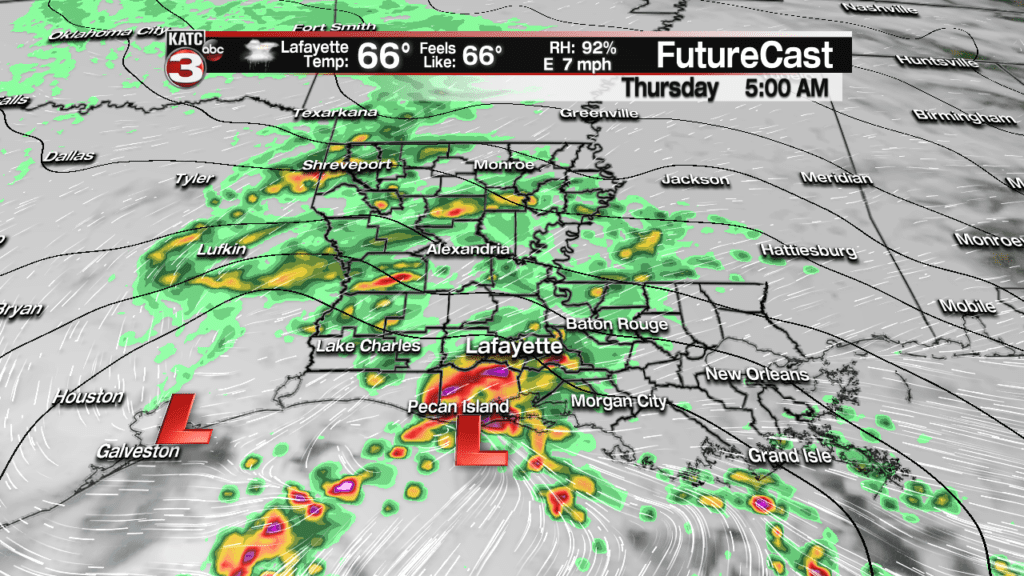 While there is some moisture in this system from former Eastern Pacific Hurricane Willa, computer models continue to downplay rain totals across the area. 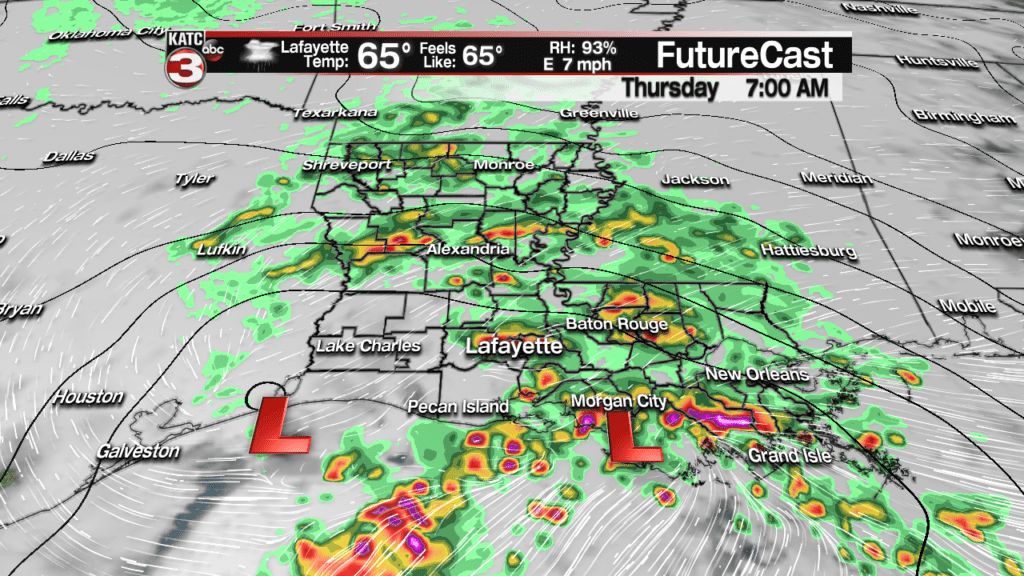 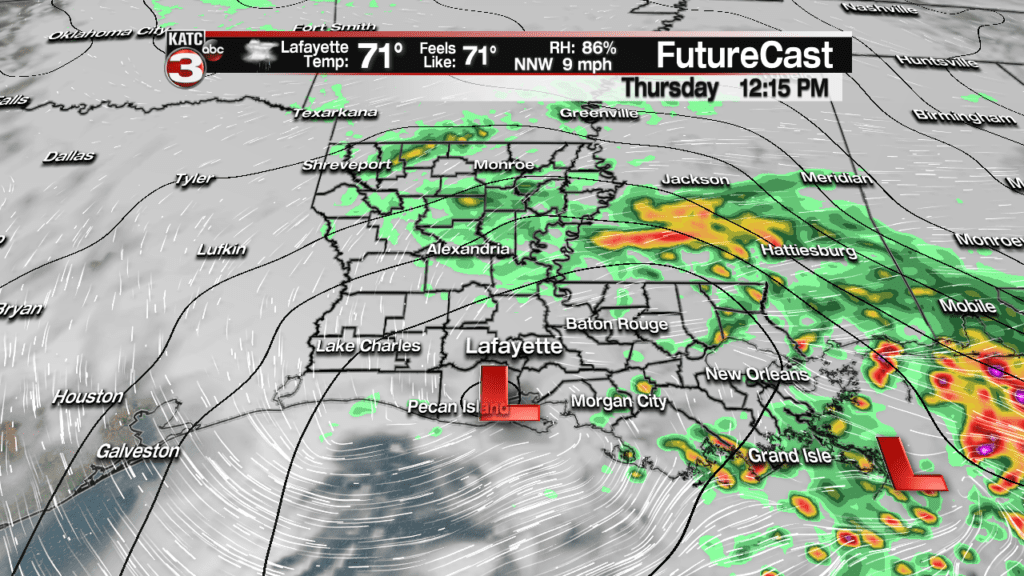 But even with that in mind, since the system will be rather progressive, a rainfall forecast of 1-2 inches is anticipated with isolated higher amounts especially near the coast.

Heaviest rains of up to 5-10″ may occur offshore in the Gulf of Mexico.

Inland, the flood threat shot be at a minimum, but will still require vigilance through the morning hours Thursday in case heavier storms develop on the radar.

Heaviest rains are expected to develop in the area between 2 and 4 am with activity near 100% coverage of the area through mid-morning before the rains taper to lighter activity, and likely some misty drizzle into the afternoon.

A few embedded thunderstorms are likely, especially along the coast toward daybreak. While any severe weather threat should be confined offshore, there could be a few strong storms with gusty winds and torrential downpours right near the coast.

And speaking of the coast, with the persistent east-northeast winds Wednesday, tides had become elevated along the Louisiana Coast, up to 1-1.5 feet above normal.

Tides may rise up to 2 feet above normal overnight into early Thursday as winds briefly turn more southerly allowing water to pile-up.

Readings are from the Freshwater Canal Locks to Grand Isle were roughly 1.5 feet above normal late Wednesday afternoon …some minor coastal flooding from Coastal Acadiana through Grand Isle, especially during the period of high tide times, which are roughly 2-4 am Thursday, will be possible. 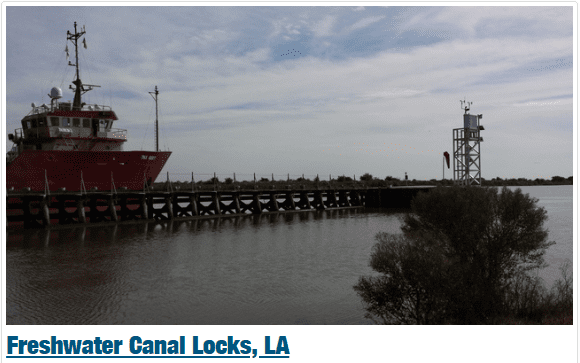 Breezy and seasonably cool conditions will advance into the region Thursday night into Friday with clouds decreasing to partly sunny skies by Friday afternoon. 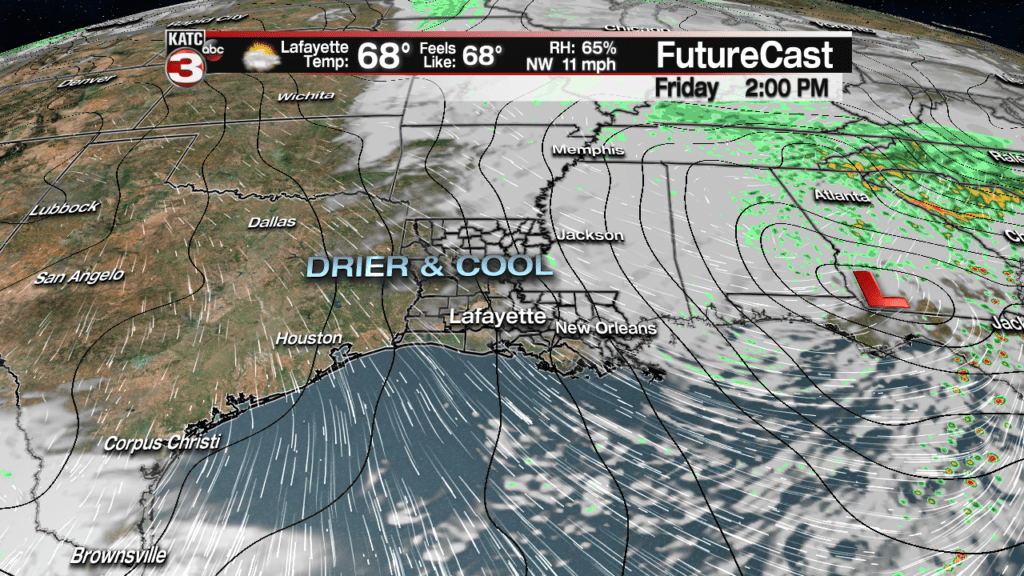 For now the weekend looks great with mostly sunny skies accompanied by highs in the mid-upper 70s Saturday and up to the lower 80s Sunday.

A dry cool front will pass through the region Sunday night insuring plenty of sunshine and seasonably cool temperatures early next week.

It’s still looking good for Halloween with trick or treat temperatures right in the sweet spot, near 70 degrees.

After Thursday, Acadiana’s next weather-maker, with showers and storms, should arrive by next Thursday.

Meanwhile in the tropics, while an are of disturbed weather in the Atlantic Basin has a 60% chance of tropical or sub-tropical development…it shouldn’t have any major land impacts. 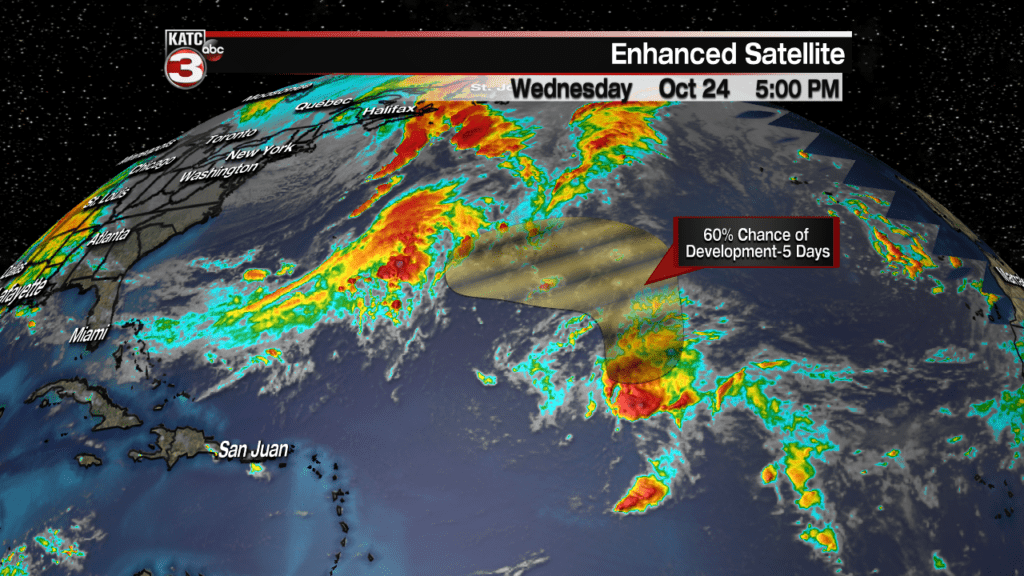 While on the other side of the planet, in the Western Pacific, powerful Super Typhoon Wutu slammed the Northern Marianna Islands of Saipan and Tinian (north of Guam) as a catastrophic storm with 180 mph winds. 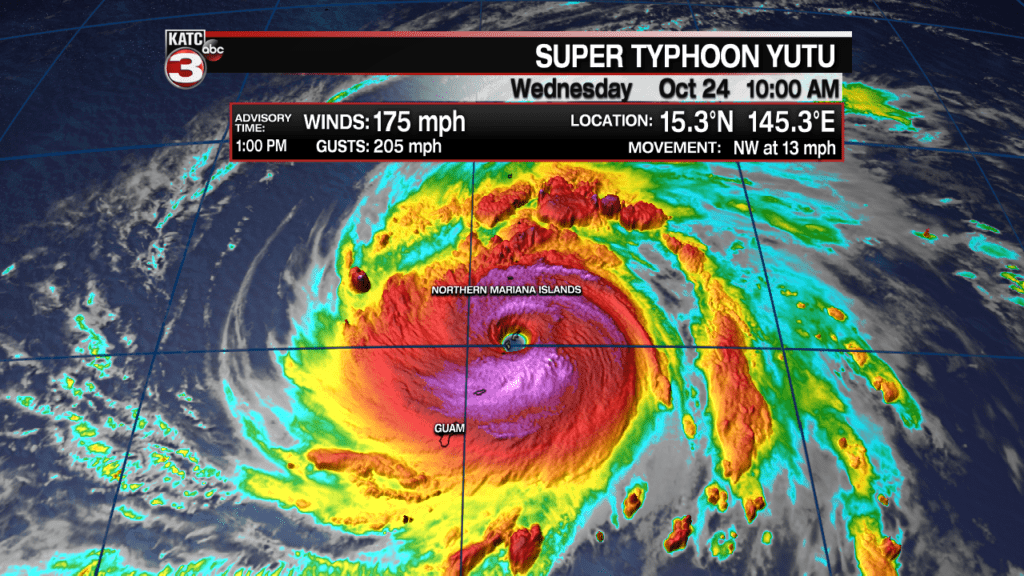 Extreme damage to these areas should be expected, but there were no official reports as of press time. 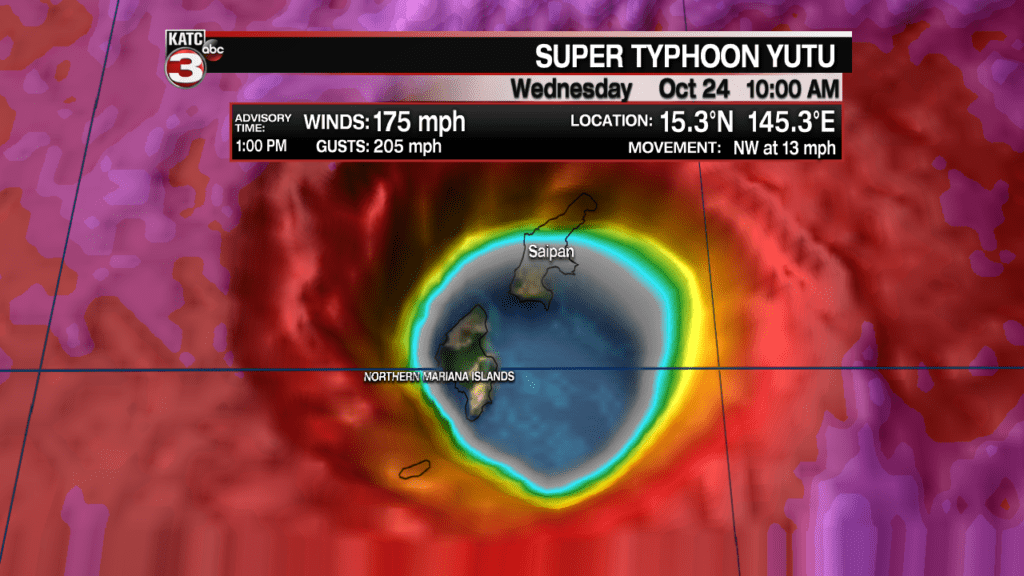 Yutu went from a 50 mph tropical storm to 180 mph sustained winds with gusts to 220 mph in 48 hours. Another high end example of a rapid intensification cycle and nearly most perfect eye making landfall.

Typhoons are the same as hurricanes, only difference being the ocean basin that they are located in. A super typhoon is akin to a major hurricane.