A Flash Flood Warning issued for Lafayette, Iberia, Vermilion, and St. Martin Parish has been extended.

Residents are reporting heavy flooding on roadways in places like Youngsville, St. Martinville, and Declambre.

The Iberia Parish Office of Homeland Security and Emergency Preparedness issued a statement on some localized street flooding within the parish.

Roadways reportedly flooding in the parish include:

Abbeville Police say that heavy rains have caused parts of the city to receive large amounts of standing water.

The department standing water on roadways should be considered a potential hazard. Motorists are being advised to use caution when operating their vehicles and not to travel through standing water.

Lt. David Hardy says that citizens should be aware that it is against the law to drive through or around barricades or through standing water that may create a wake into homes and business.

The following is a list of streets which have been reported as having standing water and should be considered a potential hazard: 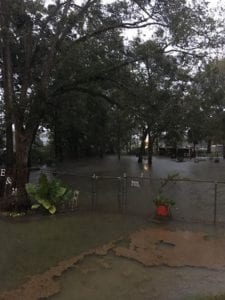 Abbeville flooding Eva GuillotteMotorists should use caution when traveling on flooded roadways.