The best hunting retriever dogs across the continent are competing at the Fall International Grand this week in St. Landry Parish.

The hunting competition is put on by the Hunting Retriever Club (HRC), which consists of 135 clubs across North America, and they’re here in Acadiana this week.

This year’s Grand is being hosted by the local Cajun HRC.

“A lot of dogs, a lot of families, a lot of dog owners are here, supporting this event. It goes five days, so it’s an endurance competition to try and make that next day for the dogs and for the handlers,” explained Lori Greer, who does public relations for the club.

The event is held on private farmland in the Washington – Grand Prairie area of St. Landry Parish. The influx of people is boosting the local economy.

”I know that we’ve got handlers here from Canada, and from the East Coast, and from the upper Midwest, so as you can imagine, they’ll come down here in a week in advance. They’ll find lodging somewhere, and they’ll find landowners gracious enough to let them train so that their dogs can acclimate to this heat and humidity here in Louisiana,” said HRC President Glenn Dye. 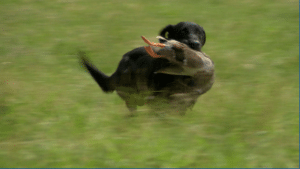 The more than 500 dogs are judged on their marking and memory.

“The dogs are required to meet certain criteria. They’re asked to not only pick up one bird that they see fall, but they’ve got to pick up multiple birds that they remember where these birds are,” explained Dye.

Cohesion between the handler and the dog is also scored.

“These dogs also have to make a retrieve that they never saw fall. They have to trust the handler that he handles the dog to where the bird is so that they can successfully pick it up and retrieve it,” said Dye.

Officials say the Grand is the equivalent of the Super Bowl for hunting retriever dogs and their caretakers.

“Our primary purpose is the betterment of the hunter retrievers. In addition to that, what we’re doing is we’re testing the retriever for its usefulness as a hunting companion,” explained Dye. 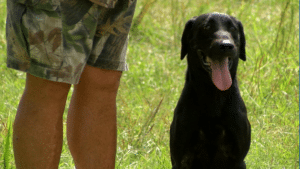