Louisiana applying for membership in international organization of French-speaking countries

Louisiana is in the application process to become an official member of the “Organisation Internationale de la Francophonie,” or OIF.

The international body is comprised of 84 French-speaking countries, provinces and governments.

Membership could mean access to funding as well as a place at the international table.

OIF will vote next week on Louisiana’s acceptance at their bi-annual summit in Armenia.

Louisiana is home to 250,000 Francophones and 5,000 French immersion students enrolled in the state’s Department of Culture and Tourism program, CODOFIL.

The acronym stands for the Council for the Development of French in Louisiana.

“The economic element of membership in the Organisation Internationale de la Francaphonie is significant. Right now we have a robust French Immersion system and we’re developing really students who come out of eighth grade (to be) bilingual. The next step for them would be to create a space for them in the market where they can use their French,” said CODOFIL Communications Manager Matt Mick.

Acceptance into the OIF could mean more access to funding which would create not only more Louisiana native French teachers, but French professionals.

“Hopefully businesses in other French speaking areas: Canada, France, Africa is a huge developing market, will look to Louisiana and say here’s an interesting in-road into the United States, where French is already spoken, where we might be able to do business,” said Mick.

CODOFIL has been a major factor in getting Louisiana’s membership into the OIF to a point of being voted on.

In fact, they wrote an 80 page dossier highlighting why Louisiana should be a memeber, and they’ve been attending OIF summits since the 1990’s. 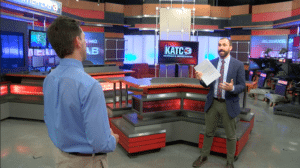 However, one major player in the application process is Scott Tilton.

Tilton is a New Orleans native, and began approaching high-ranking political officials about getting Louisiana accepted into the OIF while he was attending graduate school in Paris in 2016.

“The way that this developed over the course of the last two years was (I had) to work with the Federal Government. With the State Department and specifically with the U.S. Senate, and through Senator Cassidy’s office we were able to work with the OIF to get state approval to be able to apply. And, then we worked with the state level to be able to have our application compiled and submitted back in April,” explained Tilton.