It won’t be a wash-out, but showers and storms return this weekend

Don’t cancel any outdoor plans just yet, but do plan on a pretty good chance of scattered, “on and off” showers and thunderstorms returning to Acadiana this weekend.

Deep tropical moisture and instability along the Louisiana Coast Friday will slowly advance northward into Louisiana through this weekend.

As a result, skies will remain mostly cloudy in Acadiana with scattered showers and storms developing through Saturday afternoon.

Not everybody gets wet as chances will be in the 50% range (as always give or take 10%) Saturday.

The difficulty will remain in forecasting where and when the upper level disturbances will manifest, so there will likely be some spots that see no rain, while others get a good soaking.

Chances of thunderstorms Sunday should be a little better than Saturday, tentatively set at 60%.

Per usual, some areas may see barely enough water to wet the ground this weekend, but there will probably several isolated spots that pick up a couple of inches of rain. No flooding issues however, are anticipated at this time.

And thanks to the clouds and showers, temperatures will top out no higher then the upper 70s to lower 80s this weekend.

In the near term, some light fog may develop for Saturday and Sunday mornings, but visibility shouldn’t go too low as clouds in the region will keep a lid on the lower atmospheric saturation.

Moving into next week, high pressure will bank into the region from the northeast and east helping to lower our rain chances, allowing for more sunshine, and producing higher temperatures.

Rain chances will decrease to 10-20% Tuesday through Thursday while daytime highs top out in the upper 80s to near 90.

By the end of the week into next weekend, another frontal boundary will approach the region allowing for increasing rain chances next weekend…no promises of any real cool weather yet…but we have to be just weeks away from that!

In the tropics, Hurricane Rosa in the Eastern Pacific, after reaching 140 mph sustained winds (Category 4) earlier Friday, has begun to weaken with 120 mph winds (Category 3) as of late Friday afternoon.

This system will continue to weaken over the next several days while turning northward toward Baja Mexico and eventually delivering some tropical moisture to portions of the Southwest U.S. early to mid-next week. 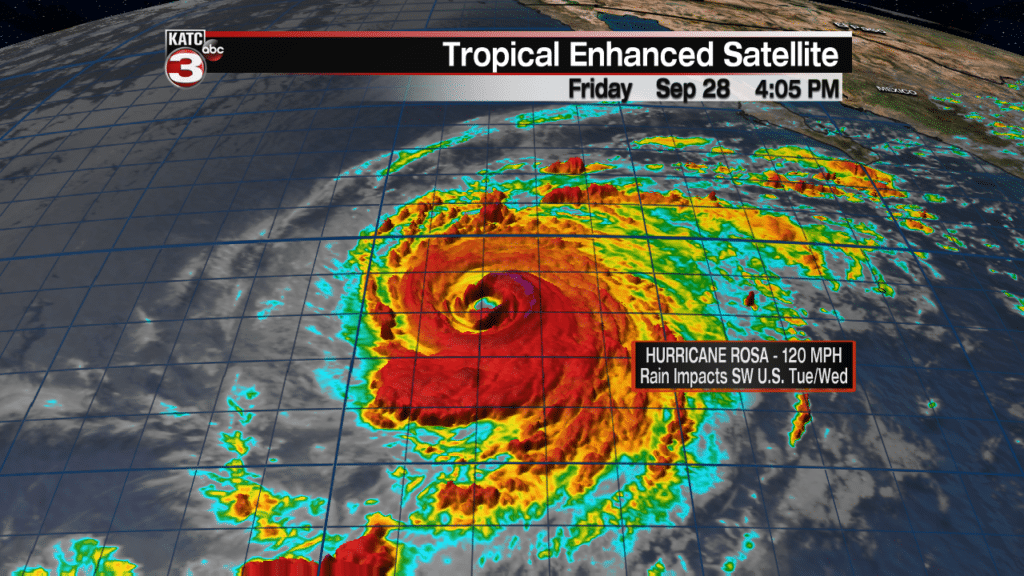 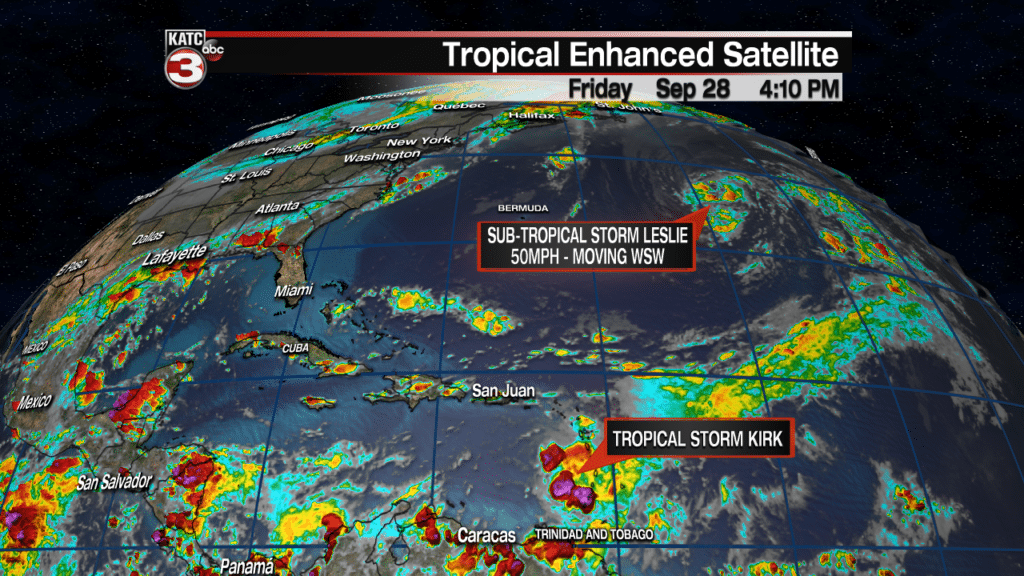 Leslie should not be a threat to land at least over the next 5-7 days…maybe forever, we’ll “sea”…full pun intended.

Refer to the National Hurricane Center’s (NHC) glossary of terms for the difference between sub-tropical, extra-tropical and tropical cyclones here.

A little closer to home, Tropical Storm Kirk is on its last legs thanks to increasing upper wind shear…the storm is expected to dissipate to an open tropical wave or disturbance Saturday. 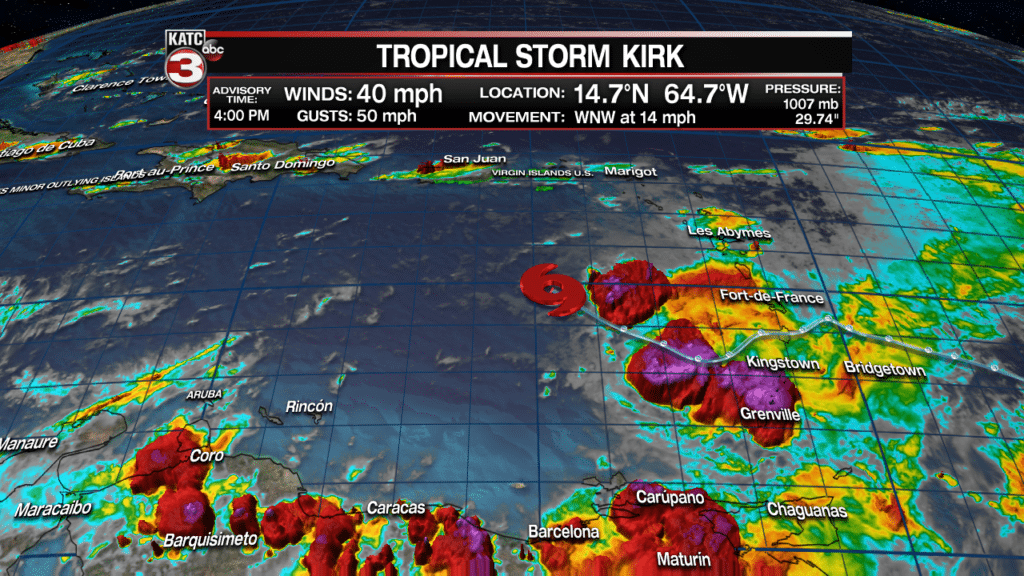 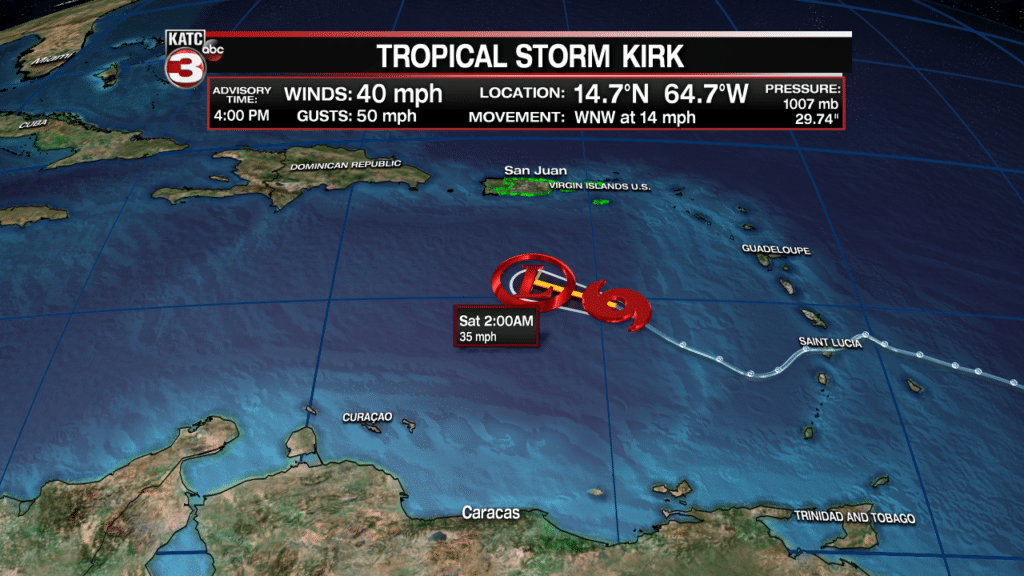 The remnants of this system should not pose a threat to the Gulf of Mexico. 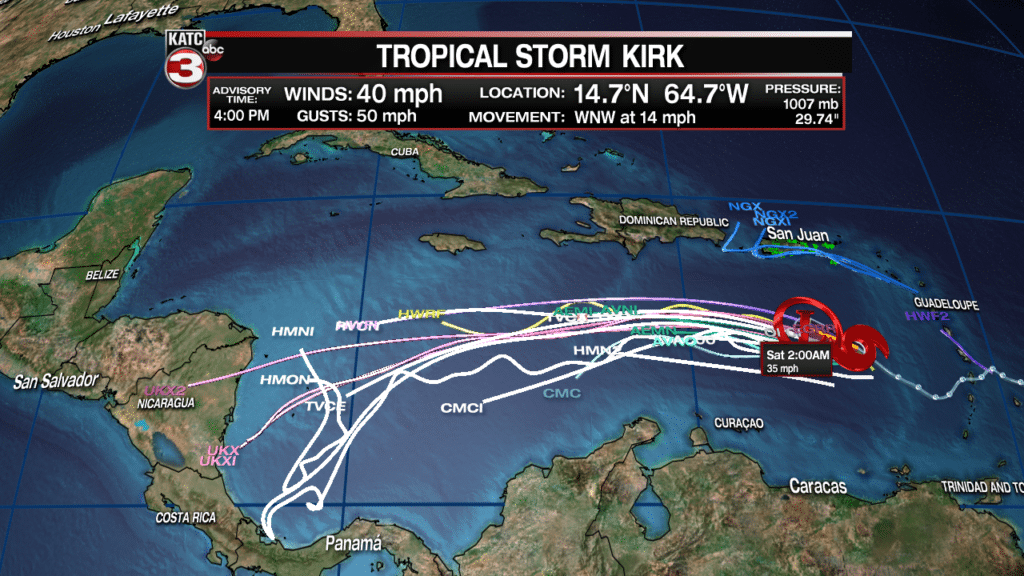