Stationary front keeps it “unsettled” into the weekend

A “waffling”, nearly stationary frontal boundary will keep plenty of clouds and some rain chances in the forecast Friday into the weekend.

Highest rain chances Friday will be closest to the coastal parishes over the next couple of days. 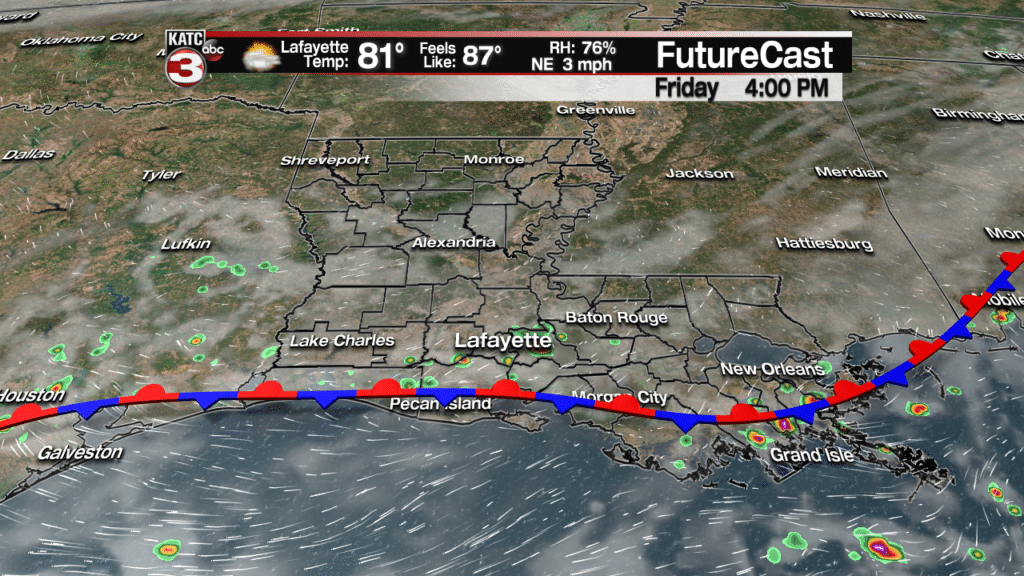 Rain chances Friday and Saturday should be in the 30% and 40% ranges respectively along the the I-10 parishes, but higher numbers are anticipated along the coast and over Southeastern Louisiana and then also back toward Southeast Texas. 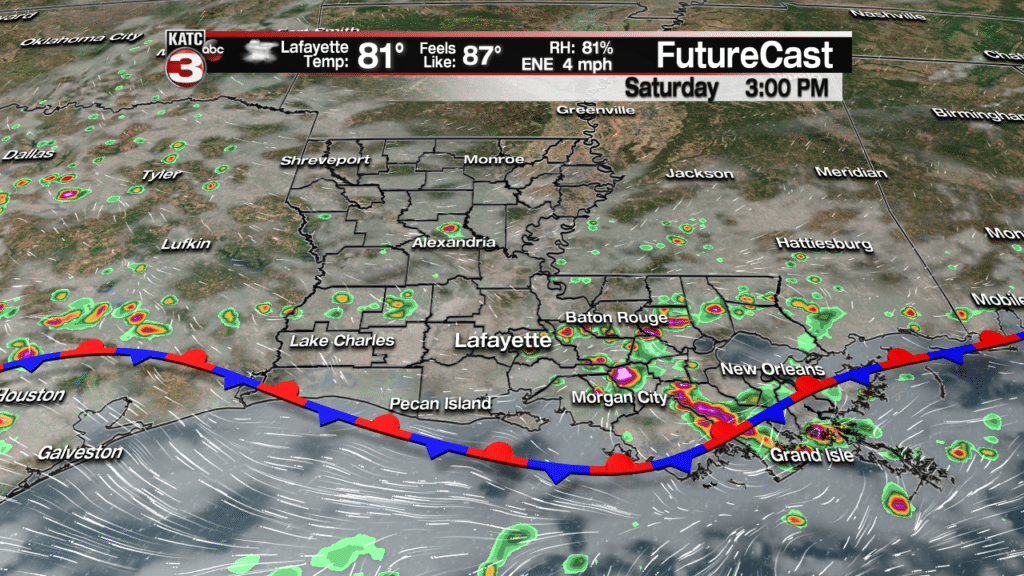 Rains should be most closely associated with the rather unpredictable stationary front, but should be confined mostly toward the afternoon hours.

Activity should be more limited across the northern-most parishes of Acadiana where atmospheric “lift” will be the least.

The frontal system should begin to advance decidedly northward Sunday, allowing for a better chance of scattered showers and storms, especially during the afternoon hours.

Behind the aforementioned frontal boundary it will be a little more comfortable over the next day or two, especially across the northern Acadiana parishes.

Look for lows closer to 70F over Friday and Saturday nights with highs in the low-mid 80s this weekend.

Moving into next week, high pressure will try to edge into the area from the south and east, which should help to lower Acadiana’s rain chances down to the 20-30% range, while daytime highs get back into the mid-upper 80s as more summer-like southeasterly winds re-establish across the region.

As for the tropics, the National Hurricane Center (NHC) is highlighting and tracking Post-Tropical Cyclone Leslie, expecting the system to redevelop and spin in the open Atlantic i the days ahead. 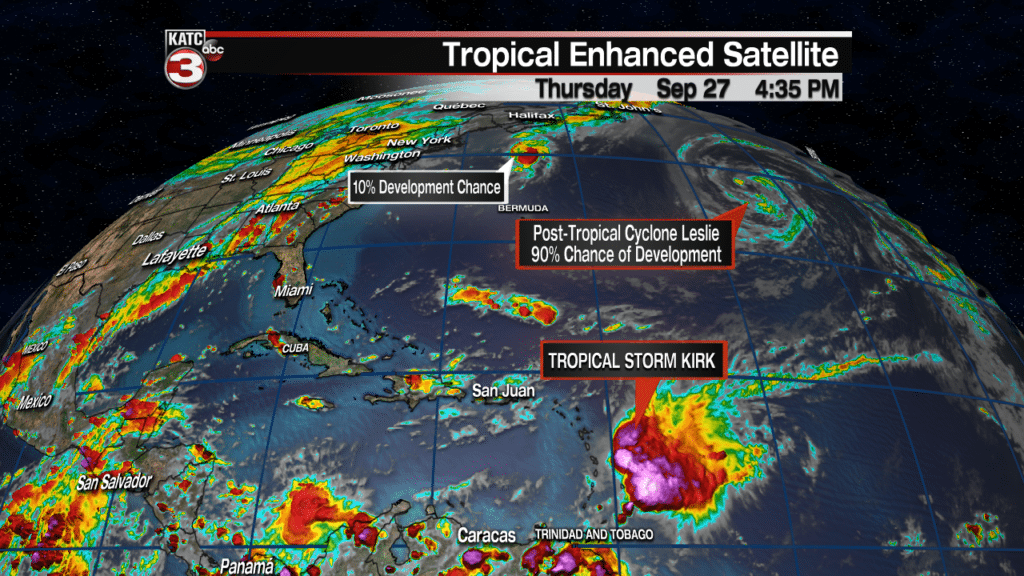 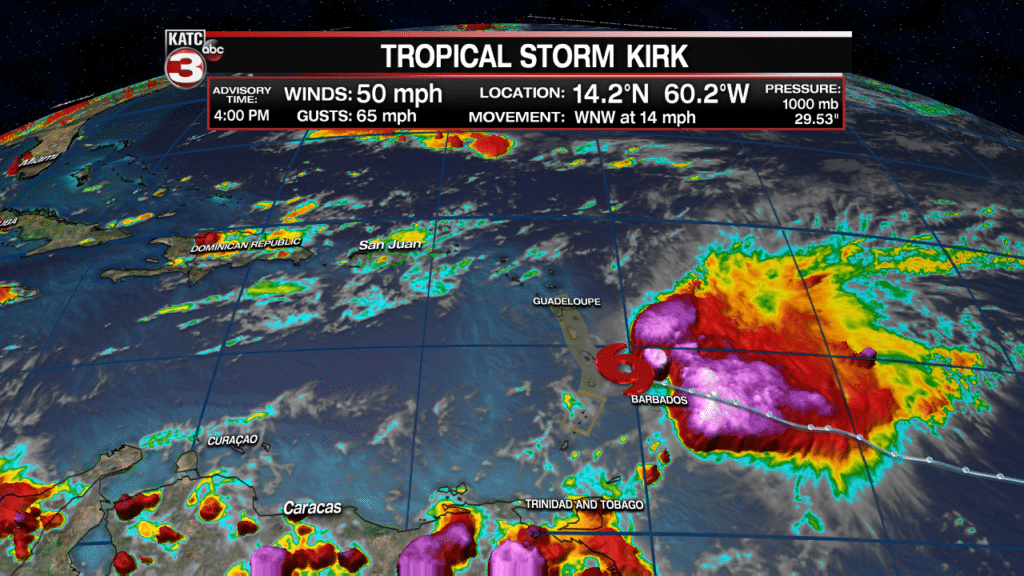 The NHC expects Kirk to weaken further to a disturbance or tropical wave thanks to the shear, by Saturday in the middle of the Caribbean Sea…also know generally as the tropical “grave-yard”…especially during the onset of an El Nino pattern. 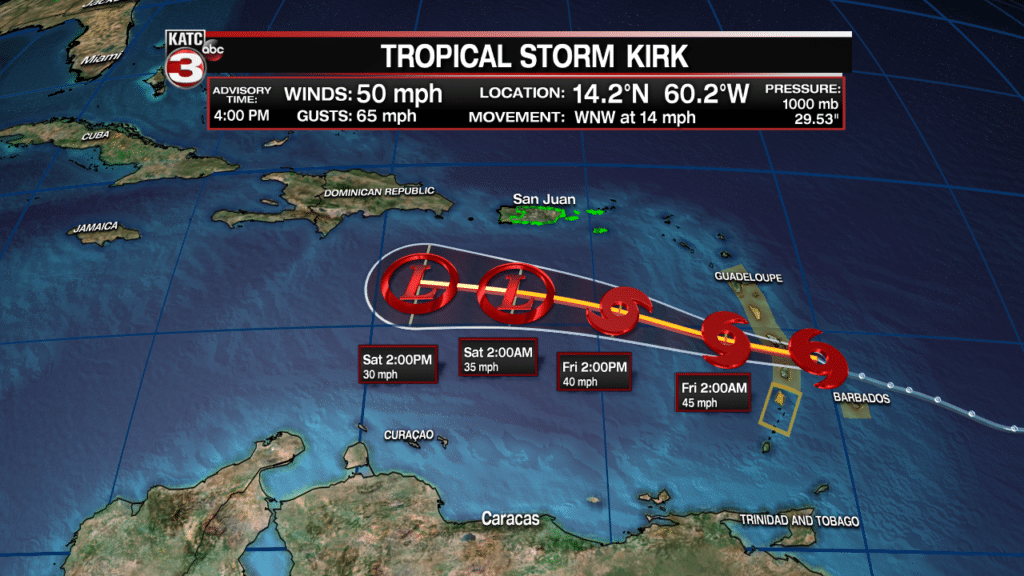 The remnants of Kirk’s system, and its deeper tropical moisture may get shunted toward Central America, and/or eventually move more northward toward Hispaniola and perhaps the Bahamas into early next week.

Re-development in some shape or form cannot be completely ruled out, but is not anticipated at this time. 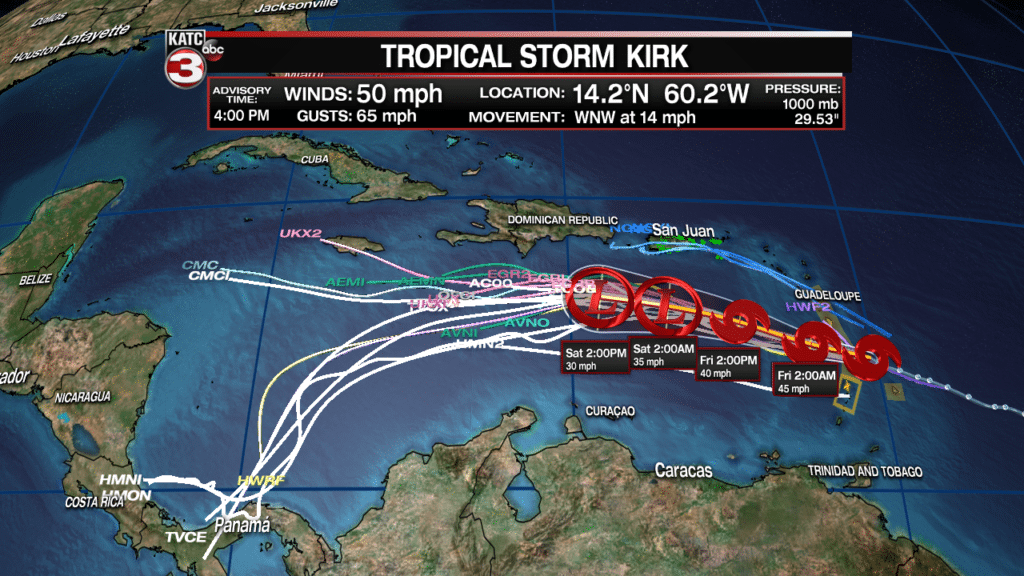 While the future of Kirk beyond this weekend is dubious, the remnants will continue to be monitored just in case.

Kirk is not expected to pose a significant threat to the Gulf of Mexico at this time.