Saturday is day three of the Gueydan Duck Festival, and events are still going on.

The festival is more than just rides and music; it’s also a celebration of Gueydan’s deep-rooted tradition and culture.

Sportsmen and women from the South and beyond come to Gueydan every year for the area’s amazing duck hunting.

That’s why the community and local businesses rally around this festival, celebrating one of their biggest economic drivers: the duck.

Companies selling pro duck hunting gear is a central part of the festival.

“It’s a big deal. This is one of our better shows that we work. We work several shows throughout the country, but we always feel like this is kind of home to us, you know,” explained Watts.

Duck Nutz Decoy Anchors was at the festival with a booth demonstrating their innovative duck decoy technology.

“So, we got the first friction driven decoy anchor. Depending on where you’re hunting, you can set depths with depth adjustability. When you’re done hunting, lock your weights back to your decoy’s kill,” explained Duck Nutz Founder & CEO Hunter Andras.

The festival also celebrates the centuries-old culture and tradition of duck hunting in Acadiana. The Acadiana Woodcarvers Guild are helping to carry on that tradition. They spend hundreds of hours carving decorative duck decoys out of tupelo wood.

“It kind of evolved into this right here. But, it used to be just plain and simple just to attract ducks, so you can get them in shooting range. Now, it’s come to this decorative, and you have competitions and stuff like that,” explained Acadiana Woodcarvers Guild member Kimbele Dupur.

Based on the number of duck hunters and enthusiasts gathered at the festival, that culture and tradition appear to be as strong as ever.

“We have multiple hunting lodges with sportsman’s guides. I mean, there are several different outfitters here, but this is where you can get to meet people and stuff like that. Get to know where those good spots are by mingling and talking with people and the locals from here,” explained Gueydan Duck Festival President Jerrod Broussard. 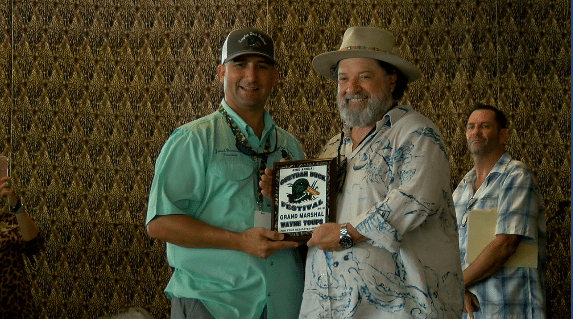 “Well, you know what, my father was originally from here, so I have ties here. And, I think I’ve played here 15-20 times over the years. So, I’m kind of like a staple here, you know; I’m a part of the community,” said Toups.