Tropical Storm Gordon has maintained its strength this morning. It’s still forecast to become a hurricane later today prior to landfall tonight. Gordon, as of 10am, is located at 28.5 N and 86.8W or about 170 miles ESE of the mouth of the Mississippi River. Winds are still holding at 65mph with higher gusts. The current forecast track is unchanged, with Gordon expected to reach the Mississippi Gulf coast later tonight.

Tropical Storm Warnings have been dropped west of Grand Isle, but remain in place eastward to the Louisiana/Mississippi state line. Hurricane Warnings are in effect for the entire Mississippi and Alabama coasts. Storm surge watches and warnings are up for areas from the Mouth of the Mississippi River eastward into the Florida panhandle. Heavy rains and gusty winds are forecast in the warning areas. 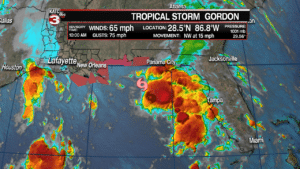 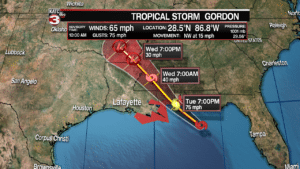 The impact to Acadiana will be minimal. Some squalls will reach the area from the east this afternoon. Additional rains are expected tomorrow, but the heaviest rains will remain near and east of the center of circulation. Locally, breezes may reach the 20mph range later tonight and Wednesday.

The next position/intensity update will be released at 1pm with a full advisory including a new track and cone at 4pm. 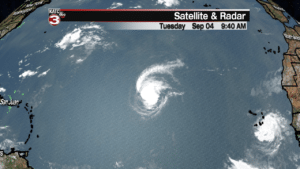 Meanwhile, out in the open Atlantic, Florence has achieved hurricane status. Winds are near 75mph, making Florence the third hurricane of the 2018 season.