10PM Update: No changes to the track as it keeps landfall near the mouth of Mississippi River sometime late Tuesday night or early Wednesday morning.

However, a few changes have been made to the intensity as now the hurricane center believes it will not be until Monday evening before it possibly strengthens to a tropical storm and then on the backside once it makes landfall they have it weakening faster over land down to tropical depression by the time it reaches Alexandria Wednesday afternoon. 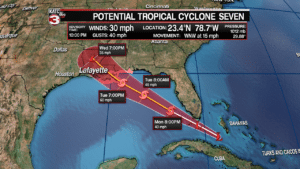 Also, a Storm Surge watch has been issued for areas from the Alabama-Mississippi border to the mouth of the Mississippi River as they could see a surge of 2-4 feet.

As of 4PM Sunday the National Hurricane Center has upgraded the tropical wave near the Bahamas and Cuba to Potential Tropical Cyclone 7. 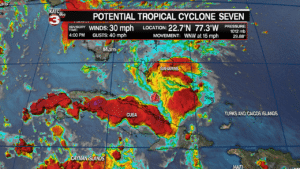 Right now the potential tropical cyclone is producing a relatively unorganized area of showers and thunderstorms but is starting to show signs of circulation forming with winds of 30 mph.

According the the track from the National Hurricane Center they have the system could become a tropical storm Monday afternoon as it pass over the Florida Keys.

If it becomes a tropical storm it will get the name Gordon.

The storm will then quickly race through the eastern Gulf on Tuesday while gradually strengthen as it heads for the mouth of the Mississippi River making landfall sometime late Tuesday night or early Wednesday morning. 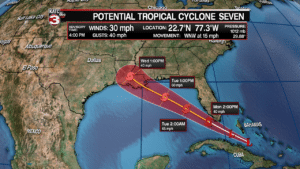 Tropical Storm watches have been issued for areas along the Gulf Coast from the Alabama-Florida line to Morgan City as they could experience minor coastal flooding of 2-5 feet and sustained winds of 40-60 mph. 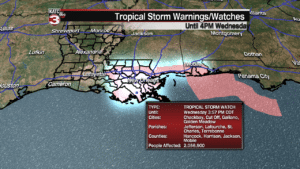 Once making landfall the storm will head WNW towards Alexandria and then Shreveport as it weakens to a tropical depression. 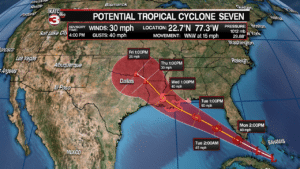 Good news is the models continue to show the system as a a fairly small storm with the worst of the rain and winds on the eastern side of the storm so New Orleans and the Mississippi Coast could see the heaviest rains and winds.

Locally in Acadiana I think we might just see scattered showers and storms on Wednesday and Thursday and maybe some breezy conditions but no major issues expected.

For a complete look at the models and what I think we might expect check out my earlier article here: