Another warm and humid start to your morning. Most areas are seeing fair skies, a few showers have been noted across the Gulf Coast and a few have spread inland toward the LA 14 corridor again, before dissipating. Most of the pre-dawn storms will fizzle out as the sun comes up, but the break won’t be long before new storms develop with daytime heating. Dew points are well into the mid to upper 70s, indicating plenty of moisture at the surface. The amount of water in the column of the atmosphere is quite high, which means any storms that do develop today will be healthy rain producers. Storms will be hit and miss again, so one area could see a few inches of rainfall today, while areas close by could see none. Because of the cloudiness and the rainfall today, afternoon temperatures will struggle toward 90 degrees, but the heat index in the upper 90s will still keep it seeming very tropical.

This wetter pattern is expected to linger at least through Thursday, normal rain chances are expected for the Labor Day weekend. Temperatures will remain in the upper 80s to near 90 degrees, all depending on how early the rains get started each day. Overnight temperatures will remain warm because of the higher dew points. Don’t expect much below 75 for the remainder of the week.

As we get closer to September, we’re not just looking out for tropical weather, but also a change in the summer pattern that will transition us into more fall like weather. Models are advertising some changes in the two week time frame. It’s not the time to get excited, since these changes are seen so far out in the forecast. We’ll check to see if the succeeding models stay consistent with these changes. If they hold true, we may see some lows closer to 60 in a little more than two weeks. That would be considered an early cold front for Acadiana! The average time frame for the first “59” is usually around October 1. Last year our first decent front came early in September, but it was at Florida’s expense when Hurricane Irma was hitting. 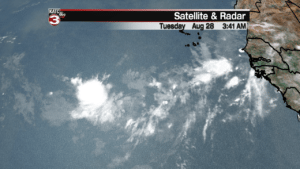 Not much tropical weather to talk about, although waves closer to Africa are looking more impressive. One that has moved off the continent has about a  20% chance for development over the next five days. Models are also showing another robust wave moving off the African coast tomorrow may have some potential too.