The work week will start out rather hot and humid with a better chance for showers and thunderstorms. High pressure aloft, north of the area is giving way, while low level moisture is rounding a Bermuda High pressure system allowing more of a southerly flow out of the Gulf of Mexico at the surface. The result will be dew points back in the mid to upper 70s, a moisture rich column of air, and some good daytime heating. This should produce typical summer time showers and thunderstorms, most of which will occur during the afternoon. 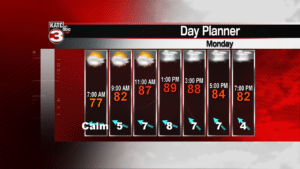 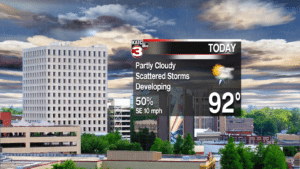 So far we’ve seen a few storms develop along the coast. These have managed to push about as far inland as the LA 14 corridor. As we progress through the day, those storms will start reaching farther inland. A few storms may produce some gusty winds, but most won’t get too intense. Brief heavy downpours and frequent cloud to ground lightning is what we can expect. Storms will dissipate toward the end of the day, and once we lose the daytime heating, storms will retreat back into the Gulf. This pattern is expected to hold through most of the week, so expect a better than 50% coverage of storms just about each and every day. 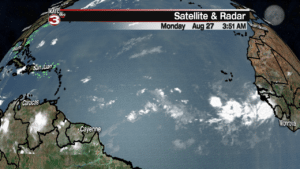 Tropical weather remains relatively quiet. There are a number of upper lows spinning from the northern Caribbean through the Bahamas, then across the central and southern Gulf of Mexico. Nothing too interesting. Most of the Atlantic and Caribbean is clear for now. A robust tropical wave is noted moving off the African coast this morning. Models aren’t really indicating any development during the near term forecast, but long range models seem to be trending toward some lowering pressures over the western Atlantic and northern Caribbean. Nothing looks to be really clear. Although this is also the time we’ll start looking for deeper troughs digging from up north, hopefully sending cooler and drier air our way. Unfortunately, nothing major to report so far.