Across the United States, Starbucks locations were closed for bias training, this after an incident where two black men were arrested last month.

In Lafayette, the location across from Whole Foods on Ambassador Caffery Parkway placed a sign on the door explaining the closure. The building and other across the United States closed at 2:30 p.m. and will reopen at 5:30 p.m. 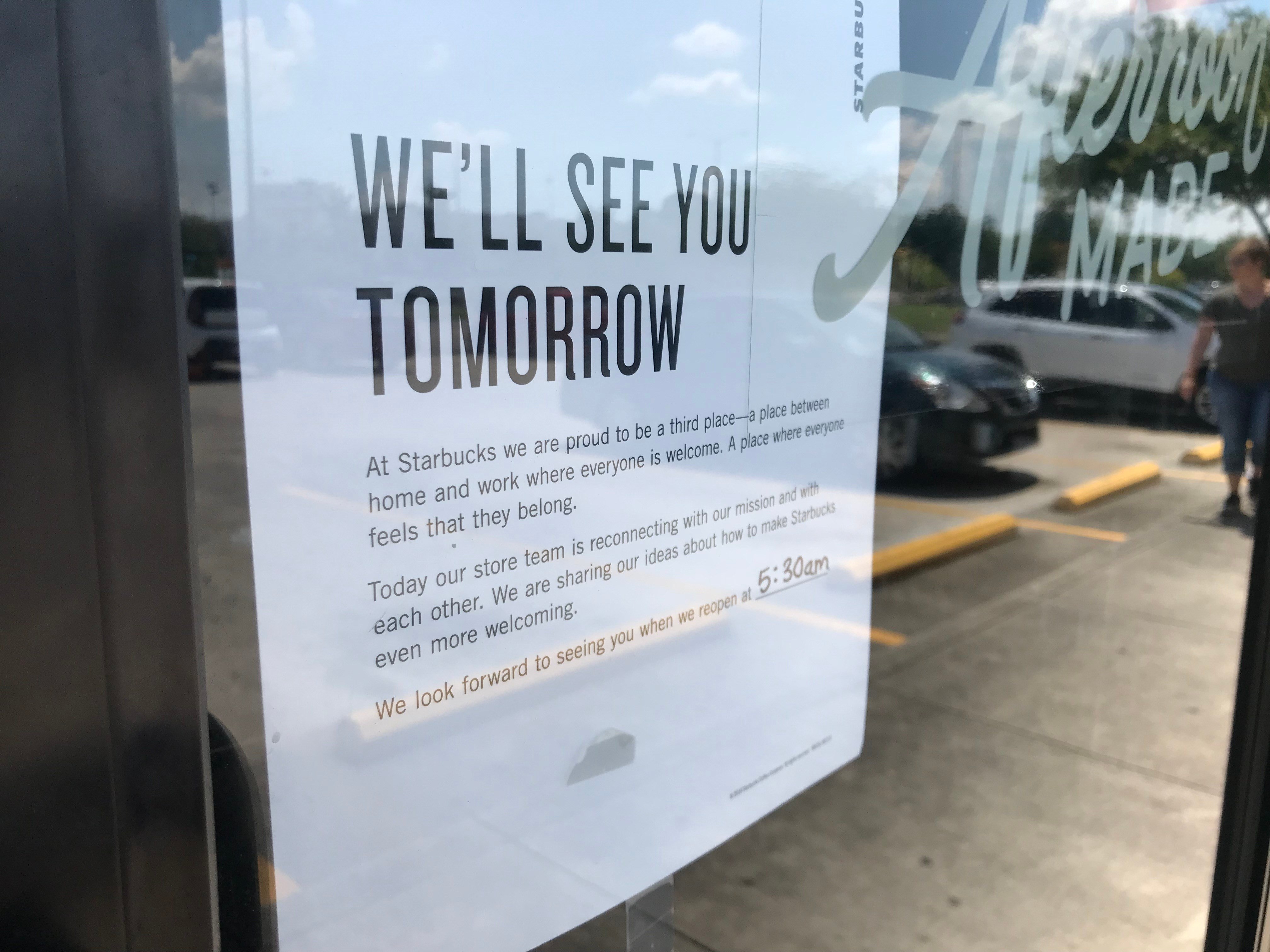 Read more from the Associated Press:

Turning away customers looking for an afternoon jolt of caffeine, Starbucks shops across the U.S. began closing up early on Tuesday to hold training for employees on recognizing hidden prejudices.

It was part of the coffee chain’s effort to deal with the outcry over the arrest of two black men last month for sitting in a Philadelphia Starbucks without buying anything.

After the incident, the company’s leaders apologized and met with the men, and scheduled an afternoon of training for 175,000 employees at more than 8,000 U.S. stores.

Starbucks has not said how much the training will cost the company or how much money it expects to lose from closing the stores during what is usually its least busy time of day.

"It’s quite expensive," Chairman Howard Schultz said Tuesday. "We’ve had certain shareholders call and say, ‘How much is this going to cost and how do you justify this?’ My answer to them was simply: We don’t view it as an expense. We view it as an investment in our people and the long-term cultural values of Starbucks."

The training was not mandatory, but the company said it expected almost all of its employees to participate. It said they will be paid for the full four hours.

According to a video previewing the session, Starbucks executives and rapper-activist Common were to deliver recorded remarks. From there, employees were to "move into a real and honest exploration of bias."

Developed with help from the NAACP Legal Defense and Education Fund and other groups, the session was designed, in part, to give workers a primer on the history of civil rights. The agenda included a short documentary film.

Training in unconscious, or implicit, bias is used by many corporations, police departments and other organizations. It is typically designed to get people to open up about prejudices and stereotypes – for example, the tendency among some white people to see black people as potential criminals.

Many retailers, including Walmart and Target, say they already offer some racial bias training. Nordstrom has said it plans to enhance its training after apologizing to three black teenagers in Missouri who were falsely accused by employees of shoplifting.

In the Philadelphia incident, Rashon Nelson and Donte Robinson were asked to leave after one was denied access to the bathroom. They were arrested by police minutes after they sat down to await a business meeting.

The arrest was recorded by cellphone and triggered protests, boycott threats and debate over racial profiling, or what has been dubbed "retail racism" or "shopping while black."

Nelson and Robinson settled with Starbucks for an undisclosed sum and an offer of a free college education. They also reached a deal with the city of Philadelphia for a symbolic $1 each and a promise from officials to establish a $200,000 program for young entrepreneurs.

Starbucks said the arrests never should have occurred. It has since announced anyone can use its restrooms, even those not buying anything.

Some black coffee shop owners in Philadelphia are suggesting black customers instead make a habit of patronizing their businesses.

Amalgam Comics and Coffeehouse owner Ariell Johnson said she has called the police just once in the two years she has been open. She said that should happen only when there is a provocation or danger.

Calvin Lai, an assistant professor of psychological and brain sciences at Washington University in St. Louis, said people should not place high expectations on this one day.

"We find that oftentimes diversity training has mixed effects, and in some cases it can even backfire and lead people who are kind of already reactive to these issues to become even more polarized," Lai said.

One afternoon wouldn’t really be "moving the needle on the biases," especially with a company that has as many employees as Starbucks, he said. "A lot of those employees won’t be here next year or two years or three years down the line."

Starbucks has said the instruction will become part of how it trains all its workers.