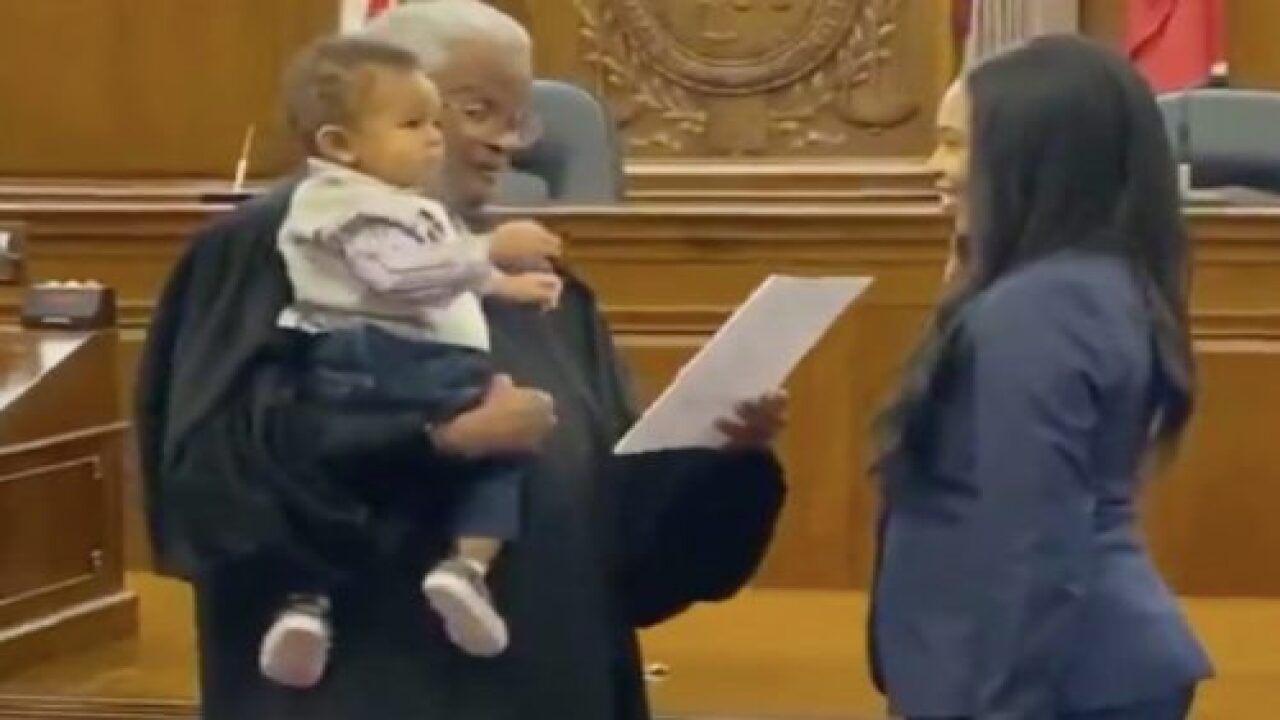 Being sworn in to the state bar after finishing law school and passing the bar exam is a momentous occasion — one that deserves to be shared with family and friends. For Belmont University College of Law graduate Juliana Lamar, the big day was made even better thanks to the presence of a very special guest: her 1-year-old son, Beckham.

The video of Lamar being sworn into the Tennessee State Bar has gone viral, and it’s all down to Judge Richard Dinkins, who really embraced her status as a mom. He offered to include Beckham in the ceremony and even held the tot as he administered Lamar’s oath.

Y'all. Judge Dinkins of the Tennessee Court of Appeals swore in my law school colleague with her baby on his hip, and I've honestly never loved him more. pic.twitter.com/kn0L5DakHO

“On the day of my swearing-in, right before we began, Judge [Dinkins] said he wanted Beckham to be part of the moment,” Lamar, who had previously worked for the judge as a clerk in the Tennessee Court of Appeals, told Buzzfeed News. “And I am so glad he did because to have my son take part in one of the greatest moments of my life was truly a blessing.”

There’s no doubt about it: Judge Dinkins is amazing. But let’s turn to the real superhero of this story. Lamar got through law school while being pregnant, giving birth and then parenting a baby. That’s no mean feat. Her husband, Javon, the one who took the video, is in the U.S. Army and works at a nearby military base.

Here’s a photo of their family, posted to Lamar’s Facebook page in May.

Martin was the first to pay tribute to her “badass” friend, revealing on Twitter that Lamar was “back at school within a week of an emergency C-section before she was even allowed to drive or climb stairs.”

Martin also revealed that Lamar was one of four women in their class who became moms during law school. “Women are amazing,” she wrote.

She's one of four women in our class who became moms while in law school. Women are amazing.

Juggling law school and parenting certainly wasn’t easy for Lamar, who hopes to practice sports/entertainment or corporate law after her judicial clerkship is up in August 2021.

“The pressure I felt was horrible, and I hope it had led my law school to rethink its policies for future mothers,” she told Buzzfeed. “I understand having a child during law school is often a choice — however, as young female professionals, there is not a perfect time for us to have children.”

Hopefully, young women will see Lamar as an example of how you can pursue your career goals no matter what happens in life. And everyone with the power to influence students’ educational experiences should watch the video of Judge Dinkin bouncing baby Beckham on his hip, and think about how they can help to foster a culture of acceptance and support.