Tropical system likely in Gulf by Wednesday & could impact Acadiana 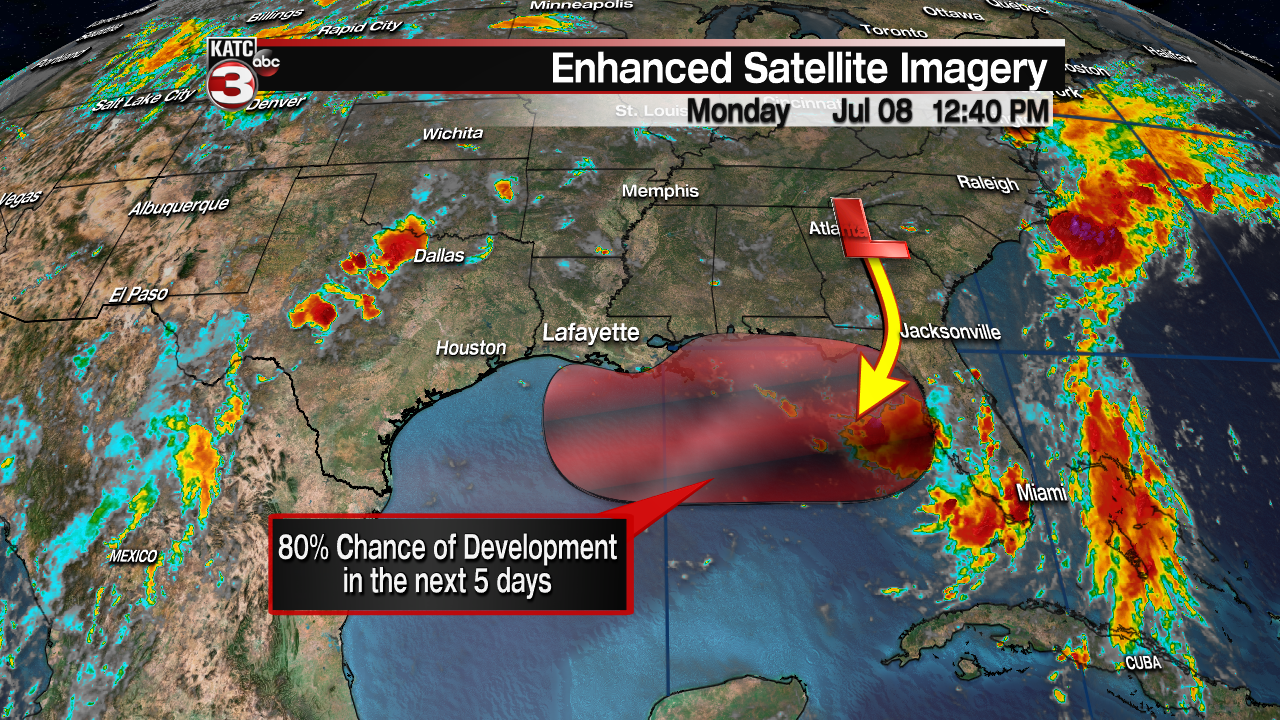 As of 1PM Monday afternoon the National Hurricane Center has increased the chance of tropical development in the Gulf over the next 48 hours to 30% while there continues to be an 80% chance a disturbance forms in the next 5 days.

What we are watching is a broad trough of low pressure over central Georgia right now.

This low is expected to slowly drift south over the next 24-36 hours and make its way into the northeastern Gulf near the Big Bend region of Florida by Tuesday evening.

Once it enters the Gulf late Tuesday into Wednesday conditions are favorable (very warm waters and low shear) for this low to become tropical in nature and gradually strengthen.

Most models have the low strengthening to a tropical depression or weak tropical storm (Barry) by Wednesday evening/Thursday morning as it drifts to the west just south of the Alabama-Mississippi coast.

Beyond Thursday morning that is when we lose the mid-range model data and have to look at the long range models and upper level flow to figure out where the system will eventually head next.

So, looking at the upper level wind flow at 500 mb or 18,000 feet we see that the low will be situated between 2 large upper level ridges of high pressure, one in the four-corner region and the other over the Bahamas.

The models seem to agree that the ridge over the four corners region will be the dominant feature and steer the tropical system to the west in the Gulf moving it just south of the Louisiana coast on Friday.

Both the Euro and GFS models keep the low on a westerly track with the system eventually pushing onshore along the Texas coast near Houston on Saturday.

The big difference between the models continues to be the intensity of the potential system with the Euro showing a strong tropical storm or maybe even a low-end category 1 hurricane while the GFS keeps the system much weaker as a low-end tropical storm, so there is still lots of uncertainty with this system but the longer the system stays out in the Gulf the higher the probability it has to get organized and strengthen.

But the big takeaway today is with the potential track further to the west towards the Texas coast that could cause more of an impact for Acadiana as it would put us on the eastern side of the storm, which is the sloppy side of tropical systems, meaning we could see the possibility of heavy rains and coastal storm surge of 2-4+ feet.

Thus, here are the things you should be doing now to prepare just in case it ends up heading our way.

Heavy rains look to be the biggest threat with the possibility of 6-12+ inches of rain in spots closest to the center so now would be a good time to check the storm drains around your home and neighborhood to make sure they are clear of debris.

Also, you should try to clean your gutters as well to make sure the water doesn't get stopped up and cause roof leaks.

The good news is most of the local rivers are fairly low from the hot and dry weather, as the Vermilion River sits below 6 feet, so the bayou and rivers should be able to take in a good bit of water before they start flooding.

To go along with the heavy rain threat, those that live along the coast will have to watch out for the coastal flooding lasting up to a couple days as there could be a persistent onshore flow thus you might want to make sure you have enough food and water to last a few days in case the roads flood and you can't leave.

That said, the forecast could and will likely change over the coming days so check back with KATC for the latest on this potential tropical system.