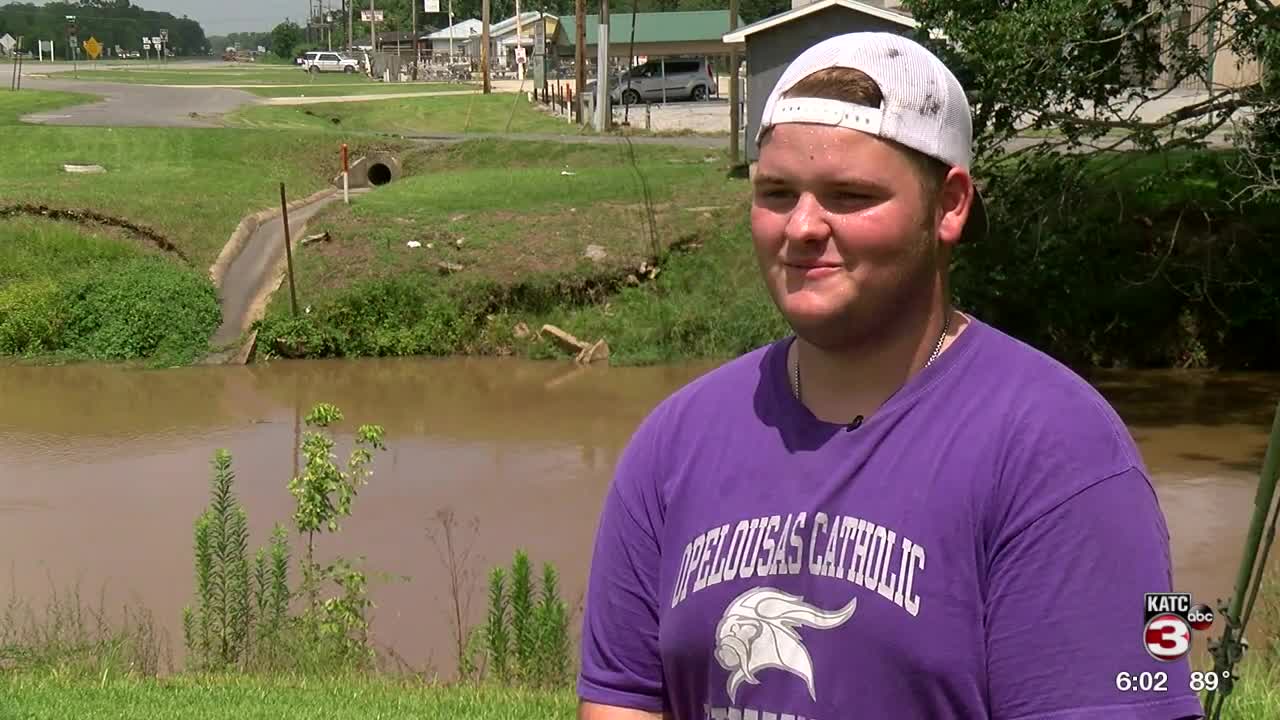 But like it or not, his selfless immediate call-to-action earlier this week makes this young man a hero ---by any standard, by any definition.

And the Port Barre police chief agrees. “Not everybody has that in him,” concurs Deon Boudreaux. “He’s a natural born hero, that’s what he is.”

At 10:54 Monday morning, a 66-year old driver, coming off of Highway 103 in Port Barre, couldn’t handle the turn for some reason, hit a sign, and then headed for the waters of the Bayou Teche.

The car quickly hit the water, started drifting away, real quickly. 17-year old Hunter Runyon saw it all, and that’s…when a hero was born.

Wasting little time--- the Opelousas Catholic senior turned his car around, drove next to the bayou, and quickly made his way into the water.

“So, basically when I got to her, the car was completely submerged (like this) yes sir and back here, she just had a little pocket of air left.”

But then came the matter of getting the victim “out” of the car? “I basically told her to hold her breath and tried to break the windows but couldn’t; and I tugged and tugged on the door and couldn’t get it,” explains Runyan. “But finally, I tugged one more time when she barely had a pocket full of air and I told her to hold her breath and I finally ripped the door open.”

And being able to get that door open? Runyan firmly believes he had some help.

“And I’m not just saying that to say that, I really do believe God truly had something to do with me and her getting out of the situation we were in,” says Runyan.

Hunter Runyan freed the victim’s feet caught in the headrest, and then, with a now-unconscious driver in his arms, he reached the surface, and its strong current.

“Whenever she woke back up, she kind of freaked out and started fighting the water and we both went underneath the water,” says Runyan.

“And then there was a moment, a moment when Runyan thought when this might not work out. “(And you didn’t know?) Yes, sir. (Did you have doubts about your safety?). A few times throughout I didn’t think either one of us would make it through. My main goal was just to get her out of the water and keep her out of the water as long as I could.”

Nearby police officers and trustees formed a human chain and helped Runyan and the woman get to the bank and get to safety. “The whole time she was just thanking me and thanking God for me and stuff like that.”

Which brings us back to the word ‘hero’.

“He knew, he knew someone was in danger and needed help,” adds Chief Boudreaux. “He didn’t hesitate; he risked his life to save someone else’s.”

But in the truest sense of a hero-- humble and selfless--Hunter Runyan doesn’t want to be considered one.

“(Will you allow other people to call you a hero and say thank you?). If they have to, then, yes sir, I will say ‘thank you’.