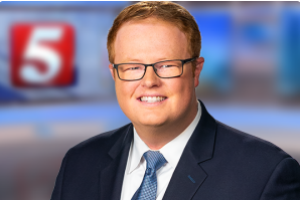 Chris Davis returned home to NewsChannel 5 in January, 2020, this time as a Reporter. Chris grew up watching NewsChannel 5, interned at the station in college and started his broadcast career here as a Producer and Assignment Editor.

The last few years, he’s spent reporting at WHNT-TV in Huntsville, Ala. and KSDK-TV in St. Louis, Mo. He’s been nominated for two MidAmerica Emmys, a Midsouth Emmy and won First Place in the Alabama Associated Press Awards for his series profiling sailors aboard the U.S.S. Dwight D. Eisenhower aircraft carrier. Chris has also had some luck covering a few National Championships in Alabama and the Blues Stanley Cup run in St. Louis. He hopes his Tennessee Titans or Nashville Predators are next!

Chris is a proud Clarksville, Tennessee native and Middle Tennessee State University graduate. When he isn’t covering politics or telling stories around the mid-state, Chris is either finding a new hiking trail, correcting his slice on the driving range or fishing with his Dad.