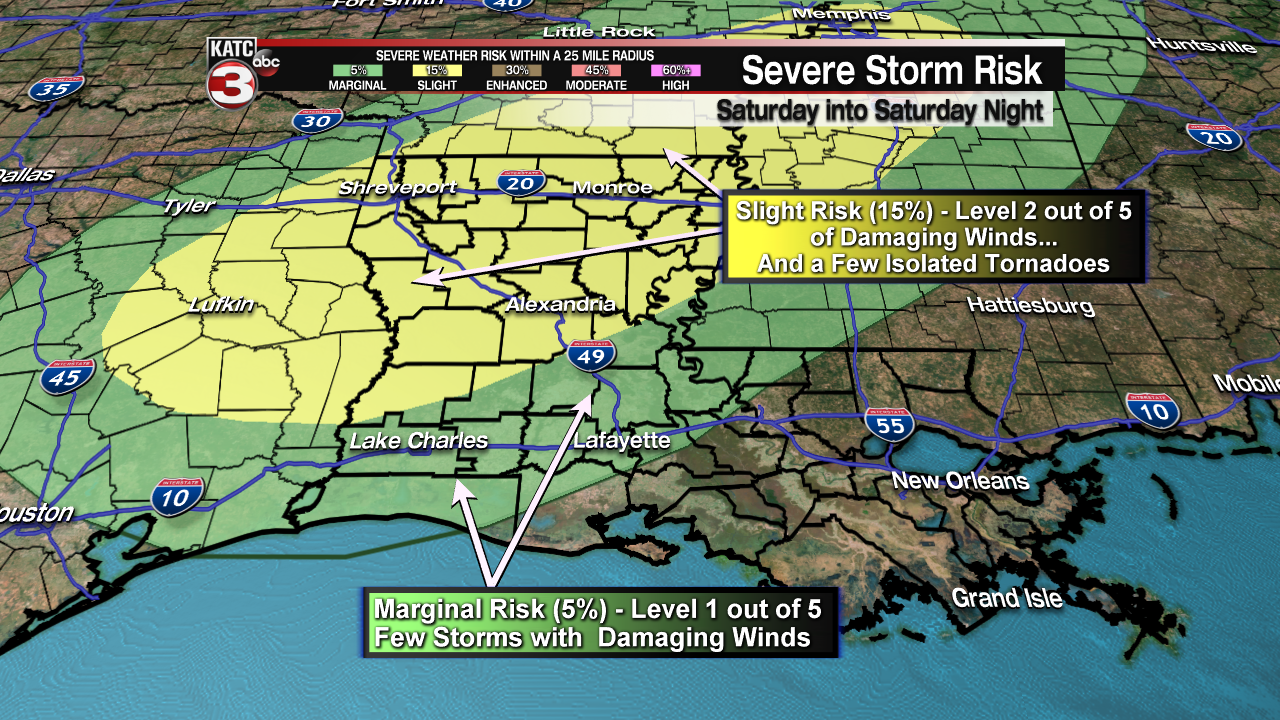 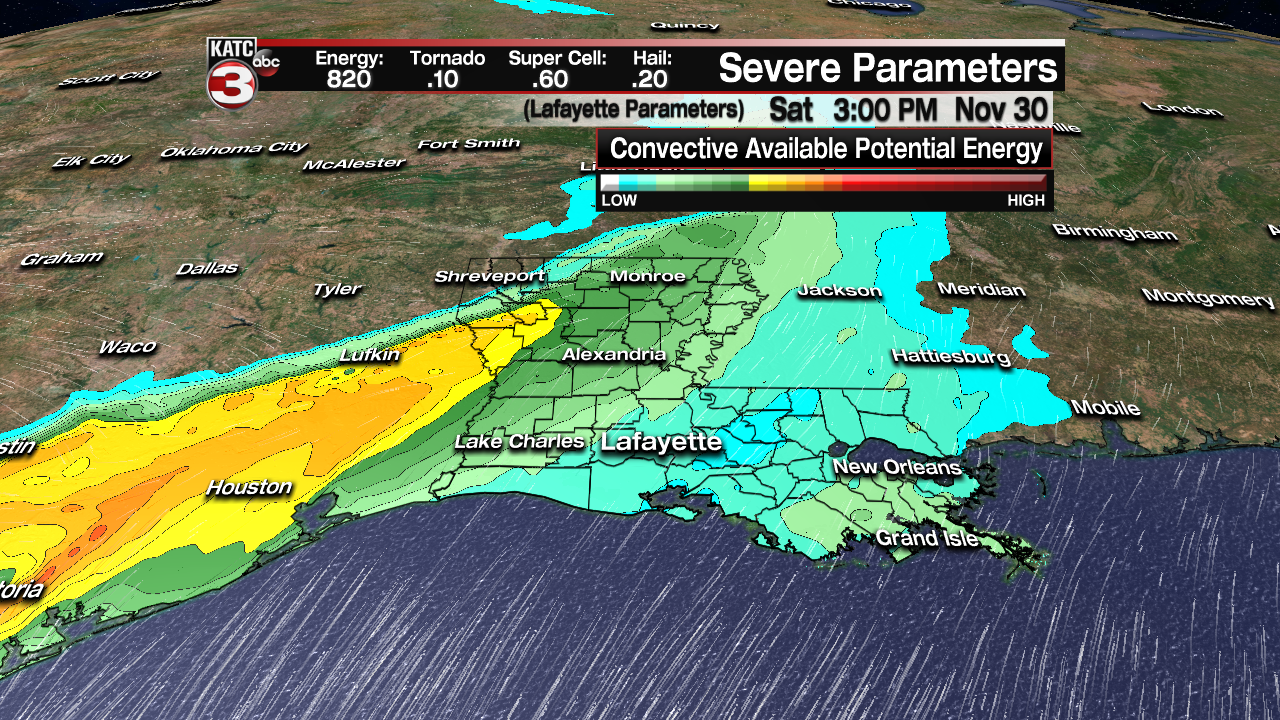 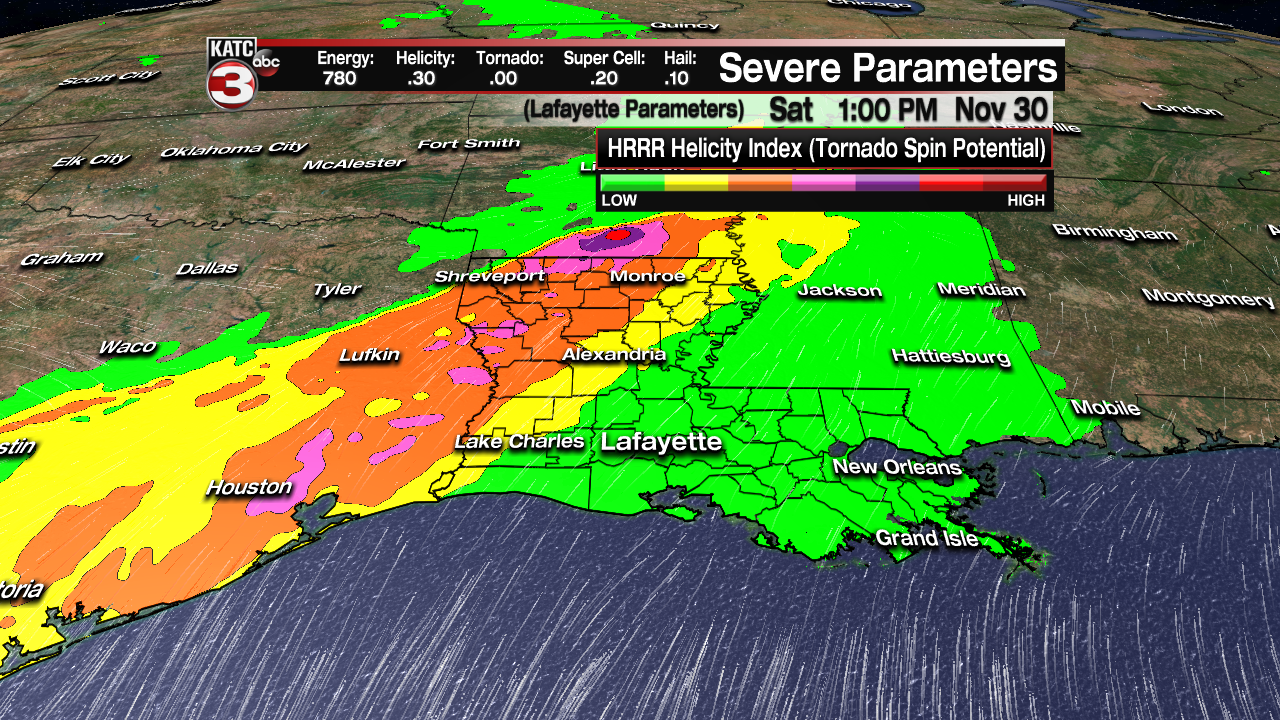 Saturday will be a mostly cloudy, breezy and warm day for Acadiana, but a cool front approaching later at night will generate scattered showers and a few thunderstorms with clearing and cooler weather anticipated for Sunday.

In the near term, expect temperatures to bottom out in the low-mid 60s shortly after midnight and perhaps rise a degree or two by daybreak.

It remains unclear as to whether fog will develop by morning with breezy southeasterly winds anticipated overnight...but there could be some thick spots especially near water areas and the fog will likely be of the sea-fog variety which is less wind-sensitive.

During the day Saturday look for mostly cloudy skies with a few sun intervals pushing afternoon temperatures into the upper 70s to lower 80s.

Breezy south-southwesterly winds will dominate most of the day near 15-22 mph with a few gusts to 25-30 mph during the afternoon.

There could be a few widely scattered quick-passing showers Saturday afternoon, with rain chances near the 20% range.

Heading into Saturday evening, rain chances will gradually ramp upward as a cool front approaches the region around midnight...give or take a few hours.

Rain chances look to increase to roughly 40% Saturday evening and then near 80% as the front approaches the area around midnight, give or take a couple of hours..

You probably won't need jackets or sweaters for the Cajun Football game Saturday evening, but you might need the rain gear just in case...highest rain chances should arrive an hour or two post game.

Get out there for history as Cajuns can win their record 10th game!

As anticipated yesterday, the Storm Prediction Center (SPC) has indeed lowered the risk of severe storms tomorrow for Acadiana to "marginal" at worst, primarily for the northwestern half of Acadiana from Lafayette on northwestward.

A greater (slight) risk of strong storms will be more likely from Eastern Texas into Northern Louisiana where storms containing damaging winds and perhaps an isolated tornado or two will be possible primarily during the afternoon into the early evening hours.

As the front nears Acadiana deeper into the night, it appears that most of the severe weather dynamics will weaken significantly...that doesn't necessarily mean we won't see a severe storm, but the risk is down near or below the 5% threshold for most areas.

Showers and a few storms will advance through the area much more quickly than the last front so rain totals will likely be well be a quarter inch or less...and in most spots, near a tenth of an inch unless you get caught in one or two of the isolated thunderstorms that may be possible.

Thereafter it's relatively smooth sailing in the weather department, with sunny, breezy and progressively cooler conditions Sunday into Monday, and into Tuesday morning.

Highs Sunday will be in the mid-upper 60s, with readings dropping into the chilly lower 40s (wind chill not included) Sunday night into Monday morning.

Monday's highs will be limited to the mid-upper 50s in spite of full sunshine while temperatures into Monday night/Tuesday morning are expected to drop into the chillier mid-30s.

Tuesday and Wednesday look to be mostly sunny with temperatures slowly moderating into Thursday ahead of our next weather system that is expected to arrive by Thursday night into Friday morning.