UPDATE: The Rolling Stones’ appearance at the 2019 New Orleans Jazz and Heritage Festival has been canceled.

Mick Jagger wrote on Twitter: “I’m so sorry to all our fans in America & Canada with tickets. I really hate letting you down like this.
I’m devastated for having to postpone the tour but I will be working very hard to be back on stage as soon as I can. Once again, huge apologies to everyone.”

Anyone who bought a ticket can expect information regarding refunds and VIP packages soon.

NEW ORLEANS (AP) – The New Orleans Jazz and Heritage Festival has got satisfaction: The Rolling Stones are among the headliners for the 50th anniversary festival.

“Fifty years is very rare and to be here, still, just as strong, just as relevant is amazing,” festival producer Quint Davis said.

“For the Rolling Stones and Katy Perry – two of the most highly produced artists – to want to come play our festival, held in a tent, during the day with the scent of BBQ and oyster po-boys wafting over the field, that’s just incredible.”

Perry is scheduled to perform April 27, the first Saturday, while the Stones will take over the festival’s largest stage Thursday, May 2.

Seeing the Stones’ performance will require a special ticket good only for that day. Cost? $185.

Tickets go on a pre-sale Thursday for Louisiana residents only, to buy tickets for the Rolling Stones’ date. Up to two tickets can be purchased on the Plaza level of the Superdome from 10 a.m. to 6 p.m.

Tickets go on sale Friday for the entire festival at 10 a.m. in New Orleans or at www.nojazzfest.com or www.ticketmaster.com or by calling 1-800-745-3000.

For the first time, the festival’s 11 other stages will go dark when Jagger and company hit the stage.

“Even though it’s going to be a full fest day, with performances on all 12 stages, we don’t want the stages where the Stones aren’t performing to compete for an audience,” Davis said. “We don’t want the other stages to not have any people there, so we’re gonna shut them down about an hour before the Stones perform, encourage them to get something to eat, to get a good spot and enjoy the show.”

Bazzle said she can’t believe 50 years have passed since she first took to a festival stage.

“It’s just mind-boggling,” she said. “It’s also overwhelming and very humbling to have an opportunity to do what I love doing and work with such quality musicians. I just can’t believe it. I’ll believe when I’m on that stage this spring!”

For more on tickets and special ticket prices, visit nojazzfest.com. 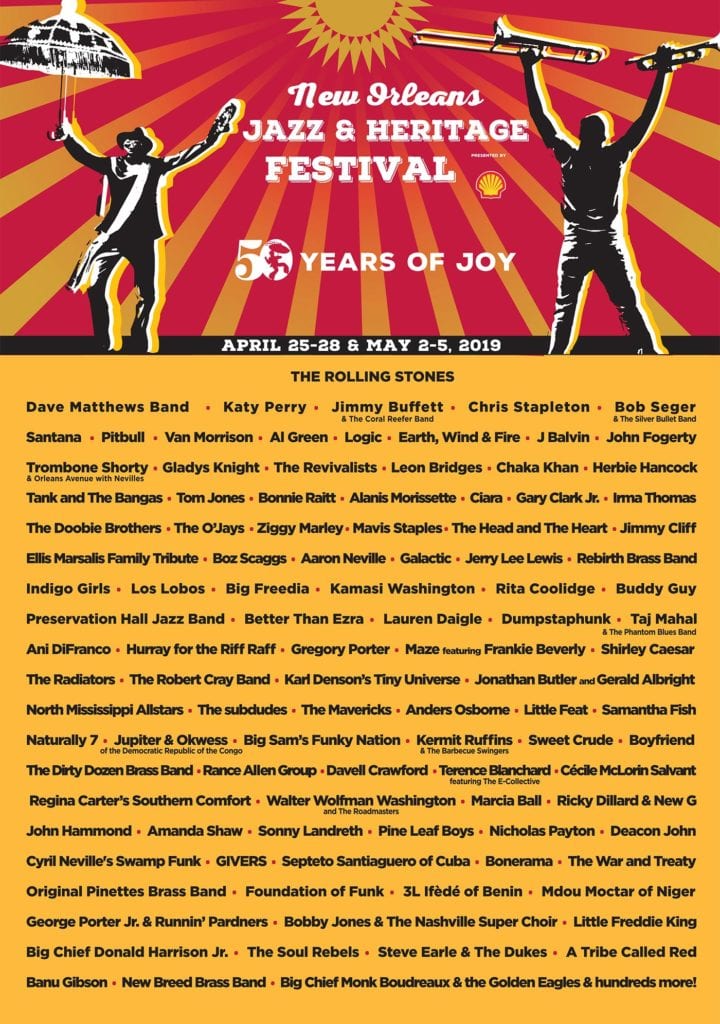