Pope sues city officials for accessing their own server

Lafayette City Marshal Brian Pope has filed a federal lawsuit because city officials responded to a public records request from a local newspaper.

Pope, who is under indictment for several felony charges in connection with the situation, filed suit last week. You can read the suit yourself by scrolling down.

The suit, filed by former Assistant U.S. Attorney Brett Grayson, who also is representing Pope in the criminal case, accuses former Chief Administrative Officer Dee Stanley and former City Attorney Mike Hebert of violating a federal law that prohibits people from accessing the computers of others and taking information. It claims that Stanley and Hebert shouldn’t have accessed Pope’s emails on a City-Parish server because he is “independent” of LCG and is just an internet customer of LCG.

The incident in question started with a public records request by The Independent newspaper. A reporter for the paper made a request of Pope for emails related to a press conference he had that was critical of Mark Garber, who at the time was a candidate for and now is serving as Sheriff of Lafayette. Pope was a supporter of Garber’s opponent, and The Independent staff suspected that Pope had worked with either Garber’s opponent or his opponent’s campaign staff to set up the press conference. At the same time they made the request to Pope, they made the same request to LCG – since Pope’s work computer was on an LCG server.

Pope responded to the Independent’s request, and so did LCG. But the documents produced did not match – Pope did not surrender some of the records that LCG did _ and so the Independent filed suit against Pope, demanding that he properly respond to the request. During the process of that suit, Pope gave depositions, and later testified in court, about the requests. His perjury indictments stem from that testimony; he’s accused of lying under oath about the existence of certain records. A state judge already found him in contempt of court for failing to provide emails to the Independent, and he served a house-arrest sentence for it. He’s currently under orders to complete community service for that conviction, since his appeals have all been rejected.

Pope was indicted twice last year on criminal charges; the first indictment was dismissed and replaced by the second, which added several new charges. He’s currently awaiting trial on two counts of perjury and five counts of malfeasance in office. In total, he faces up to 35 years in prison and fines of up to $45,000 if convicted on the charges. One of the attorneys who was advising Pope at the time of the original public records request also was indicted, and is awaiting trial on a perjury charge.

Pope’s lawsuit against LCG claims that his office is “a governmental unit independent and separate from the LCG.”  LCG also funds Pope’s office; his office is funded through the city-parish budget with $1.7 million in personnel, insurance and transportation costs. Here’s the City-Marshal page from LCG’s most recently adopted budget. You can read the entire budget by clicking here. 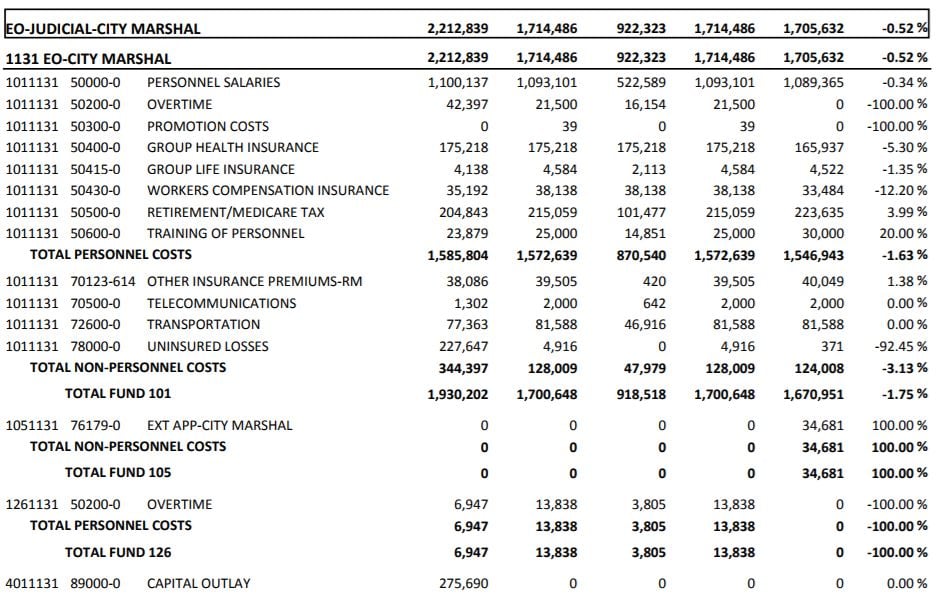 The suit lays out the position that Pope’s office is simply an internet customer of LCG, and that LCG officials illegally accessed his emails to comply with the public records request sent by the Independent. It alleges that LCG officials violated Pope’s privacy rights and caused him to cause “economic harm.”

The suit also says that the released emails caused Pope to have to “defend state criminal charges arising from the unauthorized access.” The suit asks the court to award punitive damages and attorney fees.